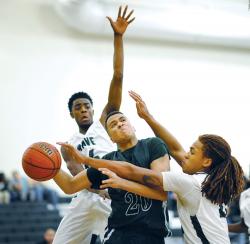 It seems every year Freehold Township High School finds a way to win a Shore Conference A North Division title.

Last year, the Patriots emerged out of the pack to capture the public school crown and were the only team to defeat Christian Brothers Academy.

Graduation hit last year’s division champions and NJSIAA Central Jersey, Group IV finalists hard, but head coach Brian Golub will have another deep bench that he will use to wear teams down.

The Patriots have trusty point guard Nick Facendo and center John Carroll back. They will be the foundation of the 2015-16 team.

The Patriots are not without talent and are relying on players making the jump from the junior varsity team to the varsity. How quickly they make the adjustment will determine just how good this year’s team will be.

Golub expects his team to remain competitive while still being a work in progress that looks quite different in February than it does in December.

“We have more size than we’ve had in the past and are still pretty athletic, but we are a long way from championship quality,” the coach said.

“Hopefully in February, we will be much better and much more experienced.”

At Colts Neck High School, veteran head coach Lou Piccola is poised to have another season that goes into March.

“We have a number of upperclassmen with experience,” he said. “We’re seniorbased. It should be a fun year.

“We should be competitive. It comes down to staying healthy.”

Senior guard Lloyd Daniels could be ready to join the Shore’s elite this winter. The 6-foot-3 Daniels has proved to be a clutch shooter for the Cougars and can score from the inside or outside.

Piccola said his club will look for mismatches with their size. Moustafa provides inside power, which is an added dimension for the team.

Seniors Jordon DeGroot, Tom Cavrak and Brandon Yutko will look for those mistakes and help out with the scoring.

Because of their front-line size, the Cougars will look to push the ball up the floor off defensive rebounds.

Juniors Chris Aquinas (forward), Brendan Clarke (guard/forward), Ronnie Anderson (forward) and Brandon Danis (guard) and sophomore Robby Hill (forward/center) complete a Cougars team that will be in the hunt for the B North Division title again this season and look to make a deep run in the Shore Conference and NJSIAA Central Jersey Group IV tournaments.

It was a historic year for Howell High School, which secured the first home state playoff victory in program history.

The Rebels qualified for both the Shore Conference Tournament and state sectional playoffs. As they look to duplicate last year’s success, they will do it without five graduated players, including highscoring Aaron Trimble and Will Kocsis, who are both playing for Brookdale Community College.

Matt Morton, a senior guard who played in every game last winter, is the most experienced returnee. Also back are senior forward Steven Palumbo, who saw limited playing time last year, and Matt Morton’s young brother, Alex, a sophomore guard who gained valuable experience as a freshman.

“We are a young and inexperienced team and are building for next year and the year after,” head coach Patrick Ramsey said.

Ramsey is looking to a number of players from last year’s 19-5 jayvee squad to build this year’s team around.

With the graduation of Trimble, Ramsey expects the Rebels to spread the scoring.

Rick Garretson’s Manalapan High School team, winners of the Huskies Holiday Tournament last year and a Shore Conference Tournament and state qualifier, also lost a lot to graduation, including Kyle Mullen, who was Huskies MVP and a big inside force.

“We are a young but talented team that can compete with anyone in our conference,” coach Garretson said.

Marlboro High School head coach Michael Nausedas has steadily been building the program to the point that it is a consistent postseason qualifier, and he expects that growth to continue this year.

The last couple of seasons have been about developing talent and overall athleticism so that the Mustangs can go to the bench without a dropoff in play. That development will be on display this year.

“Our strength is our depth. We can play 12 guys,” Nausedas said. “We hope to be a quick team on both sides of the ball.

“Our goal is for our defense to ignite our offense. Because of our depth, we are hoping to play that style.”

The coach added that depth will be needed because of the nightly challenge that the A North Division presents.

The Mustangs have a mixture of seniors, juniors and sophomores.

At Freehold High School, head coach Jesse Ryan will count on the experience the young Colonials gained last winter to be a difference-maker this season. The Colonials played several sophomores and freshmen in 2014-15, and they are now a year older and experienced.

The Colonials are a very athletic and quick team that will look to wear teams down with their depth. Worthy appears to be the player who can give the team doublefiguring scoring each night. Ryan, though, will look to get scoring contributions throughout the lineup in order to get back to the postseason and compete in A North.

Another thing working for the Colonials is that they have players like Curry, Worthy and Gill, who are proven winners in other sports (football).