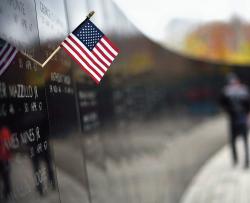 A flag hangs on the wall of names during the Veterans Day ceremony that was held at the New Jersey Vietnam Veterans’ Memorial, Holmdel, Nov. 11. STAFF PHOTOGRAPHER ERIC SUCAR This is in response to Ray Kalainikas’ letter, “Pledging Allegiance to Flag is Self-destructive.”

Sorry Ray you feel that way. Think about it — if it weren’t for all the heroes who took the pledge of allegiance, acted patriotically and fought and died for “that flag,” we all might be living here under much different laws, and you probably wouldn’t be able to voice your opinion as you did.

As I see it, the climate in our country is changing for the worse. I’m afraid that when (God help us) the time comes when heroes again choose to fight in a world war to defend our freedom and way of life, they won’t have the total support from people living here.

I am in total agreement that as free citizens living in the greatest country in the world, we can believe in whatever we want, but when push comes to shove, if we want to continue to think and act freely, we must and should rally behind our country. If that symbol of freedom happens to be the American flag, then we should respect it.

Let me ask you, did you write a similar letter after the 9/11 terrorist attacks on our country when there were many property owners displaying the flag and people pledging allegiance to the flag?

We should proudly display the American flag on our property (as I do) if you wish. If you should choose not to, that’s your right.

Let’s all be proud to be Americans. God bless America.