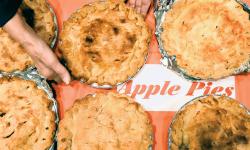 Tasty homemade apple pies tempt visitors attending the 50th Apple Festival sponsored by the Madison Township Historical Society, Old Bridge, on Nov. 8. SCOTT FRIEDMAN According to the American Heart Association, smoking is responsible for killing more than 480,000 Americans annually – including 11,800 New Jerseyans – making it the number one cause of death.

It’s no secret smoking results in heart disease, stroke, cancers and many other devastating health issues. Yet smoking remains a crisis in the Garden State, especially when it comes to our youth.

In fact, 95 percent of smokers start the habit before the age of 21. Each year, 24,500 New Jersey youth try cigarettes for the first time while 5,400 children become new regular, daily smokers.

As a pediatrician, I support every effort to deter tobacco getting in the hands of our kids. I’m advocating for the passage of the Tobacco 21 bill (A3254), which would reduce youth tobacco use in New Jersey by raising the minimum legal sales age of tobacco products to 21. Modeled after a similar effort in Massachusetts which saw a 50 percent decrease in youth smoking, this bill would help protect our adolescents from making a decision which would negatively affect their health for years to come.

We know that this plan works. It’s seen success in Needham, Massachusetts, Hawaii and several other locations including New York City. We saw success with a similar approach was taken to address underage drinking. We raised the minimum purchasing age to 21 and saw drops in highway alcohol-related deaths and high school drinking. Although teen drinking wasn’t eliminated, the problem substantially improved. It’s our hope that we can gain similar success with Tobacco 21.

It’s time for New Jersey to act. With little/ no cost to tax payers and the improved welfare of our children, saying “yes” to Tobacco 21 is the right choice to make.