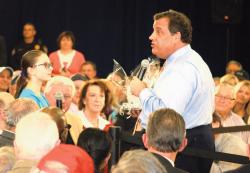 “The bill [A1259/S873] on my desk, I have not read yet. But from what I’ve been told, it looks exactly like the last one I vetoed, so I guess they thought I wasn’t serious. And if that’s the case, I’ll end up offering a compromise again,” Christie said when asked about the “Birthright Bill” that would grant adoptees the ability to access their original birth certificates.

Christie had first suggested a compromise after he conditionally vetoed the bill in 2011, aiming to retain the privacy of biological parents and give adoptees the ability to access medical information. 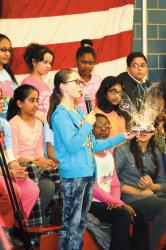 PHOTOS BY STELLA MORRISON/STAFF Other questions from those who attended the governor’s 117th Town Hall meeting ran the gamut from heroin addiction, school vouchers, longer school days and high-tech jobs.

There was also a lengthy discussion on Christie’s opposition to approving recreational use of marijuana after the governor was questioned by a woman whose 14-yearold son uses edibles for medicinal purposes.

“We’re not going to turn our state into a place where people fly in to get high,” the governor said.

Christie delivered a short opening address at the meeting, which was held at the St. Stanislaus Kostka Church gymnasium, before taking questions from audience members.

His talk noted progress in Sayreville’s storm recovery and the outlook for future efforts, which would focus on storm resiliency.

“Not only are we getting people back in their homes, but [we are working] to make infrastructure stronger and better,” Christie said. “We are trying to make this state stronger for the next storm.”

Sayreville and South River were the first two towns to receive funding from the New Jersey Department of Environmental Protection (DEP) for flood mitigation buyouts, an announcement Christie made last May in the same gymnasium.

So far, the DEP has made 196 offers to purchase homes, residents have accepted 120, and 47 closings have been completed. Demolition of some houses began last month.

“Those who were in the path of the storm on Oct. 29, 2012. … It’s something you will never forget,” Christie said. “We need to be ready next time to try to make sure that when it happens again, it won’t be nearly as severe as what happened to us last time.”

Borough resident Theresa Mills, whose home in the Old Bridge section of Sayreville was damaged by the superstorm, thanked Christie and his staff for the help she received from the state since the storm.

“I just wanted to say, ‘Thank you, and keep on doing what you do,’ ” Mills said.

Following the Town Hall, representatives of several state agencies were on hand to discuss Sandy recovery issues one-onone with those affected by the superstorm.

Resident Lillian Lukacs of Quaid Avenue said she spoke with a DEP representative regarding drainage issues on her street that contributed to the severe flooding she experienced during Sandy.

“In lower Sayreville, the water goes in ditches. And during Sandy, there was just too much water,” said Lukacs, who expressed concern that the streets in her neighborhood would flood again. “It needs to be addressed. … The DEP said that it should be addressed.”