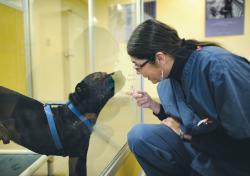 Spay/Neuter Clinic Manager Dawn Cover offers some affection toward pit bull Kermit at the Monmouth County SPCA in Eatontown on Dec. 14. The SPCA is among many shelters experiencing high volumes of pit bulls. STAFF PHOTOGRAPHER ERIC SUCAR A visit to any local animal shelter will likely reveal the same problem — an abundance of pit bulls due to overbreeding, abuse and neglect.

Area shelters are stepping up efforts to offer vaccinations, spaying and neutering, and microchipping, as well as education and awareness, to reduce the percentage of pit bulls coming through their doors. “Eighty percent of our shelter is pit bull or pit bull mixes, and it’s like this at most shelters across the country,” said Dawn Cover of the Monmouth County Society for the Prevention of Cruelty to Animals (MCSPCA), which has launched the Pittie Project.

Assistant Manager Melissa Torres leads a pit bull named Friday inside after getting some exercise in the outdoor area at the Monmouth County SPCA in Eatontown on Dec. 14. STAFF PHOTOGRAPHER ERIC SUCAR Throughout the year, pit bulls make up 55 percent of the resident canine population at the MCSPCA, Cover said. But due to the perception that pit bulls are fighting dogs, only a tenth of the adoptions include these breeds.

“It’s a real problem that most people tend to ignore, so we started [the Pittie Project] to make a difference,” she said. “I hope that in a few years when I walk through the shelter there won’t be so many pit bulls.”

Jill Caren, a photographer from Monmouth County, is also raising awareness through “Good Pit,” a photojournalistic story of “bad-pit-bulls-gone-good” and a resource for education and awareness.

“These are the dogs that are abused, neglected and deemed not adoptable, and it’s showing how these dogs who couldn’t be adopted are now living with families,” Caren said, adding that the project originally started as a Facebook page to promote the positive side of the breed.

Soon after adopting her own two pit bulls, Caren became pregnant and was told that the dogs wouldn’t be good with children.

“It took me on this journey, and I started to look into it more. As I started working with the shelters, it dawned on me that [nearly] every dog in the shelter was a pit bull breed or mix,” she said.

“When I realized that my photography was making an impact and that dogs were getting adopted because [people] fell in love with the picture, it made me realize that imagery can have an impact on emotions.”

Caren works specifically with the Woodbridge Animal Shelter and Pet Adoption Center, whose canine population is 50 to 70 percent pit bulls or mixes, most of which were found wondering the streets and are hard to place in homes.

The low adoption rate is a result of the perception that the breed is aggressive. When people see pit bulls jumping and barking in a cage at a shelter, they take it as a sign of aggression, she said.

“There is a misconception the pit bulls were bred to fight, but it’s not true,” she said. “Pit bulls date back to the 19th century. They arrived here as a pet of choice in the early 20th century. They are loyal, and that is why they do so well with guarding. They want to make their owners happy.”

The Associated Humane Society in Tinton Falls reported that its population is 70 percent pit bulls, but in northern New Jersey the percentage is as high as 90 percent.

“Eleventh Hour Rescue takes in the hardest cases,” Caren said. “We call them death row cases because many are not adopted.”

In many communities, pit bulls have become a status symbol or money-makers for dog fighters, which is causing over-breeding and abuse, Cover said.

Cover recalled a 9-year-old female dog in the Pittie Project who had been bred every heat cycle, because a female pit bull can have a litter of six to eight pups.

“It’s like this constantly. I see it all the time,” Cover said. “They are one of the most abused breeds.”

The darker side is the dog fighting, and Cover said a problem has developed in Monmouth County with what is known as “trunking.”

“They actually have older cars with bigger trunks. They put phenomenal sound systems in them, stick two pit bulls in the trunk, and will ride up and down the street until the dogs don’t hear anything anymore,” Cover said. “When they stop, whatever pit bull is still alive is the one that wins.”

Cover said that she goes into neighborhoods with high populations of pit bulls and speaks to their owners. Sometimes she will give what she calls a “Ten Cent Tour,” which involves taking an individual on a tour of the MCSPCA to show the reasons for her campaign.

Since starting the Pittie Project in March, Cover has spayed or neutered 300 pit bulls, and vaccinated and microchipped hundreds more.

To learn more about the Pittie Project visit www.monmouthcountyspca.org.