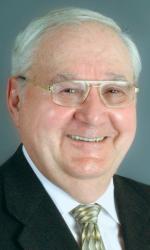 “He was the best father in the world … my best friend,” his son Richard said. “He was always active with my three brothers and I. Any activities we were involved in, he was always there for us, even when he spent long hours when he ran the restaurant seven days a week.”

The elder Dalina owned and operated Dalina’s Tavern and Restaurant in the Fords section of Woodbridge for more than 55 years.

But his true calling was public service.

Dalina served on the Woodbridge Township Council for 12 years, including four as council vice president and two as president. In 1990, he was elected to the first of eight terms that he would serve on the Middlesex County Board of Chosen Freeholders. He served as the board’s deputy director from 1994 to 2008 and as director in 2009.

Dalina announced in February that he would be retiring from the freeholder board at the end of this year.

Middlesex County Democratic Organization Chairman Kevin McCabe said Dalina was a pillar of leadership in Middlesex County and an inspiration to others who served the community.

“Pete was a man of conviction who never forgot where he came from,” McCabe said. “He was guided by the fundamental belief that the youth of today are tomorrow’s leaders, and worked tirelessly to ensure that they retained connection to their community no matter where life’s road led them.”

Richard Dalina, who currently serves on the Woodbridge Township Council, said he and his three brothers try each day to follow in their father’s large footsteps the best that they can.

“My dad has touched so many people’s hearts,” he said. “To hear all the tributes and to see all the nice words says a lot about who he was and that he was loved.”

Richard Dalina said his dad was his mentor, and the two regularly talked about everything from politics to sports.

The elder Dalina was an exceptional athlete during his younger days. He played college football and even had a chance to play professional football. He lettered in three sports at Woodbridge High School and was named to the all-county football team.

Richard Dalina said his father first went to Stetson University in Florida before transferring to Villanova University in Philadelphia, where he played football.

“He actually was invited to play for the New York Giants,” he said.

Dalina was a former chief of the Fords Fire Co., past president of the Woodbridge Township Youth Association, and had been a member of the executive board of St. Joseph High School in Metuchen for eight years.

“Pete was a generous, enthusiastic public servant who for 50 years gave of himself to make the lives of the people of Woodbridge and of Middlesex County better,” he said.

Rios said his colleague and friend was an incredible athlete and an avid sports fan, and was the driving force behind the expansion of the county parks system. He said Dalina worked to bring about the level playing field at Roosevelt Park in Edison, the first barrier-free sports field of its kind in the nation. The county also built its skating rink, cricket pitches and artificial-turf athletic fields, and incorporated modern park-design elements and materials to better serve park-goers during Dalina’s tenure.

In June, Fords Park in Woodbridge was dedicated as the Stephen J. “Pete” Dalina Sports Complex. Dalina was on hand for the dedication, and was presented with a ceremonial plaque commemorating the occasion and his 50 years of public service.

Richard Dalina said the park dedication was a proud moment for his father.

Rios ordered flags at all county buildings to be flown at half-staff following Dalina’s passing.

Dalina is survived by his wife Eleanor and sons Gary, John, Richard and Stephen and their families, which include three grandsons and three granddaughters.

Visiting hours were held Oct. 7 and 8 at Flynn and Son Funeral Home in Fords, and a funeral Mass was set for Oct. 9 at Our Lady of Peach Church in Fords.

In lieu of flowers, the family asked that contributions be made to the Our Lady of Peace Endowment Fund, 26 Maple Ave., Fords, NJ 08863.