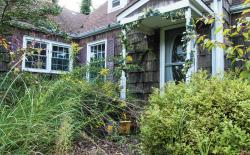 Many area municipalities have struggled to fill a tax gap brought about by abandoned homes while also allocating resources to maintain the properties. PHOTOS BY MATT DENTON I n what has been dubbed a “perfect financial storm,” many local towns are experiencing a negative impact caused by abandoned and vacant properties.

Municipalities have lost tax revenue as homeowners walked away from their properties during the economic downturn, and although the real estate market is on the mend, local officials are still struggling to fill the tax gap. The neglected homes can also become eyesores in neighborhoods, and many towns perform the property maintenance themselves to lessen the impact on surrounding homes.

“Ten or 11 [vacant] homes is a substantial amount of money in a small municipality,” Matawan Mayor Paul Buccellato said. Coupled with vacant commercial buildings in the borough, the tax burden on the residents is even higher, he said. For Matawan, the problem started at the height of the recession, and has been worsening ever since, he said. 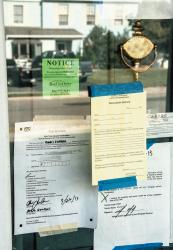 “It is people buying on the high end with mortgages that they came to realize were unaffordable. Therefore, they abandon the property, and the mortgage company takes over and lets it deteriorate … to the point where their value is going to decrease the values of the properties around them,” Buccellato said.

Banks assume responsibility for paying taxes on foreclosed properties, but most of the time the payments are delayed, according to Matawan Deputy Tax Collector Cathy Fitzgerald.

“The owner will let us know if they have been foreclosed on, but the bank doesn’t always let us know. Usually, we don’t get any notification for quite a while,” she said, adding that this causes a delay in payments. 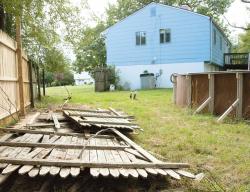 As the number of vacant and abandoned homes has increased in recent years, some local governing bodies have enacted laws to address issues with property maintenance. PHOTOS BY MATT DENTON Homes that are abandoned bring the biggest impact on the town, Fitzgerald said.

Greg Bonin, New Jersey Municipal Management Association (NJMMA) vice president, said the financial impact on municipalities is multilayered and can have consequences on the budget and the services provided to residents.

“The issue for any town is that when you have such a ratable loss … combine that with the 2 percent tax-increase cap per year and payroll increases for the township employees — it makes the [financial situation] really difficult for municipalities,” Bonin said.

“The cost of running a municipality doesn’t go down, [but with the loss of tax revenue] something has to give. Usually it’s services provided to the public.”

There is also a financial impact when the municipality is forced to step in and maintain the property.

“It’s a cyclical problem,” said Ed Purcell, staff attorney for the New Jersey League of Municipalities. “The banks aren’t doing upkeep on the properties and it impacts the municipalities financially. Some areas are worse than others, but it’s pretty bad across the board.”

North Brunswick Director of Community Development Michael Hritz said the problem with vacant homes in the township has improved as the market has stabilized.

“At the height of the recession, we would receive notification for as many as 50 or 60 properties a month that had been identified as accelerated foreclosures,” he said.

Though North Brunswick is dealing with only about a dozen abandoned homes at the moment, Hritz said they are still a burden on the township, because they divert labor and resources from other projects.

“We have nearly 10,000 residential properties in town, and the number of abandoned homes, on average, has been a dozen. … We are using municipal resources to go in and maintain the grass and lawn, and then placing liens on the properties to make up for the cost.”

In Old Bridge, officials try to keep ahead of the problem by budgeting $30,000 a year for an outside contractor to maintain such properties. The township paid $28,345 in 2011 and $24,858 in 2012 for maintenance on vacant properties, according to Old Bridge Business Administrator Christopher Marion. So far this year, maintenance has totaled $23,974.

While the numbers may be decreasing, the contract doesn’t include work done by the township Department of Public Works, Marion said.

“Property maintenance is definitely a concern, definitely a quality-of-life issue. Every town has to really have their resources to address it,” he said.

“We try to address them in a timely manner, and we try to be fair to the property owner and the neighborhood, but it needs to be addressed.”

While abandoned properties can also bring problems with trespassing, vandalism and theft, police departments in central New Jersey have reported a decline in calls about such activity.

“In the past, when the price was really high, people were trying to take the copper piping out of the house,” Metuchen police Sgt. David Liantonio said. “However, we haven’t had a problem in a while. The only time we are on call there is if a neighbor sees something.”

Howell police Detective Sgt. Eileen Dodd said trespassers are sometimes caught “hanging out” in the vacant homes, but there have been “very few” instances.

Purcell said the state has been trying to take care of the issue through the Save New Jersey Homes Act of 2008, which forces banks to notify towns about vacant properties so liens can be placed to offset costs the municipalities accrue through maintenance.

Many local governing bodies also try to tackle the issue by enacting new laws. In August, the Howell Township Council adopted a pair of ordinances that allow officials to keep track of vacant properties and to cite the responsible owners for code violations, without having to reissue the citations based on changes in ownership.

Mayor Bill Gotto said there were about 200 vacant homes in Howell that were a problem at the time.

“The ordinances have been helping,” Gotto said. “Banks, overall, have been responding better. We’re seeing more [financial institutions] doing better jobs of hiring contractors and doing upkeep and inspection work, and the ones that aren’t responding, we’re filing summonses against to require them to be a part of what we’re trying to do.”

Gotto said vacant properties became a problem between 2009 and 2011, when residents started walking away from homes.

“We had an exponential amount of abandoned homes in a short period of time, and it took us a while to understand the magnitude of the situation,” he said.

Matawan has also tried to address the issue with an ordinance that establishes standards of accountability for the owners or other responsible parties of vacant and abandoned properties. The ordinance requires a homeowner who plans to vacate a structure to register the property, pay a deposit of $500 and provide the names of the owner and the person who is responsible for maintaining the property.

Registration would be for one year and owners would be required to renew the registration at a cost of $1,000 for the first renewal; $1,500 for the second; and $2,000 for subsequent renewals. An owner who does not comply with the ordinance is subject to a fine of between $200 and $1,000 for each offense.

Buccellato said Matawan had a general maintenance ordinance in place, but if a property fell into disrepair, trying to find the responsible party was a nuisance. The new ordinance provides the borough with more information on finding people who own vacant properties.

“This is going to address the cost to the residents,” Buccellato said.

The regulations imposed in Matawan could soon be statewide, with the passage of a bill pending in the state Legislature. The bill, A4031/S2921, would require registration of certain vacant and abandoned properties with municipalities for a first-time fee of $250 and a renewal fee of $500. It would also provide enforcement tools related to maintenance of the properties.

With the bill still pending, some municipalities are holding off on enacting local legislation governing vacant properties.

“We have an existing property maintenance ordinance that we have been able to utilize,” Hritz said regarding North Brunswick.

“The council has considered an ordinance specifically regarding vacant and abandoned buildings, but the bill would trump local legislation. We decided to pause while that bill makes its way through the State House,” he said.

Manalapan does not have a database of abandoned properties, but uses records of homeowners’ names and the banks that own the properties via notices of intent from the township. Manalapan Mayor Susan Cohen said the township usually contacts the financial institution that owns a given property three times before the municipality steps in.

“Unfortunately, that puts a little bit of a burden on the taxpayers because it might be years before they see the money again, but we try to keep the town beautiful,” she said. “Our residents deserve to live on a street that’s well kept.”