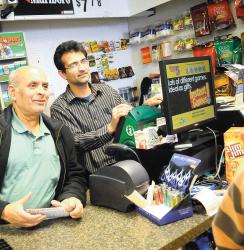 Dhiren Desai (l) and Vikram Chaudhari sell lottery tickets at the Esquire News & Smoke Shop, Freehold, on April 3. Many small-business owners are concerned that privatization of the lottery would have a negative impact on business. ERIC SUCAR staff Like so many mom-and-pop shops around the state, Esquire News & Smoke Shop is an integral part of the downtown in which it is situated.

From early morning until the doors close at night, owner Vikram Chaudhari and his employees greet residents, area workers and other mostly familiar faces from Freehold Borough as they stop in for a newspaper, cigarettes, coffee or some other convenience — and, more often than not, a lottery ticket.

The 5 percent that Chaudhari receives from the state for his lottery sales represents only a tiny portion of his profits, and the 1 percent commission on jackpots amounts to even less. But that’s not really the point, he said. Offering the lottery is more about drawing in customers than about profits made from the state’s gambling enterprise.

“When they come in, they’ll buy something else,” he said. Some independent retailers that sell tickets feel threatened, however, by a plan introduced last year by Gov. Chris Christie that would turn over the lottery’s marketing and sales to a private company. Opponents argue that this would kill jobs and hurt small businesses.

“Now in New Jersey, the overwhelming amount of lottery sales tend to be at small [independent] stores,” said Seth Hahn, legislative and political director of Communications Workers of America (CWA) NJ, a telecommunications union that has voiced opposition to Christie’s proposal.

Lottery sales in small retail outlets trigger the sale of higher-profit items, such as coffee, soft drinks and sandwiches — sales that Hahn and others believe could diminish if the private company set to take over the lottery focuses on larger retailers and moves ticket sales to the Internet.

“We don’t call it a privatization,” said Bill Quinn, a spokesman for the state Department of the Treasury. “We call it a procurement process.”

Quinn said the move would not be a takeover of the entire lottery, but only a piece of it. Still, critics fear that it would put small retailers at the mercy of the private company in charge.

“There’s nothing in the governor’s proposal that would stop these private vendors from charging fees for using or maintaining lottery products,” Hahn said.

The state’s sole bidder in the solicitation process, initiated in August, was Northstar, a joint venture between GTECH, Scientific Games and the Ontario Municipal Employees Retirement System. The bid was for a 15-year contract that would begin with the company making a $120 million upfront payment to the state, an amount included in Christie’s 2013 budget.

“This is just a bad way to plug the hole in the budget,” state Assemblyman Patrick Diegnan (D-Middlesex) said.

Diegnan, along with other Democrats, sponsored a bill that would require legislative approval before privatization of the lottery could occur. Because the governor can use his veto power to strike down the bill, it is largely symbolic.

“I guess you can say it’s symbolic, but I still think it’s really important, because it’s one of these things that has gone under the radar,” he said. “This is just a bad deal all around for the state.”

Diegnan and other critics of the move say Christie and his administration have been hush-hush about plans to bring in the private company.

“We couldn’t even get the state treasurer to come before our committee and testify,” he said.

The relative silence on the issue isn’t the only sticking point. Diegnan said that if selling off a major part of the lottery to a private group cannot be stopped, additional bidders should be sought to make the process fairer.

“At the very least, that’s what should be done,” he said. “The whole process is flawed.”

Aside from the obvious boon of the upfront payout, it’s hard for some to figure out why the process is happening in the first place. The purpose, Quinn said, is to improve sales and possibly make other changes to the lottery.

“There’s a concern that younger people are not playing the lottery as much as older people are,” he said, adding that Northstar would operate under an incentive-based structure that would reward the company for increased lottery sales.

A study conducted by Macquarie, a statehired consultant, projects New Jersey’s total lottery revenue to decrease by 0.8 percent by 2016, and contributions from the lottery to the state to decrease by 1.1 percent in the same timeframe.

Although the study also speaks of a gradual decline among the most frequent players of the lottery, it also shows that 2011 yielded $930 million, which was the highest contribution to the state since 2006. And in 2012, according to the New Jersey Lottery’s website, it enjoyed record sales, grossing more than $2.7 billion and contributing more than $950 million to state coffers. It represents the state’s fourth-largest producer of revenue.

“It generates about a billion bucks a year, and revenue is growing. I really just think it’s ludicrous [to make changes to it],” Diegnan said.

The CWA points out that in Illinois, where Northstar entered into a similar deal, the company was expected to be a quarter-billion dollars short of projected revenue targets. According to a Chicago Tribune report, the company requested more than $230 million in concessions from the state of Illinois, but was later denied.

Quinn said New Jersey taxpayers would not be on the hook if revenue targets are not met.

“If they don’t meet those [goals], then they would be liable to the state of New Jersey for the shortfall,” he said.

Although opponents cite a range of issues with privatization, the one that may matter most to the average New Jerseyan is the potential loss of jobs.

The Asian American Retailers Association (AARA) estimates that 7,000 jobs would be lost in New Jersey if the lottery were privatized. However, Quinn questioned the validity of that claim, stating that the group’s study has not been publicly released. The AARA did not respond to requests for a copy of the study.

“More retail dollars are being spent at chain stores and bigger stores,” Quinn said, adding that it makes sense to try to optimize opportunities in those outlets. He noted that the plan, which remains preliminary, would not cast aside smaller retailers.

“Certainly, the lottery will want to maintain its base of independent convenience stores that have been with the lottery for a long time,” he said.

According to Hahn, 63 New Jersey Lottery workers, or nearly half of the staff, would be laid off if the contract is signed.

“[That] is years and years of experience,” he said. “If you’re thinking about building sales, you’d think you would keep those people.”

Whatever one’s stance on the issue, nothing is set in stone until the contract is officially inked. Quinn said there is no timeframe for when that may occur, other than “soon.”

Chaudhari said he thinks the move will have a negative impact on his store’s sales.

“This is a definite customer-generator at all small stores around the state,” Diegnan said. “It’s just not fair to all these owners. It’s simply not fair.”