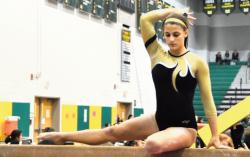 Freehold High School’s all-state gymnast Jennifer King will take her talents to the University of New Hampshire starting next fall. DORINE SHAPIRO Freehold High School’s Jennifer King has never shied away from a challenge. It made her one of the most decorated gymnasts in school and Freehold Regional High School District history. Now, the all-state Colonials senior is ready for her next test — Division I college gymnastics.

King, who led the Colonials to the 2011 NJSIAA Team Championship and back-toback Central Jersey state sectional crowns in 2011 and 2012, will be attending the University of New Hampshire, where she will be a walk-on to the women’s gymnastics team.

“I always knew I wanted to be a Division I athlete,” she continued. “I’ve been looking forward to competing at Division I all my life. I’ve worked hard for it.”

Being a walk-on doesn’t phase King in the least. She likes the idea that she has to “earn my spot.”

Location also played a role in King’s decision. Her family vacations in New Hampshire and now has a home in Tuftonboro, which is 45 minutes from the New Hampshire campus in Durham.

“I grew up here,” she said of the Granite State. “It (college decision) worked out perfectly.”

King had other colleges pursuing her, but after an official visit to the University of New Hampshire, it was over.

“I loved the campus,” she said. “I got to meet the team and coaches. I love the coaches. It’s where I felt I fit the most.

“I can’t wait to be on the team and experience what it’s like,” she added. Team has always been important to King, who invariably put the Colonials first above her own individual success. New Hampshire has a very good program, which should help her feel at home. Ex-Howell High School great Austyn Fobes, who was the NJSIAA state allaround champion, is in her senior year there and has qualified for the NCAA Regionals.

King is certainly ready for the next level. Competing for her club, Devlin Gymnastics in Manasquan, she recently finished fifth in the all-around (36.425) at the New Jersey Level 9 and Level 10 State Championships, qualifying for regional competition later this month.

King will major in physical therapy at New Hampshire. It’s a major she was driven to in no small part because of the injuries she had to overcome to become an all-state gymnast. There were times when her career may have been in doubt, but through sheer will and perseverance, she overcame them to fulfill her goal of competing at the Division I level. She knows she can use her experience to help other athletes going through what she did.

“I want to be around athletes,” she said. “I want to help them. When they’re injured, they need someone to pick them up.”

Who better to help them than someone who has been through it all before and competed at the highest level in high school and college?