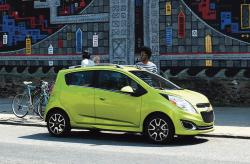 The average price of a new car is just over $30,000, according to industry sources. That kind of money buys a roomy, powerful and sophisticated midsize car with many of the latest high-tech features. But what’s out there for those on a far tighter budget and are willing to make do with merely minimalistic features?

Surprisingly, $12,185 gets a reasonably competent and capable ride in the form of the new-for-2013 Chevrolet Spark. Built in South Korea, it’s the latest “minicar” to be sold in the U.S. and it competes with the comparably priced Smart ForTwo and the costlier Fiat 500 and Scion iQ among entry-level and youthful urban buyers. Autos like these are popular in Europe and Asia where the roads are narrower, fuel prices are higher and vehicles are taxed according to their size. At an overall length of 144.7 inches, the four-door Spark hatchback is slightly larger than its competitors, though it’s still about four feet shorter than a midsize sedan, which allows it to wiggle its way into even the smallest parking spaces with ease. While not as Fashion Week chic as the Fiat 500, the Spark is neither as eccentriclooking as the Scion iQ or Smart ForTwo, with its tall and narrow angular-exterior styling dominated by Chevrolet’s signature split-front grille.

What the Spark possesses that none of its competitors can match, however, is a usable back seat that can accommodate two adult riders with a maximum 35.2 inches of rear legroom. That’s roughly on a par with the compact-class Chevy Cruze. Front seat room is adequate for taller riders, though not particularly generous. There’s only token cargo space behind the rear seatbacks, but when folded flat, the Spark can accommodate 31.2 cubic feet of gear.

Naturally, there are sacrifices to be made, given the Spark’s cost. For starters, its 1.2-liter 84-horsepower four-cylinder engine isn’t particularly quick, and it gets loud under what passes for heavy acceleration. It will eventually get up to highway speed, though its passing abilities are lacking. The standard five-speed manual transmission is recommended to wring the most power out of that tiny engine. Although the optional automatic only comes with four gears, it’s reasonably responsive. Fuel economy is a frugal 32/38-mpg city/highway with the manual and 29/37 with the automatic.

The Spark’s handling isn’t particularly sporty, but it can be playful darting through urban traffic and careening around corners, and stable enough on the highway. The ride is tuned on the soft side, though it tends to bounce over bumps and can get jittery over broken pavement.

The car’s interior is well-designed with high-quality plastics that give it an upscale look and feel. Our biggest quibble is the analog speedometer and LCD tachometer and trip computer pod that’s mounted atop the steering column, instead of into the dashboard where it would be more in a driver’s line of sight. Kudos to Chevy for not offering a stripped-down model for the sake of a lower advertised sticker price that consumers would never see at a dealership. Standard equipment includes air conditioning, power windows, the OnStar telematics system and no less than 10 airbags.

All versions but the base model get an audio array with a seven-inch color LCD touchscreen that can integrate smartphone apps into the system, including Pandora Internet radio and a navigation program that precludes having to purchase a costly GPS system. The tester, a top-of-the line 2LT version with the automatic transmission, came with amenities like keyless entry, heated front seats and a leatherwrapped steering wheel with audio and phone controls, yet still came in at a reasonable $15,970 (plus a $750 destination charge).

The Spark may not be for everyone, but it is inexpensive, seems solidly built and does have a certain charm, especially given its palette of hot exterior colors, including salsa, denim, lemonade and hot pink.