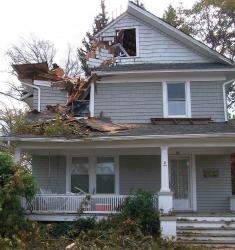 A house on Lincoln Place in Freehold Borough was damaged when Sandy delivered a devastating blow to New Jersey on Oct. 29. Photo taken Nov. 2. MARK ROSMAN FREEHOLD — The hum of gas-powered generators could be heard in the wee hours of the morning throughout Freehold Borough, painting an eerie, almost surreal picture in the town that has once again been hit hard by Mother Nature.

A storm that began life as Hurricane Sandy and was a post-tropical storm when it struck New Jersey on Oct. 29 caused significant damage in the borough and left the town without power for days.

As of Nov. 6, some 545 customers in Freehold Borough remained without power, according to Mayor Nolan Higgins.

It was the second time in three months that the borough absorbed a body blow from the weather. On July 28, a supercell thunderstorm ripped through town and caused multiple problems throughout the municipality.

Last week, Sandy pummeled Freehold Borough with high winds that knocked down trees and power lines. The entire town was dark in the wake of the storm. Fortunately, no lives were lost and no injuries related to the storm were reported, according to authorities.

Homes were without power, schools were closed, and businesses were shut down. Municipal offices were closed and residents were once again left to clear their property of debris.

Higgins said executives from Jersey Central Power & Light had warned him before the storm to expect the worst. He said municipal officials made sure supplies such as fuel for emergency vehicles were in place and he had all of the Freehold Fire Department’s members on stand-by.

Water in the borough was monitored during and after the storm and deemed safe to drink.

Borough Administrator Joseph Bellina said employees from the Department of Public Works began preparing for the storm on Oct. 27. The DPW cleared drains and removed brush and leaves from the streets in an effort to forestall any potential flooding problems.

Bellina said because Sandy did not bring significant rainfall to the borough, there was much less flooding than there was during the July 28 storm. The lack of heavy rainfall was a factor that worked in the town’s favor.

First Assistant Fire Chief Danny Megill said more than 80 emergency calls were answered in the wake of the storm.

Higgins and members of the Borough Council assessed the damage to the town on the morning of Oct. 30.

In the borough, Sandy’s high winds brought down trees on 10 homes, affecting three homes on Lincoln Place, one on Cottage Place, one on Club Place, one on Jerseyville Avenue, two on Murray Street, one on Oak Street, and one on Fulton Street.

The trees were cleared as quickly as possible from the homes, according to Higgins, who had prearranged with D&S Landscaping to be ready to remove downed trees.

No one had to be evacuated, according to the mayor.

As of Nov. 1, one of the biggest challenges facing officials was a lack of fuel for the borough’s emergency vehicles. Higgins said he was expecting the entire situation to improve once power came back on in the community.

The gas situation began to ease by the weekend of Nov. 3-4.

“We wanted to make sure we maintained a police presence at those locations from dusk until dawn,” Roberts said.

Police officers remained on patrol in other parts of the municipality.

“We had patrols riding around with emergency lights monitoring the town, especially for those who did not have any phones or contact with anyone,” the chief said. “Other patrols were answering calls and making sure that people who did not have power knew they could have access to the police if they needed us.”