John Byrne shows his enthusiasm after arriving in Freehold Borough following a cross-country bicycle ride. Byrne, a firefighting engineer for CAL FIRE, rode from the Golden Gate Bridge to the Brooklyn Bridge to help raise money to buy his quadriplegic sister an adaptive vehicle with a ramp and hand controls. PHOTOS BY ERIC SUCAR staff Family members show their love for one another in many ways. John Byrne of Nipomo, Calif., who has deep family ties to Freehold Borough, rode his bicycle 3,400 miles across the country to show his sister his love for her.

Byrne, 26, who is a firefighting engineer for CAL FIRE, pledged to help his sister, Lauren, 22, of Newark, Calif., become more independent. Lauren sustained a spinal injury seven years ago in a pool accident and has been confined to a wheelchair as a quadriplegic since that time.

After years of physical therapy, Lauren has movement in her arms and continues to improve. Her goal is to continue her education, majoring in early childhood development, and to become a teacher. 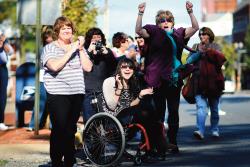 Lauren Byrne (c) waits to welcome her brother, John, to the Freehold Fire Department, Freehold Borough, during his bicycle ride from California to New York. Byrne’s goal in riding across the United States was to raise funds to purchase an adaptive vehicle with a ramp and hand controls so Lauren will not have to depend on other people for her transportation needs.

Byrne started his trip on Sept. 9 at the Golden Gate Bridge in northern California. Along the way he visited firehouses, where he was given lodging and a warm welcome by brother firefighters.

His trip ended at the Brooklyn Bridge in New York, but on his way to New York he made a stop in Freehold Borough. When Byrne arrived in town two weeks ago he reported that “Lauren’s Ride” had raised more than $50,000.

Byrne’s mother, Judy, was raised in Freehold Borough. Judy Byrne’s father, John Quigg, and her mother, Elsie, lived in the borough for 50 years.

John Quigg was a 30-year volunteer firefighter with the Freehold Fire Department and served as president. Judy’s sister, Sue Licari, lives on Union Avenue in the home in which she and Judy were raised.

Byrne was escorted into Freehold Borough on Oct. 13 by fire trucks and police vehicles. Family members, friends, Mayor Nolan Higgins and others gathered in front of the firehouse on West Main Street to greet the cross country cyclist.

Waiting with anticipation were Lauren and Judy, who flew in from California to greet Byrne.

Lauren was wheeled to the edge of the driveway by her mom and watched intently as the procession of vehicles moved down Main Street, trying to get her first glimpse of the brother she had not seen for more than a month.

“I’ve missed him so much,” Lauren said with emotion.

Freehold firefighters were on hand to welcome Byrne to their firehouse.

Higgins said, “The moment when John arrived and met his sister was remarkable. The emotion and sense of accomplishment were palpable. It was an honor for the borough community to be part of this celebration. John Quigg served the fire department with honor and to have his family and our members gather on this eventful day was very special for the borough and the fire department.”

Byrne said his sister “is the most positive uplifting person I know” and said he was making the effort in order to help her have a more independent life.

He thanked the firefighters and the other “unbelievable” people he met along the way who supported his effort.

Byrne thanked his fellow CAL FIRE firefighter from San Diego, Tony Hernandez, who heard about the trip and was so moved by what Byrne was doing that he contacted Byrne and offered to follow him in an SUV. The SUV contained first aid supplies, food, spare bicycle tires and other necessities.

Freehold firefighter Mike Crawford, a 23-year veteran of the department, was contacted by Byrne in June with a request for assistance. Crawford said he and Byrne’s mother grew up next door to one another in the borough. Crawford was happy to welcome Byrne to the Freehold firehouse and a dinner reception was held in his honor on Oct. 13.

Crawford thanked Engine No. 1, Engine No. 2, Monmouth Hose Company, Richard Gatto, the CEO of Downtown Freehold, Rob Kash, the owner of the Metropolitan Café, Higgins and the Borough Council for their support and donations for the dinner reception.

“It was a once-in-a-lifetime thing,” Crawford said. “It’s nice to give back. Firefighters really are a brotherhood. We have no boundaries. It doesn’t matter if you are in the next town or across the country, firefighters are always willing to help one another.”

Crawford said Byrne was presented with photographs of his grandfather in what was an emotional moment for the cyclist.

“It was a very emotional experience to see that the truck he rode on as a firefighter was the same truck he was carried on to his gravesite by his fellow firefighters,” Byrne said.