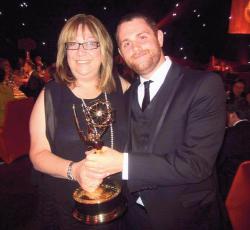 Old Bridge High School graduate Adam Chazen shares his Emmy award with his mom, Michele. A dam Chazen has an eye for the unusual. That is why the Old Bridge, Middlesex County, native was handed the Outstanding Special Visual Effects award at the 2012 Creative Arts Emmys for his work on HBO’s “Game of Thrones.”

“It was incredible,” Chazen said of the Sept. 15 event held at the Nokia Theater in Los Angeles. The Emmy was presented to him for his work on “Valar Morghulis,” the second season finale of the medieval fantasy show.

Chazen said his heart was racing fast while he was waiting for the Emmy envelope to be opened.

“We were waiting for a long time and then finally your category is called, and then it all becomes a big blur,” he said.

Chazen, 26, graduated from Old Bridge High School in 2004. He began his career by videotaping PTA meetings and high school events.

“He went about everything in a very strategic way,” said Bierman.

After graduating from college, Chazen quickly advanced in the industry and he worked on many major motion pictures, including “Transformers,” “Yogi Bear,” “Iron Man 2,” “2012” and “Being Elmo.” “It’s been great. I am doing what I love, and at the end of the day that is all I can ask for,” said Chazen.

When there is stress during a scene, Chazen said he looks forward to the finished product to get him through the day.

“When you see the finished product in the theater or on the television, it is worth it. And then to hear that other people enjoy it is a big high,” he said.

Chazen, who is now a resident of Belfast, Ireland, said he enjoys living overseas with some of the nicest people he has ever met.

“It is certainly different. It has become another home to me,” he said, noting that he has lived in the region during the last three seasons of “Game of Thrones.”

Belfast “has become more vibrant over the years. It is a fun town, and they are doing more and more,” he said.

His mother, Michele Chazen, said she cannot believe her son actually won an Emmy and that she was present for the ceremony in Los Angeles.

“It was surreal, it was definitely surreal. I am still on cloud nine,” she said.

Michele said Adam began showing an interest in film while he was in middle school and has grown into it ever since.

“To be able to watch him grow and accomplish so much at 26 years old is amazing,” she said.

No matter where he lives, Chazen’s talents are noteworthy as he climbs the ladder of success on the film scene.

“He’s definitely a rising star. He’s very talented,” Bierman said. “He has a very strong work ethic and he is one of the nicest guys you’ll ever meet.”