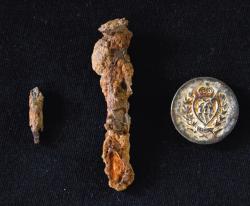 Two nails and a 19th-century button were recovered during the metal detector survey at Piscatawaytown. EDISON— Three artifacts discovered in the township’s oldest neighborhood are believed to date back to the Colonial era.

The two wrought iron nails and a button were found during metal detector searches of the 7.5-acre area of the Piscatawaytown burial grounds and the adjacent Commons on Woodbridge Avenue. The Battlefield Restoration and Archaeological Volunteer Organization, Freehold, conducted the two-day effort.

The items were located off Woodbridge Avenue, along the stretch that is in front of the St. James Church. In all, 24 artifacts were recovered during the searches in May. The search area ran west to east from Germantown Avenue to Park Way.

Trolley spikes were among the items found. Researchers noted that a trolley once traveled along Woodbridge Avenue on a route between Newark and New Brunswick.

The Metuchen-Edison Historical Society received a $2,150 matching grant from the Middlesex County Cultural and Heritage Commission and the Board of Chosen Freeholders to conduct the research. The funds originated with the New Jersey Historical Commission.

Last year, the historical society received a $31,000 grant from the American Battlefield Protection Program to prepare a National Registry of Historic Places nomination for the Short Hills Battlefield. Experts from the John Milner Associates Inc. of West Chester, Pa., came to the area to look for artifacts from the battle. The society mapped about 5 acres where they believed the battle was fought. It is believed to have taken place in an area that is now home to the Plainfield Country Club on Woodland Avenue. Items found included a musket ball, brass buckles, a British coin, a Hessian button and a scabbard, which is a leather piece for holding a sword.

Stochel and Gall said very few items were found because up to 2 feet of fill was placed on the western side of the Commons where the Rendell Brook once ran. Other areas were filled in or otherwise disturbed during the building of ballfields and playgrounds at Swales Park.

Alarge paved parking lot that runs between the park and the church could not be investigated. Also, over the past 300 years, artifacts could have been found and taken by unknown parties.

Piscatawatown and the Commons were founded in 1666 as the original settlement of Piscataway. The Commons is still public land and is one of the few remaining commons areas in the state. The location was part of Piscataway Township until 1870, when it became part of Raritan Township. In 1954, the area became part of Edison.

The Commons in Piscataway started to decline after a tornado destroyed the village in 1835. The town meeting moved to New Market that year. The Middlesex-

Essex Turnpike was built, which became a more direct route between cities and the railroad in Metuchen began to grow. Before the development of the Middlesex-

Essex Turnpike, the Post Road, now Middlesex Avenue, was the main road of the colonies, with people traveling between Boston and Philadelphia.

Stochel said the group was hoping the search would yield artifacts from the Colonial era and the Revolutionary War. ABritish camp occupied the area from December 1776 to June 1777. The church was used as an infirmary for the sick and wounded. The site was where the Colonials attacked the British. During the attacks, several hundred men were killed and some were buried on the grounds of the church.

“It was not a happy time for the Commons,” Gall said.

The Commons included stocks, a pound and an armory, a burial ground, a church, a town house where town meetings were held until 1835, a school and inns.

The Old Piscatawaytown schoolhouse was built in

1892 and became the Raritan Township Municipal

Building and later a recreation office. It burned down in the 1980s. The cause of the fire was believed to be arson.

The county seat offices for Middlesex and Somerset counties were also located at the Commons.

Local historians said they hope to preserve the area and create a recreation of the Commons area.