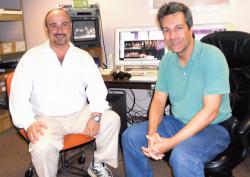 Ed Cologna (l) and Michael D’Amato are the men behind Edison TV. EDISON — Twenty years ago, Ed Cologna walked into the small television studio that occupied a small space at the township’s police station.

It was September 1991, and Edison officials were thinking about creating a television station for the township.

“I was brought in to help the township with technology, and it ballooned into creating a television station,” he said.

Cologna said that at first he was pretty much a “one-man band,” creating training videos for the police and fire departments.

“This was at a time when public stations were being formed in Piscataway, East Brunswick, Woodbridge andMetuchen,” he said .

Then, in 1994, with Mayor George Spadoro’s vision, the township sent its tapes to TKR Cable and began airing a segment called “Focus on Edison” as well as Township Council meetings and specials.

Michael D’Amato, now the station manager, was not working at the station at the time but was living in the Durham Woods apartment complex.

In 1996 the township entered into a contract with Cablevision that allowed it to create a multitude of programs on its own public access Channel 15. The station is now located on the second floor of Town Hall.

“We were covering programs that no other [media outlets] bothered covering,” said Cologna.

D’Amato said the station focuses on meetings and events in town, including festivals, charity events such as 5K runs and carnivals, and concerts. This month it covered the Sept. 11 memorial service, and it will cover the Edison Arts Society’s gallery reception and the POW/MIA programs in town.

D’Amato said he and Cologna are big on covering local arts and had previously held segments called “Arts in Edison,” “Read Across Town” with children’s librarians, and “New Jersey on Stage.”

“We aired 93 episodes [of ‘New Jersey on Stage’] and they were picked up by towns all over the state,” said D’Amato.

The Edison TV station has had as many as five employees, three of whom were part-timers. The employees included George “Red” Ellis, who worked full time with the station for 15 years until being laid off earlier this year.

Cologna said Ellis was with the station from the very beginning.

“He was volunteering with the Metuchen station and came to our station in 1996,” he said.

Now, due to the economy, Cologna and

D’Amato are the sole employees.

“Of course, we don’t make it to everything, but we do the best we can,” D’Amato said. “There are a lot of weekends and nights … it’s essentially a 24 [-hour], seven [-day-a-week] operation. We have remote access at home where we can update the bulletin board, which I did from my home in Freehold during the recent hurricane until my power went out.”

Cologna said his job at Edison

TV is a labor of love.

“It’s a nice working environment and you get to cover a variety of things,” he said. “There are certain freedoms that you might not get at a big [corporation] like CBS. We air uncensored meetings; these are important to the residents.”

Cologna said the No. 1 priority is getting information out to the residents and informing them of what is going on.

Edison TV, for two years in a row in 2007 and 2008, was named the top station for exclusive government coverage with a budget under $200,000. The station presents 180-plus programs and 80-plus meetings over the course of the year. Programming is run from 8 a.m. to 11 p.m., and in the early morning hours the bulletin board is displayed.

D’Amato and Cologna said that with the administration’s push, they are moving toward providing more programming on the township’s website, www.edisonnj.org, such as the weekly “Mayor’s Corner” segment where Mayor Antonia Ricigliano discusses a variety of topics.

“We hope by the end of the year that we can have council meetings on demand,” said D’Amato, who noted that residents with satellite do not receive the public access channel. “We hope to provide access to everybody.”