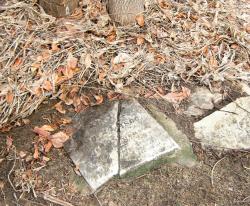 A splintered tombstone marks a grave at Locust Grove Cemetery in Eatontown where Samuel ‘Mingo Jack’ Johnson is believed to be buried. On March 5, 1886, a riotous crowd gathered outside the Eatontown lockup, located at what is now the borough’s Wampum Park.

According to historian and author James Stone, the crowd, made up of local white men, was out for the blood of a man held inside the 8- by-4-foot jail.

Samuel “Mingo Jack” Johnson, an African American and former slave, was locked up in the building, accused of raping Angeline Herbert, a white woman, earlier in the day. That night would prove to be the last of Johnson’s life.

Since his death, it has become accepted belief that Johnson was wrongfully accused of the rape and was, in fact, a victim himself, Stone said in an interview last week.

In order to mark the event and pay their respects to Johnson, on March 5 at the Eatontown Community Center, the Eatontown Historical Committee and the Mingo Jack Remembrance Group will host a community discussion about the lynching.

Members of the groups are seeking to construct a monument memorializing Johnson’s death.

TheMarch 5 gathering is expected to include area residents whose family members lived in the borough during the time of the lynching, as well as Stone, the author of “The Murder of Mingo Jack” and a former Tinton Falls resident.

On Feb. 25, Stone met with members of the Mount Zion African Methodist Episcopal Zion Church located on South Street in the borough to help flesh out the events of the lynching and provide insight into the state of the borough during that time.

A former employee at Fort Monmouth who moved to Maryland with the Army’s mission, Stone said he wrote his book in order to bring the events of the lynching to light.

“I was just reading an ‘Images of America’ book and I saw a picture of the lockup, and there was a brief description of Mingo Jack and how he allegedly assaulted [Herbert] and how he might not have been guilty,” Stone explained.

“And I researched it, and the more I did research about it, the more I thought maybe this could be turned into a book.

“It was something that nobody had really looked into.

The book, which was published this year, took Stone roughly a year and a half to research and another six months to write.

In it, Stone explores Johnson’s life prior to the events of 1886 as well as his murder and the repercussions on the area.

Born in Colts Neck in 1820, Johnson was abandoned by his parents and raised by a white DAN HOWLEY family, the Lairds. The Lairds used Johnson as a slave, and because of his size — he was short and stocky — as a jockey.

Johnson rode a horse named Chief Mingo to victory during one particular race, and from that day forward, he was referred to as Mingo Jack, Stone explained.

Around 1840, when slavery was abolished in New Jersey, Johnson left the Lairds and began working odd jobs around Middletown and Eatontown.

As time passed, he met and married his wife Lucy and had five children.

In 1886, Johnson was living in Eatontown just south of present-day Route 35 on Poplar Road, Stone said.

At the time, Johnson, who was in his late 60s, lived in a small wooden cabin and cared for his then-bedridden wife. Most of his children were grown and had moved on.

Angeline Herbert, the woman who accused Johnson of raping her, lived just south of Johnson.

Herbert, who was in her mid-20s and suffered from tuberculosis, only saw Johnson while he was working on his property, Stone explained.

On the day of the rape, Herbert went for a walk to return a tin baking dish to another neighbor. The route to the neighbor’s house took Herbert down a desolate road that separated her property from Johnson’s.

While walking down the deserted road, Herbert was accosted by a man, beaten and raped, Stone said. Herbert claimed it was Johnson who attacked her, and he was promptly arrested and brought to the lockup building.

Word of the attack spread quickly, and a crowd began to gather outside the lockup.

Seeking revenge for the attack, the mob began chiseling holes in the side of the building. Members of the group then stuck rifles into the holes in an attempt to kill Johnson.

When their guns couldn’t do the job, the crowd broke down the door to the tiny jail cell, dragged Johnson out, beat him to death and lynched him.

According to Stone, an investigation into the rape revealed that Herbert’s description of the clothes the attacker was wearing did not match those worn by Johnson that day.

“[That] kind of cast doubt that he had really been the person that had assaulted her,” Stone said.

Further complicating matters was Herbert’s claim that her attacker asked her if she knew Mingo Jack during the course of the assault.

“It was almost like when the attacker said, ‘Do you know Mingo Jack?’ it planted a seed in her mind that it was Mingo Jack, because she had never seen Mingo Jack up close, either. She had only seen him out her window, which was about 50 yards from where she lived.

“A lot of evidence points to that he didn’t do it,” Stone said.

An inquest into the lynching was a fruitless endeavor that was more of a social gathering than an investigation.

A trial held on the matter saw several members of the jury intoxicated, Stone said, and defendants also testified while drunk.

Although the crime was never solved, Stone said there were several suspects who are believed to have been involved in the lynching.

“There were a few men that came forward,” Stone said. “During the inquest, they were put on the stand, and a lot of what they said didn’t make sense.

“They had been hanging out in a bar in Eatontown, and they talked about there being a rope that they were going to use to lynch Mingo Jack,” Stone explained.

“Their stories didn’t quite add up, so a lot of people think they did it.

“They were actually arrested, too, but the charges were eventually dropped.”

Further clouding the case was the fact that several men came forward to confess their guilt in the rape of Herbert.

“The case is still unsolved, who actually committed the lynching of Mingo Jack and who actually assaulted Angeline Herbert,” Stone explained.

After his death, Johnson was laid out at Mount Zion A.M.E. Zion Church and was buried at the Locust Grove Cemetery off South Street in the borough.

Over time, the remains of several people buried at the cemetery were relocated to a different site, but it is not known if Johnson was among those.

The location of his final resting place is, like much of the events surrounding his death, still a mystery.