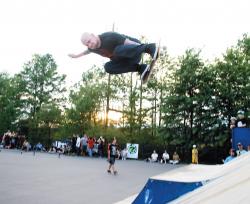 Professional skateboarder Mike Vallely flies high at the Edison Skateboard Park on Aug. 2. “Mike V.” made a pit stop in his hometown during his Glory Bound Skatepark Tour. PHOTO COURTESTY OF MIKE SCHWARTZ EDISON — After about a dozen times attempting a 360-degree knee flip-and-grab trick on his skateboard, Mike Vallely, a professional skateboarder and township native, threw his hands up.

“Nothing is ever perfect in this sport,” he said with a smile at the Edison Skate Park on Aug. 2. “You just really have to go for it.”

Vallely, 40, commonly called “Mike V.” in the skating world, prides himself on being a self-motivator and is not one to give up. But he did not have time to keep trying the trick all night.

“I’ve done it before, but anyone can tell you it is not easy,” he said. “You have to keep trying.”

Vallely’s hometown was the 13th of 24 stops on the inaugural Glory Bound Skatepark Tour. The tour kicked off July 18 in Mesa, Ariz., and will end at the Skate Lab in Simi Vallely, Calif., on Aug. 18.

Many people who came to the Aug. 2 event brought their skateboards and BMX bikes.

It was five years ago when Vallely started talking with an old friend, Mike Schwartz, who is an Edison police officer and former Police Benevolent Association Local 75 president, about holding a skateboarding demonstration in the area for local kids.

“And he has come back every year except for one year,” said Schwartz, who grew up with Vallely. “This is all for the kids.”

The PBA has sponsored the event every year.

In front of a crowd of skateboarding enthusiasts, the 40-year-old Mike V., who has been on the professional circuit since he was 17, put on a show with fellow professional skaters Duane Peters, Bill Danforth, Kristian Svitak, Ben Raybourn and Cyril Jackson.

Vallely said the tour presents “a unique mix of skate competition, entertainment, and fan participation, like no other event of its kind.”

“I was treading water after I broke my leg [about five years ago],” he said. “This is the first national tour that I am doing since then. I’m totally energized and intensified. I’m alive.”

Adam McClain, 15, Michael Veltz, 11, and Keon Garnes, 10, all from Irvington, came to the Edison Skate Park for the first time after learning on the Internet that Mike V. would be making a stop there.

“Even though the new school is in, the people from the old school are the best,” Adam said.

Michael Fusaro, 16, of Piscataway, found it “awesome” that Mike V. would be showing off his tricks and talent in Edison.

After the show, Vallely, who is also a musician, actor and stuntman, spent time signing autographs and having his picture taken with fans.