It’s often said that the difference between a win and a loss can be measured in inches. Joe Quaglieri knows this firsthand. 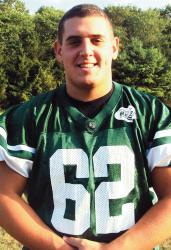 East Brunswick football captain Joe Quaglieri is looking forward to the upcoming season. The Bears will be the defending NJSIAA Central Jersey Group IV champions. The senior offensive and defensive lineman for the East Brunswick High School football team stands at 6 feet 1 inch and weighs 260 pounds. His height, or lack of, is considered a shortcoming for being a Division 1-A recruit. Unless Quaglieri spends the rest of the summer on a stretching machine, the likelihood he grows won’t happen.

“I could be upset about how [D-1 recruiters] feel about what I could do on that level,” said the Bears’ tri-captain. “But I’ve decided not to dwell on it. Besides, I’ve received a lot of attention from all the Ivy League schools and some quality I-AA programs like Villanova, Delaware and Monmouth.”

Quaglieri initially drew the attention of coaches at Princeton and Penn during a series of eye-opening strength and agility performances at their camps, and ranks those schools among his top preference … if he can qualify academically.

“My SAT scores are border line,” he said. “I have the grades. I need to score a little higher on the SATs when I take them again.”

Quaglieri has already made the grade on the football field. His play during East Brunswick’s march to the NJSIAA Central Jersey Group IV championship was crucial as a lineman on both sides of the ball. He knows, however, his future playing college football will be on defense, specifically as a nose guard.

“That’s my position,” he says. “I love playing in the trenches and nose guard allows me to take advantage of my strengths.”

Quaglieri’s power off the ball is what coaches look for at nose guard. He possesses unusual lower body strength to gain leverage to take on opposing linemen. His other asset is balance.

“One of our conditioning exercises involves developing hip movement,” Quaglieri said. “That enables me to stay on my feet and take on blockers. That caught the attention of coaches who watched me at camps.”

In addition to conditioning and lifting workouts conducted at the high school, Quaglieri has been working with Val Barnaby, a member of the Parisi Speed School staff. Barnaby was a lineman for Rutgers who is helping other East Brunswick linemen prepare for the upcoming season.

“Even when he arrived as a freshman,” said his coach, Marcus Borden, “it was obvious he could play with the varsity, and that hasn’t happened too many times here. He not only knocked down opponents but searched for the next guy to block. You can’t teach those instincts.”

Now fast-forward to this fall, which will be important to Quaglieri for a variety of reasons. Not only can he improve his chances for a scholarship but relishes the opportunity to lead the Bears as they seek to defend their state sectional title.

“We have the opportunity to legitimize what we did last season,” he said. “We know we’re going to be targets because of the championship and we need to stick together more than ever. It’s an experience I look forward to.”

Quaglieri will certainly have a dedicated cast of supporters when he takes the field, beginning with his sister, Amanda, one of the team managers. His parents, Maurice and Linda, are two of his biggest fans and so is older brother, Vinnie, who graduated from Rutgers.

“While I wasn’t able to play until eighth grade because of the weight issue,” said Quaglieri, “I grew up around the game. Vinnie played before me and has been a great influence.”

“When I think of all the attributes I look for in a captain,” he said, “I see Joe. He’s a natural born leader who excels on and off the field. You can tell how passionate he is about this upcoming season by the amount of work he’s put into improving his strength. He’s at the top of the charts on the team for bench press, squat and clean and jerk.

“Beyond his physical ability,” Borden continued, “Joe has the drive to be a winner. He knows he’s being questioned about whether or not he can play major college football and that’s given him a lot of incentive. After all, you can’t measure heart.”