With the sting of a one-point loss to High Point 15 days ago still fresh on its mind, the Long Branch High School wrestling team entered the Shore Conference Tournament’s final four looking for redemption. And that is exactly what the Green Wave found Saturday after beating the host team, Southern Regional, and eventually Jackson Memorial, 29-23, to win its third straight Shore Conference Tournament (SCT) title. 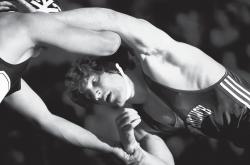 Above: Long Branch High School’s Billy George (r) tries to put a move on Southern Regional’s Kevin Westburg during their 185-pound bout at the Shore Conference Tournament held at Southern Regional High School, Manahawkin, Jan. 30. Left: Long Branch’s Jake George tries to break out of the hold of Southern’s Steve Johns during their 145-pound bout. PHOTOS BY ERIC SUCAR staff With the title, Long Branch became the first Monmouth County team to win three consecutive SCT titles, and the fourth team in the 34-year history of the tournament to win three in a row. The Wave also kept alive hopes of finishing the year as the top-ranked team in the state once again. 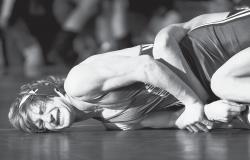 The two SCT semifinal match-ups were mismatches. Jackson took care of third-seeded and undefeated Howell, 33-18, winning nine of the 14 bouts, while Long Branch was equally impressive in its match with Southern, also winning nine of the 14 bouts en route to a 38-19 victory. That set up the highly anticipated final between two teams that are among the very elite programs in the state.

The championship match started at 189 pounds, where Long Branch’s Paul Tracy won a tough 2-1 match to give the Wave an early edge. Junior Billy George then major decisioned Drew Murphy, 13-4, in the 215-pound bout before Jackson heavyweight Joe Nolan got the Jaguars on the board with a 4-0 win over Jim Parnell.

The next three bouts were important for the Wave. Jackson entered the match with an obvious edge in the lower weights, meaning Long Branch would need to minimize the damage in these bouts as much as possible. As expected, Luke Balina, Thomas Ging and Nick George all lost their bouts at 103, 112 and 119 pounds, respectively, however, all three managed to avoid being pinned. Those saved points put Long Branch in the driver’s seat down the stretch, as their dominance in the middleweights became the difference in the match.

With the Wave well within striking distance at 125 pounds, Andrew Cornell got things going for Long Branch once again, posting a 13-4 major decision win over Brad Royle. Jackson’s B.J. Young then beat Matt Eggie, 12-3, at 130 pounds, but it was all Long Branch from there, as the Wave won four of the next five bouts to seal up the title.

After the Wave’s Luis Felipe beat Randy Royle, 7-5, at 135 pounds, Scott Festejo knocked off Devin Biscaha, 5-3, at 140 pounds, pulling off a five-point move in the final 20 seconds to win what everyone expected to be on the key bouts of the match. With Biscaha, the Region VI fourth-place finisher at 152 pounds last season, riding Festejo out for almost the entire third period, the Wave grappler then reversed Biscaha with 30 seconds left and put him on his back, much to the delight of his teammates.

Jackson’s James Kelly posted a 10-1 win over Jacob George at 145 pounds to set up the other key bout of the night, as Long Branch’s Doug Cornell took on Jackson’s Doug Hamann at 152 pounds. Hamann entered the bout at less than 100 percent, as he was still feeling the affects of a recent bout with mononucleosis. Cornell, meanwhile, was still dealing with the disappointment of a tough 3-1 loss to High Point’s Joe Gaccione, which helped seal the Wave’s fate in the match-up of the state’s top two teams. It made for a very dramatic moment in the midst of a contentious championship event.

This time, Cornell came up big for this team, scoring a key reversal in the second period and then recording the go-ahead takedown with 20 seconds left to win the bout, 4-3. Nick Visicaro, the defending state champion at 160 pounds, then followed with a pin of Jonathan Gaboff, and Omar Akel, the sixth-place finisher at 160 pounds last year, handed Jackson’s Dallas Winston his first loss of the year, 8-1, to close out the match.

With the SCT title now under wraps, the Green Wave will now turn its attention to defending its State Group II title. That tournament is scheduled to get under way on Feb. 8. Long Branch is the to seed in Central Jersey Group II.

On Sunday, a trio of Long Branch’s finest grapplers made the trip down to Brick Memorial to participate in the 10th annual All-Star Invitational. And while all three suffered defeats, their matches will only help them once the state’s individual tournament gets under way.

Billy George took part in the one of the most anticipated bout, facing Bound Brook’s Andrew Campolattano, while Visicaro bumped up to 171 pounds to face top-ranked Ryan Callahan of Wallkill Valley. Festejo, meanwhile, was part of the event’s most exciting match-up, losing an 11-9 bout to James Green of Willingboro.

Festejo, the state’s third-ranked grappler at 130 pounds, fell behind early to Green, ranked No. 3 at 140 pounds, as Green scored on a pair of takedowns and two near-fall points to grab a 6-2 lead through two periods. His lead ballooned to 9-2 midway through the third, but Festejo showed some grit in escaping and executing a throw for a five-point move. That cut the margin to 9-8 with 25 seconds remaining, but Green then ended the drama with a reversal just five seconds later to seal the win.

The Campolattano-George match-up was a battle throughout, as expected. The two were tied at 1-1 midway through the third when George got in deep on the two-time state champion and appeared to be poised to get the single-leg takedown. However, Campolattano countered by turning George to his back for a five-point play that gave him a 6-1 lead with :37 left. A George escape set up the final margin, 6-2.

This was the second time Campolattano has beaten George, with most people expecting them to battle once again for the 189-pound state title next month.

While all three Long Branch grapplers fell on Sunday, they continued to represent their team well, and prove that they will be tough to beat in Atlantic City.