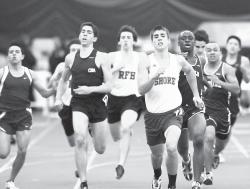 Shore Regional’s Rob Faccone (center) leads the pack in the boys 400-meter dash during the Monmouth County Track & Field Championships on Jan. 22. Shore Regional’s Cameo Kirk nears the finish line in the girls 400-meter dash during the meet, held at the Bennett Indoor Complex in Toms River. ERIC SUCAR staff The Caseys had just run a 7:59.35, the seventh fastest time in the country this winter and, more importantly, punched their tickets to the Metro 4×800 Relay at Friday’s Millrose Games at New York City’s Madison Square Garden.

The Caseys are one of eight teams from the Metro-New York area invited to compete in this new event.

“The kids are excited to be in the race,” said Caseys head coach Rob DeFilippis.

Rob Napolitano, Mike Quinn Kyle Clonan and Kevin Byrne make up the relay team that is heading to the year’s biggest indoor track and field meet. 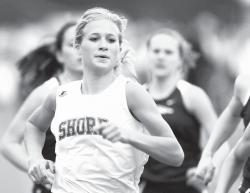 The Yale Invitational on Jan. 16 was the last chance for the Caseys to put down a time fastest enough to earn an invite to the Metro Relay. They made the most of it by finishing third and breaking 8:00.

Napolitano, a freshman, opened the race off for the Caseys by running a 2:04 leg. Quinn and Clonan each ran 2:00 splits, and Byrne ran a sizzling 1:54.4 to bring the team up to third place and under 8:00.

DeFilippis believes the Caseys can go faster. He pointed out that Clonan has been ill for much of the season and is just now regaining his fitness level. He can go under 2:00 as could Quinn. Napolitano doesn’t run like a freshman and has been getting faster with each race.

The eight-team field for the Metro 800 will include five teams from New Jersey, two of them are Christian Brothers Academy (CBA) and Freehold Township, which the Caseys are very familiar with. CBA has run 7:55.51 (third best in the country), and Freehold Township won the Monmouth County Relays over both CBA and Red Bank Catholic (RBC).

Also from New Jersey are Haddonfield (with a 7:55.44) and Morristown.

Completing the field are Bayport-Blue Point, which finished just ahead of RBC at Yale in 7:58.454, and New Rochelle from New York and Pennsylvania’s Abington.

teams. In Byrne, the Caseys have the fastest anchor. The goal on Friday will be for Napolitano, Quinn and Clonan to keep RBC in contact with the leaders to give Byrne the chance to run the leaders down.

Byrne will be looking to join his father as a Millrose champion. Kevin Byrne Sr. was a two-time winner of the High School Mile when he was competing for Paramus Catholic in 1976 and 1977.

Running on the small, high-banked garden track will present a challenge in itself.

“It’s roller derby up there on the turns,” said DeFilippis.

For the boys, Long Branch was second with Matawan to Christian Brothers Academy (50-36). The Green Wave’s Miles Shuler-Foster was the title County’s Fastest Sprinter winning the 55-meter dash in 6.50.

The Shore Conference Championship are Friday night (Jan. 29) back in Toms River.