Steve Birnbaum is hooked, and he’s trying to turn on as many people as he can to his passion, the game of pinochle. 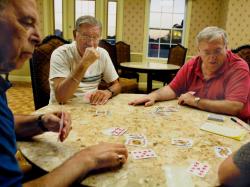 PHOTOS BY CHRIS KELLY staff Above: Bob Gordon (l-r), Tony Maida, Marty Tobias and Steve Birnbaum play partnership pinochle on a recent Monday evening at Monroe’s Stonebridge adult community. Below: Richard Quinto looks over his cards. The card game, he said, requires strategy, skill and a bit of a thick skin. And the more that people play, the better they get, and the more challenging and exciting the game becomes, according to Birnbaum.

“This is ‘feel good’ activity,” said Birnbaum, who introduced the game last year to other residents in Monroe’s newest adult community, Stonebridge, off Applegarth Road. “The residents’ eagerness to learn and play the game is a tribute to how good this game is.”

There are several variations of the game — cutthroat and auction pinochle, for example, but Birnbaum prefers partnership pinochle.

“Because it is a partner’s game. The complexity of the game is far more than any single player card game, except maybe bridge. In a way it’s a detective game in that you are looking for clues to what is in your partner’s hand,” he said. 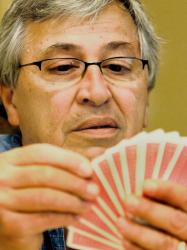 A pinochle deck looks different from an ordinary set of cards. It includes only high cards starting at nine and going up to aces. There are two copies of each suit, for a total of 48 cards.

Birnbaum learned the game in his youth, when his uncle lost one of the players in his foursome. His brother was already playing, so they recruited Steve.

“My poor brother,” he said with a laugh. “He put up with all my mistakes.”

That experience was the beginning of a lifelong passion for the game.

As an electrical foreman, he converted a group of lunchtime poker players into pinochle fanatics.

“We started with a small group and it just expanded,”

he said. Pretty soon, they were playing at each other’s homes on the weekends.

The same thing has now happened at Stonebridge.

“We started out with a handful of guys and it’s just grown,” he said.

Currently there are about 15 players who meet regularly on Monday evenings and on Fridays, when they play all day. 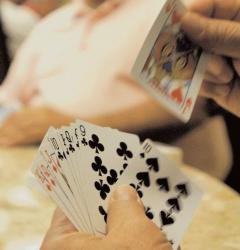 “The thing about pinochle is that once you learn it, you really love it. You hate to miss a game and you always like to talk about it afterward,” Birnbaum said.

In partner pinochle, players bid on their hands and then use tricks and melds to give hints to their partners as to the cards they are holding.

The terms may be a bit intimidating to a novice, but many of the most enthusiastic players at Stonebridge had never played the game before.

“Steve’s a great teacher,” said Don Babish, a resident of Stonebridge and a regular player who learned from Birnbaum.

One of the secrets to Birnbaum’s success is that everyone he teaches plays the same way. That way if they have to switch partners, they can.

“You have to be able to communicate with your partner,” he said.

Birnbaum has created a comprehensive and user-friendly website for pinochle players. It contains the rules of the game, tips and advice. There are hand evaluations to help new players, and memorable games, scores, statistics and a flow chart. The game schedule at Stonebridge is also listed.

Birnbaum’s website is listed on the Wikipedia page for pinochle under Comprehensive Pinochle Documentation.

Birnbaum said players from other adult communities in the area are welcome to join the group.

“We are a really friendly group and we are happy to teach new players. They could come here or we could go to other clubhouses,” he said.

Pinochle, Birnbaum said, is a lot of fun, but it is also great exercise for the brain.