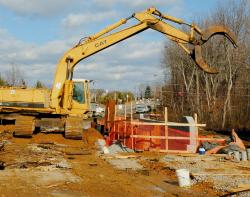 JEFF GRANIT staff Millhurst Road between Route 33 and Main Street in the Tennent section of Manalapan remains closed to traffic as construction continues on the demolition of an existing bridge and the construction of a new bridge. MANALAPAN — A road improvement project is once again interfering with the flow of traffic on Millhurst and Woodward roads.

After months of road construction on Woodward Road in 2008 resulted in extended closures and traffic back-ups at the Millhurst Road and Route 33 intersection, the scenario has now been reversed.

Road closures at that time were necessitated in order to widen and replace several bridges over culverts along Woodward Road. That work was done by K. Hovnanian, the developer of the Four Seasons and Meadow Creek housing developments that are being constructed in the area.

The final phase of the bridge replacement project associated with the construction of those Hovnanian housing developments is currently under way on Millhurst Road. It has caused a detour of through traffic and resulted in traffic backups and delays at the intersection of Woodward Road and Route 33.

According to Township Engineer Greg Valesi, a bridge demolition and reconstruction project on Millhurst Road about a quarter mile north of Route 33 is being performed by the Monmouth County Department of Transportation. As required by the developer’s agreement, K. Hovnanian is absorbing the cost of the project.

“They are replacing an antiquated (bridge) structure and widening the road,” Valesi said. “We’ve been told by the county that Millhurst Road will be opened by March 1.”

He noted that March 1 is an estimate and said everyone is hoping the county can complete the project within that time frame.

As of press time, a representative of the county had not returned a call from the News Transcript to confirm the date.

“There’s been work that’s been done on both sides of the (Millhurst Road) bridge for several months,” Valesi explained. “They did the work on each side to minimize the closure time.”

He said once the new bridge has been built the construction crew will repave Millhurst Road and then open it to traffic.

Manalapan Police Chief Stuart Brown is aware of the delays being caused by the Millhurst Road detour and has submitted a request with the state Department of Transportation (DOT) to have the traffic light at the intersection of Woodward Road and Route 33 retimed to allow for more traffic on Woodward Road to pass through the intersection on each green light.

Brown noted, however, that it may take some time before the DOT actually performs the adjustment on the traffic signal. In the meantime, he advises motorists to try to seek alternate routes and, as always, to proceed with caution.