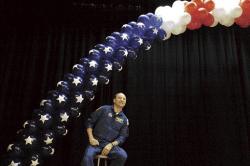 ERIC SUCAR staff NASA astronaut Mark Polansky returned to his native Edison on Monday and spoke to students at his alma mater, J.P. Stevens High School. Polansky commanded the space shuttle Discovery on its latest mission to the International Space Station. Monday was named Mark Polansky Day in Edison. Flying in space is like being at the top of a roller coaster, waiting for the drop. For astronaut Mark Polansky, it took two weeks to come down.

Mayor Jun Choi declared Monday Mark Polansky Day, and as part of the celebration, the astronaut visited his former physics classroom and talked with students about being in space and life as an astronaut.

Polansky has made two missions into space and has logged close to one month’s time in orbit. He said the first time he left the earth’s atmosphere, he was in awe of the beauty and fragility of the planet. 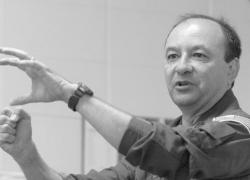 Astronaut Mark Polansky spoke to students at J.P. Stevens High School about his time on the space shuttle Discovery. He commanded the space shuttle in December on a two-week mission to the International Space Station. Polansky took time out to meet with members of the press during his visit. “The next thing you get to do is get a chance to look out the window,” Polansky said. He told the class that’s what he did once the G-forces died down and he entered low-earth orbit. “You’re working so hard and then you actually get to go and look out the window at the planet for the very first time, and you go ‘wow.’ “

But the “wow” factor soon subsided, Polansky said, and the crew got down to work retracting the space station’s temporary solar array and conducting the objectives of the mission.

A mission, he said, that was a “fantastic” mission, completed efficiently and safely, which he likened to winning the World Series. 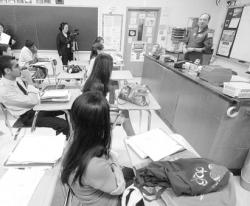 PHOTOS BY ERIC SUCAR staff Polansky has been with NASA for more than 10 years, but has logged only one month’s worth of time in space. For him, he has to enjoy the rest of the job just as much as space flight.

“We’re all there because we believe that what we are doing is important, not just for the United States, but for civilization as a whole,” Polansky said. “I think we’re really driven to do the things we do. It’s a nice feeling to know that you get to work with something that you really believe in and you like waking up and going to work in the morning.”

He is, at heart, an engineer. Polansky studied aeronautical and astronautical engineering, quite by accident, at Purdue University. He parlayed an interest in physics and a desire to work with NASA into two shuttle missions, numerous other work in training other astronauts, and served as chief of the CAPCOM branch eight months in 2002. He began work for NASA in 1992 and has logged 618 hours in space. He is currently in charge of the Shuttle Branch for the Astronaut Office. 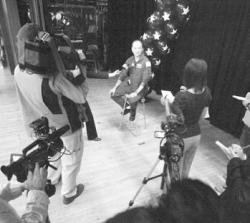 NASA expects to retire the shuttle program sometime in 2010 and replace it with manned space travel to the moon. With it would go roughly 30 years of exploration and two very public disasters.

Polansky said that retiring the shuttle is saddening.

“It is a marvel of engineering and does remarkable accomplishments, it does remarkable things in space,” Polansky said. “I’ll be very sad to see that come to an end, but at the same time, I know why we are doing it and I am excited about the future.”

The future of NASA will most likely be manned flights to the moon and Mars. It is something that, if given the opportunity, Polansky would take the chance.

“Who wouldn’t want to do that?” Polansky said. “I think it would be very exciting.”

Polansky first cultivated his love of physics in the halls of J.P. Stevens High School. Somewhere in those halls could be the next generation of astronauts. Polansky said that keeping students, especially girls, interested in science, math and engineering is key to the continued success of the country’s space program.

Polansky said he was impressed with the amount of females there were in the physics class he had visited and said that historically, women lose interest in those subjects.

“We need to make sure they realize they have the exact same opportunities as the guys do,” Polansky said.

He also said that becoming an astronaut means shying away from the easy road in life.

“It’s the people that try and do something because they think it is going to make them look good on a resume, but they have no interest in it, that are going to have the most problems,” Polansky said. “So I just say relax, enjoy life.”

From low-earth orbit (about 235 nautical miles above the surface), Polansky said the fragility of the planet is apparent.

“You see this very, very thin layer of blue, a very bright cobalt blue … that is the atmosphere, and you realize the only thing that separates us from total extinction is this little tiny layer that holds all the air in,” Polansky said. “It does make you think about trying to be a better steward of the planet because it is the only one we’ve got.”

One other feature of the planet that Polansky said was telling was the lack of boundary lines between countries.

“You’ll pass over places like the Mid-East,” Polansky said, “which has a very stark beauty to it. It looks very peaceful and serene. When you see that you can’t help but get a little philosophical and wonder about aren’t there better ways we can work and get along. Maybe, if people got to see the planet from the perspective that I’ve been privileged to see, there would be.”