Skip to content
Peruvian artist works to establish herself in N.J.
BY LINDA DeNICOLA Staff Writer 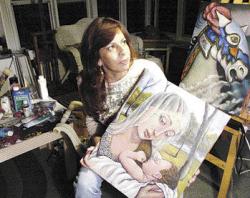 The first time she made a fresh start was when she graduated from college in Peru and began her career as a working artist. The second time she was forced to start over was when she moved to Fort Lauderdale close to her parents, who had relocated to Florida.

This time she is starting over after moving to New Jersey almost two years ago. Carlisle left Florida because she fell for a Jersey guy, David Carlisle, and wanted to marry him.

The name is appropriate because her artistic vision is boundless and so is her artistic ability. She can paint large trompe l’oeil murals and small portraits, as well as decorative art.

Carlisle’s artistic ability is grounded by a solid education in draughtsmanship, especially figure drawing and painting. She grew up in Lima, Peru, and studied fine art at the Escuela Nacional Superior Autonoma de Bellas Artes del Peru, or, as she explains, the national school of fine arts of Peru. 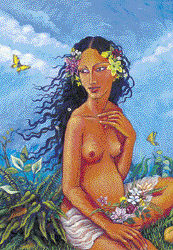 “Mother Nature” “I had a great education, very traditional. I was there for seven years and spent five of them painting the figure,” she said.

Carlisle graduated in 1987 and had her first solo exhibit that year. She has since had her work displayed in Indonesia, Spain and the United States.

Locally, her rather exotic work can be seen in the Main Avenue Gallery in Ocean Grove or on the Internet Web site www.mainavegalleria.com. Her work is also exhibited at Angelus, a religious store at 200 Broadway in Long Branch. Her prints for children are for sale at Kidigories in Shrewsbury and in June, she will have a solo exhibition at Cask 591 on Broadway in Long Branch. To reach the artist, e-mail her at angelzart@yahoo.com.

Carlisle concentrates on the figure, mostly female, but it is the figure in a context, or in a story, as she says. She explains that she starts with a small idea and a few brush strokes, then goes into a kind of dream state and her imagination takes over. Her oil paintings are vivid and sensual, colorful and tender, mystical as well as narrative. 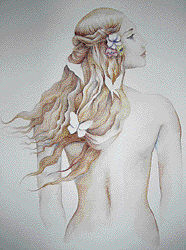 “Body Language” She credits the impressionist school of painting, and luminaries like van Gogh, Degas, Cézanne and especially Matisse with influencing her style.

She explained that after college she traveled to many places around the world, especially Europe. That experience also has influenced her style.

In Paris, she said, she was brought to tears by the beauty of the Impressionists’ art in the Musée d’Orsay.

“I started out as an impressionist, but I have evolved in many directions over time,” she said.

Right now, she is experimenting with watercolors and mixed media and is working on a watercolor of a woman whose flowing red hair is actually composed of naked torsos, some single and others intertwined. There are also acrylic butterflies in the painting that are done in the fool-the-eye trompe l’oeil style.

“The Rose” “I usually work in oil on canvas. Oil works well when I am exploring textures and colors, but it is important to try new things,” she said. “I want to stay fresh. Watercolor is faster. What is in my mind winds up on the paper.” But, she added, “Sometimes I’ll start a watercolor and realize that it has to be an oil.”

No matter what medium she uses, Carlisle is inspired by the human form.

“The eyes, the movement, they are so expressive,” she said.

She uses the people in her life as models, usually working from memory. She has painted her pregnant friend unclothed because, Carlisle said, she looked so beautiful. And she painted her husband while he was sleeping on his stomach.

While she keeps innovating, her style and her interests are essentially Latin. She gives her paintings names like “Sentimentos,” “Iluminada,” “Seduccion” and “Amor.” 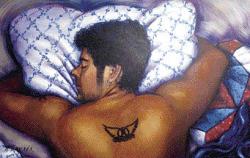 “Sleeping in New Jersey” “My experience with the kids feeds my creativity. They are amazing,” she said, but she was quick to add, “Painting is my life. Everything else surrounds it.”