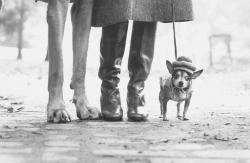 “New York City” by Elliot Erwitt, 1974 A photography exhibit at Monmouth Museum and Cultural Center promises to be a visual experience and a sociology lesson at the same time.

Four newly acquired photographs by a New Jersey photographer will be included in the upcoming exhibition, “Brook-dale Collects: Photographs from the Per-manent Collection of Brookdale Com-munity College.”

The extensive inventory of photographs from the permanent collection were collected between the years 1978-91 and include many well known images that hold a significant place in the history of photography.

The show opened March 9 and runs through April 22 at the Monmouth Museum on the Brookdale campus in Lincroft. 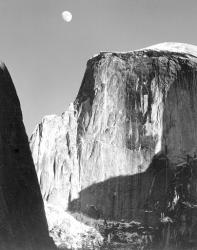 “Moon and Half Dome” by Ansel Adams, 1960 Arbus is reputed to have said, “I really believe there are things nobody would see if I didn’t photograph them.”

Certainly that is true of Stummer’s work. Labeled a visual sociologist, she is the author of a book of photography titled “No Easy Walk, Newark, 1980-1993,” which documents the dignity and the despair in the lives of impoverished inner-city residents.

Her dedication is evident in the works that span over 25 years. She has also worked on various other photo-essays for publications such as the New York Times, Frame Work, and Leica View to name just a few, Brookdale coordinator of public relations Carol Ann Hafner said.

Stummer’s photographs are in the permanent collections of the Library of Congress, the Brooklyn Museum, the Newark Museum, the Museum of the City of New York and the New Jersey Historical Society, as well as many other institutions and private collections.

She has exhibited her work and lectured extensively including a lecture given at Brookdale Community College in 1995. 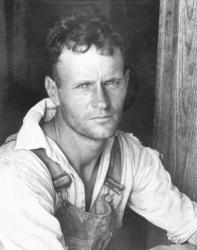 “Floyd Burroughs a Cotton Sharecropper” by Walker Evans, 1936 According to Stuart Thomas of Brookdale’s photography department, Stummer had a show at the college about 10 years ago. It was work from her ongoing documentary photos that are in her book. She has remained in contact, he said, adding that she knew about the collection and was pleased to be asked to contribute.

Thomas explained that Herbert Edwards was instrumental in starting the collection.

“Herb taught photography and painting at the college and started the photography department in the mid-1970s. He got some funding and was able to acquire a good number of works.

“As for Helen, since we are a New Jersey funded and based institution, we thought it would be nice if we could collect New Jersey-based photographers like Stummer.”

Thomas said the photographs in the collection are used in the classrooms as good examples of original work. 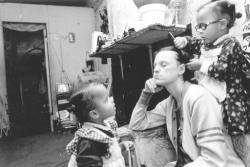 “Shirley’s Twins, Evette & Bernadette, Playing Mommy” by Helen M. Stummer, 1979 “This is first time the entire collection has had a venue,” he said.

The collaboration between Monmouth Museum and Brookdale promises to be an event worth noting. It makes sense because the Museum is on the Brookdale College campus.

Avis Anderson, the museum’s director, said shortly after she began her job, that her goal for the future of the museum includes expanding the view of many Monmouth County residents that the Monmouth Museum is just a children’s museum; re-establishing the museum as a cultural center which offers a wide variety of activities to a more diverse audience; broadening the museum’s relationship with Brookdale Community College by establishing co-sponsored events, intern opportunities and partnering in the areas of grant-seeking and fundraising.

“This is the first really big collaboration,” Anderson said.

As part of the exhibition, on March 20 from 7-9 p.m. there was a panel discussion on collecting photography with experts in the field of collecting. They included Michael Bzdak, director, corporate contributions, Johnson & Johnson; Sarah Northland, director, Archive Con-sulting and Management Services; Stephen Perloff, editor, the Photo Review and The Photograph Collector; and Joel Smith, curator of photography, Princeton University Art Museum.