Above, Freehold High School students placed personal items at a roadside memorial where three of their fellow students were killed in a Jan. 10 collision. At left, friends of the three teenagers came to the Kozloski Road, Freehold Township, site on Jan. 11 and signed a T-shirt for the boys at a roadside memorial. Freehold Borough and Freehold Township are connected in many ways. On Jan. 10 the two communities became joined in one more way – mourning the death of three students who lived in the township and attended school in the borough.

Michael Dragonetti, 17, James Warnock, 17, and Andrew Lundy, 16, all residents of Freehold Township and all students at Freehold High School, Freehold Borough, were killed in a motor vehicle collision shortly after 2 p.m. on Kozloski Road, Freehold Township.

The two-vehicle crash also claimed the life of Ruth MacArthur, 68, of Old Bridge.

The days following the crash brought forth an outpouring of emotions as those who knew the victims remembered them. 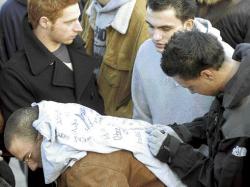 PHOTOS BY JEFF GRANIT staff At one point Freehold Borough Councilman Kevin Kane came to the scene of the collision with his wife, Ellen, and daughter Katie, who attends FHS. He said he could not imagine what the parents of the three teenagers were going through.

“It is every parent’s worst nightmare,” Kane said. “From the age of 16 until they are out of college, you just hold your breath every time they go out the door.”

Kane said because the high school is so small (about 1,400 students), everyone knows everyone else, which is one of the things he said makes FHS so great. Kane said that same fact will also make the grieving process as hard as it can possibly get on all of the teenagers left behind to grieve.

“There will be a tremendous void in everything they do for the rest of this year,” he said sadly.

Kane knew Warnock and said he was a student who was full of school spirit, making sure he attended every event, sports or otherwise.

“Everything centered around him and he was always capable of getting the others excited about school events,” he said.

Michael Dragonetti Kane said he has offered help to the community.

“Anything we can do, we’ll do,” he said. “This is the most horrible tragedy. There is no script for this kind of thing.”

Among the teenagers who came to pray and comfort one another was sophomore Lauren Truilli, who said she knew Lundy from elementary school. She said she was stunned and shocked by the events of Jan. 10. She tried bravely to hold back the tears that eventually consumed her and could not say anything more.

Another student, Mike Galetti, said he had seen Dragonetti that morning.

“Hey, how are you doing, Mike?” were the last words he would ever say to his friend.

Dragonetti, a senior at FHS, was the captain of the Colonials’ football team this past fall. He was the son of Michael and Theresa Dragonetti. He is also survived by a brother, Nicholas.

When FHS football coach Mark Ciccotelli and his staff were deciding who should captain the 2006 team, Dragonetti was an easy choice for a number of reasons.

Andrew Lundy “He was a model student, a model human being,” Ciccotelli said. “He was the type of kid that if you had a son, you would want him to be just like Mike. You would be a proud father.”

On the gridiron, Dragonetti’s heart was second to none. Weighing 185 pounds, he was small by offensive tackle standards, but that did not stop him from becoming a starter and one of the team’s best linemen.

“He was what high school football is all about,” Ciccotelli said. “He just persevered. He had all the intangibles – work ethic, accountability, a sense of teamwork. He wasn’t the fastest, strongest or biggest player, but he played hard and he was there for the other guys.”

Dragonetti was such a student of what he did that it led Ciccotelli to say, “At times you thought you had another coach on the field.”

From his first day on the practice field as a freshman, Dragonetti was a leader who drew his teammates’ respect.

James Warnock “All the kids on the team loved him dearly,” Ciccotelli said. “He’s going to be missed.”

Warnock, a senior at FHS, was the son of James and Elizabeth Warnock. He is also survived by his brothers, Michael and Thomas, and sister Jessica.

Lundy, a junior at FHS, was the son of Theodore and Barbara Lundy. He is also survived by his sister, Brooke, and brothers, Jason and David.

“He was taking guitar lessons here for a long time. He and his parents are really nice people. It’s tragic. I can only imagine what his mom is feeling. It’s just crazy,” Lofrano said.

MacArthur, a retired nurse, was the mother of four children, the grandmother of 14 children and the great-grandmother of one child. She was a driver for special needs children for Unlimited Auto of Keyport. She is also survived by her husband, Robert MacArthur.

During a press conference held several hours after the crash, Monmouth County Prosecutor Luis A. Valentin said the Cadillac CTS with Dragonetti at the wheel crashed and exploded into flames after it collided with a Dodge Caravan being driven by MacArthur. The crash occurred on Kozloski Road, a short distance south of Dutch Lane Road. 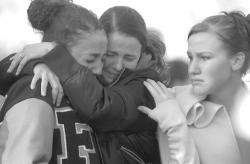 JEFF GRANIT staff Freehold High School students console each other on Jan. 11 as they visit the site on Kozloski Road, Freehold Township, where fellow students Michael Dragonetti, Andrew Lundy and James Warnock were killed in an accident on Jan. 10. The Dodge Caravan was a certified school transportation vehicle owned by Unlimited Auto and MacArthur was transporting a 13-year-old student at the time of the accident. The student, according to Valentin, was seriously injured and taken to a local hospital.

Later in the week Valentin said the youth was recovering.

Valentin said the accident occurred at 2:12 p.m. The three teenagers were riding together in the Cadillac going south on Kozloski Road. Dragonetti was driving the vehicle, Warnock was in the front passenger seat and Lundy was in the back seat.

MacArthur was driving the Dodge Caravan north on Kozloski Road, which is a four-lane road with no divider. The speed limit is 50 mph.

Valentin said there was some indication “that the Cadillac was being driven at an increased rate of speed.” He said he could not provide an exact speed.

The teenagers and MacArthur were all pronounced dead at the scene, according to the prosecutor.

Valentin said, “They were all students at Freehold High School and they were all close friends and their families were close as well. The car collided into the Caravan and caused the Cadillac to burst into flames.

“It is important to impress upon young people that it is unsafe to operate a vehicle at increased speed. Young people do not fully comprehend the dangers involved from excessive speed. There are incredible resources that make cars go very fast today. We have many open roads here and young people underestimate their actions,” and this causes unfortunate loss of life and innocent victims, he said.

Valentin extended his prayers to the families who lost a loved one, to the educational community and to the teenagers “who will have to deal with this unfortunate senseless loss of life.”

“We have tried in this office and have partnered with law enforcement agencies to encourage highway safety in the county,” he said. “We must impress on young people that they must understand and be responsible when they drive so that this loss of life will not be for naught.”

Valentin subsequently confirmed that Dragonetti was in possession of a provisional driver’s license. Provisional license drivers between the ages of 17 and 21 are permitted to have only one passenger at a time and are prohibited from driving from midnight until 5 a.m.

In the immediate aftermath of the accident, Freehold High School Principal Linda Jewell came to the East Freehold firehouse to support her students. Jewell had already prepared her staff for the worst-case scenario even before she had confirmation of the students’ deaths. She said she had arranged for the high school to be open on the night of Jan. 10 so that students could come back and be together as a family.

She also arranged for counselors from her school and other schools in the Freehold Regional High School District to come to the school and help students work through the grieving process.

“There is no way to make sense out of any of this,” Jewell said. “I just saw these students a little over an hour ago. These teens were everyone’s best friends.”

FHS students returned to the scene of the crash on the morning of Jan. 11 to honor their friends with a sign and personal momentos. One sign had the names of the three teenagers carved into wood with one word written above their names – “Remember.”

The crash is under investigation by the Freehold Township Police Department and the Monmouth County Prosecutor’s Office. Valentin asked anyone with information about the collision, the events leading up to it or subsequent to the crash to call his office at 1-800-533-7443 or Freehold Township Detective Francis Boutote at (732) 462-7500.

Funeral arrangements for Dragonetti, Warnock and Lundy were handled by the Clayton and McGirr Funeral Home, Freehold Township.

Funeral arrangements for MacArthur were handled by the Day Funeral Home, Keyport. A service was held Monday at the funeral home.