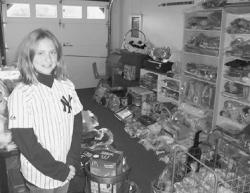 JENNIFER AMATO Kayla Kapler, 10, proudly displays the hundreds of toys she is donating to a rummage sale in Milltown in honor of her late great-grandfather, James Voorhees. NORTH BRUNSWICK – Before reading through the Big Toy Book from Toys “R” Us, children may want to check out St. Paul’s United Church of Christ in Milltown this weekend.

Ten-year-old North Brunswick resident Kayla Kapler is donating over 100 toys to the rummage sale in honor of her great-grandfather, James Voorhees, an active member of St. Paul’s who passed away in April.

“I hope the kids can play with the toys as much as they can, like I did, with their grandparents or parents,” she said.

Kapler is giving away Barbie dolls, stuffed animals, books, baby toys, building blocks, a child shopping cart, a bilingual talking laptop and a piggy bank, among other items, for the Nov. 10 and 11 sale. Most of the toys were bought by her “Pop Pop” and are still in good condition.

The most special item she is giving away is her chalkboard easel.

“My grandfather and I used to play with that. We would play school. I would be the teacher,” she said.

She is also donating two games they played last Christmas, just a few months before he passed away. Her family also donated two truckloads of Christmas decor, pocketbooks and a set of dinnerware for four. It took three weeks to clean the house, decide which items to donate and package them for easy selling.

The profits from the flea market will benefit a trip to Bluefield, W.Va., for the church’s senior youth group. The city was an industrial, financial and corporate center in the 1880s due to its massive coal supply, but since 1940 the population has decreased about 45 percent due to technological advances in mining, causing unemployment for miners and the closing of local businesses and schools.

The group’s July 2007 mission will seek to aid YouthWorks in providing support and volunteers to existing social service organizations there that serve meals to the homeless. They will also run a kids club and help do home repair and painting. The goal this weekend is to raise part of the $30,000 needed for the cost of 32 youths and eight adults to visit the area.

Kapler’s great-great grandfather was a coal miner, so her great-grandmother, Catherine Voorhees, James’ wife, believes in the importance of assisting these families.

“Believe me, every time the whistle would blow we would say we hope he comes out alive. I know what these kids go through,” Voorhees said.

However, the focus for Kapler and her great-grandmother will be honoring the memory of their loved one. Kapler attended Bible class since the age of three at St. Paul’s with her great-grandfather and most fondly remembers bringing him dinner while he was collecting tickets for a roast beef dinner held there.

“He almost raised me when I was younger. He was like a dad – he would play with me,” Kapler said.

“I’m happy and a little sad,” she said of her efforts, “because he’s not here for me to tell him.”

To keep his memory alive, she talks about him a lot and has photographs of him everywhere. Also, after his funeral, she and her great-grandmother took a floral arrangement in the shape of a guitar, removed the fresh flowers and replaced them with fabric ones so they could keep his love of music alive as well.

“He just took to [Kayla] since the day she was born,” Voorhees said.