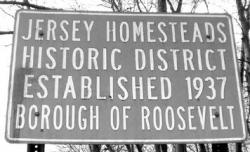 Those in New Jersey who may not know where Roosevelt is, will now.

The April edition of NJ Monthly magazine that officially hit newsstands March 28 rated the borough of Roosevelt the No. 1 place to live in the state of New Jersey.

NJ Monthly Editor David Chmiel said, “The fun thing for us is that this seems to be generating a lot of debate. Roosevelt is in a time vacuum. It’s charming and in lots of ways anti-New Jersey.”

The Morristown-based magazine, which has been in publication since 1976 and has a circulation of 160,000, ranks all of the municipalities in New Jersey annually with help from Monmouth University’s Polling Institute, Chmiel said.

This year, the institute considered eight categories that would best represent the quality of life in New Jersey’s 566 municipalities, Chmiel said.

The magazine ranked the municipalities based on property taxes, home values, population growth, land development, employment, crime rate, school performance and proximity to services such as hospitals and theaters, according to Chmiel.

“This year we decided to take out median household income as one of the criteria because it should not be about how much money people have,” Chmiel said.

Chmiel said usually when polling of this sort takes place, the municipalities deemed to have the hottest ZIP codes are usually those with residents in the upper tax bracket.

“The towns that are usually considered hot are those like Rumson, Short Hills, Somerset, Moorestown,” Chmiel said. “Places where people have a lot of money.”

Chmiel said he expects criticism for his magazine’s declaration regarding Roosevelt.

“I’m sure some people will be snippy because it is so different from the traditional top towns,” Chmiel said.

When asked whether he had heard about Roosevelt before the polling, Chmiel said, “Our magazine did a six-page feature on the town a couple of years ago. So a lot of people in our office knew about it, but most people don’t.”

The approximately 2-square-mile town nestled in western Monmouth County was a cooperative project commissioned by the federal government for urban garment workers. The town was originally called Jersey Homesteads.

Many of the dwellings were built in the bauhaus style, although the borough is also home to five geodesic domes. The small town has only a post office, a school and a deli.

“It hasn’t had any new development,” Chmiel said. “It is surrounded by open space and its refreshing that its residents stay true to certain principles.”

When asked what kind of impact NJ Monthly magazine believes the ranking would have on Roosevelt, Chmiel said, “That is the exciting thing. Maybe people who don’t know or haven’t heard about Roosevelt will go there to find out what it is all about.”

Roosevelt resident Jeff Ellentuck said he is delighted that Roosevelt has been recognized as a wonderful community and a great place to live.

“I am only sorry that the secret is out,” Ellentuck said.

Ellentuck continued, “While the borough scored well on the standard indicators, I think our greatest asset is the people who live here. They are generally well educated, artistically inclined, very community-minded and willing to devote their time and effort to preserve the character of Roosevelt.”

Ellentuck said the community owes a special debt to people like resident Rodham Tuloss, who has worked tirelessly to preserve the open space in the borough, and to the many people who volunteer to help the borough and its school.

Resident Ed Moser said he wonders about the effect of the notoriety.

“Will it start pressure for a building boom?” he asked. “Will it, to torture a phrase, fry the golden egg? Will we have to start a new campaign to keep our tight little town?”

‘Two of our children came back here to raise their families, proof positive that we believe this community is the best place to live anywhere,” he said.

Roosevelt resident Michael Ticktin said, “It is certainly as encouraging as it is surprising for us to find ourselves first in a list of top towns.”

Ticktin said in fairness, residents must recognize that any ranking of this sort depends on the variables used.

“The variables here are clearly not the ones that produce the usual lists of towns where a lot of rich people live,” Ticktin said. “I doubt that there will be any migration from Rumson or Far Hills to Roosevelt as a result of the publication of this list.”

Ticktin added, “It is most refreshing to see the values of community prevailing over those of plutocracy for once.”

Mayor Elsbeth Battel said she was surprised to find out NJ Monthly picked such a modest little town.

“But those who know Roosevelt, love it,” Battel said. “The two best things about Roosevelt are the sense of community and the willingness of so many individuals to volunteer for the good of the whole.”

Battel said living in Roosevelt “isn’t so much being a citizen in a town, as being a member of a family.”

“That is precious, and hard to find in a modern industrialized society,” Battel said.

Battle also praised the Roosevelt Public School for fostering good qualities in its students, the borough’s commitment to preservation of farmland and open space, and residents’ appreciation of and active participation in the arts.

Former Mayor Neil Marko, who voters recently ousted in a recall election, said, “Everyone in Roosevelt knows what a nice place it is to live except for the Orthodox Jews that, as Ralph Seligman puts it, are considered a threat to our communality by a bunch of old-timers.”

An article that appears in the April edition of NJ Monthly about Roosevelt quotes Seligman as saying the recall “vote against the mayor was the expression of that communality. This business against the mayor was led by secular Jews-old-timers. We have coexisted and we have welcomed everybody.”

The article also states that Seligman said the recall election came about because of the mayor’s plan to run a private Orthodox Jewish High School at the local synagogue, Roosevelt’s only house of worship.

With regard to the article, Marko said, “This is just a nice spin on plain old intolerance and bigotry. If the editors of NJ Monthly had looked past their advertisers’ dollars, they would have seen that.”

The median home sales price in the borough amounts to $215,000 with a 235 percent increase in property value since 2000.

The median property tax in the town is $4,556, and the borough preserved 23 percent of its total land, which is approximately 2 square miles, by 2004.

The borough’s crime rate is 0 and its jobless rate is 2.9 percent.

Other towns in the Top 10 include the Monmouth County municipalities Sea Girt and Spring Lake Heights, which are ranked No. 9 and 10 respectively. The No. 2 place is Chatham Township in Morris County and the No. 3 place is Essex Fells in Essex County.

For more information go to www.njmonthly.com.