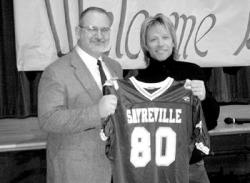 Sayreville War Memorial High School Principal James Brown presents Jon Bon Jovi with his very own Bombers jersey last week when the singer, along with a crew from ABC’s 20/20, paid a visit to the school. SAYREVILLE – The man who may well be the borough’s most famous son made a return to his alma mater last Thursday.

Jon Bon Jovi arrived at Sayreville War Memorial High School the morning of March 16 to talk to more than 60 students for a half-hour in the school auditorium, an appearance filmed by ABC for the “20/20” television show.

Students were not told that the rock star, who graduated from Sayreville in 1980, was coming to the school until the morning of the event, although many picked up on the clues – they had to return permission slips allowing them to be filmed, and a large “welcome home” sign was posted at the entrance of the school.

The 60 students, all involved in performing arts, were ushered from their classrooms to the auditorium by a show producer, according to Brown, who said the students were very excited to see Bon Jovi.

“The kids’ reaction was electric,” Brown said. “I think it was a warm greeting. He is a tremendous entertainer, and he spoke well. The kids really enjoyed it.”

Bon Jovi, who now lives in Middletown, Monmouth County, touched on his past and how he became who he is today, according to Brown.

Students asked Bon Jovi about his greatest accomplishments, his music, memories of his hometown, and what it takes to make it in the music industry.

Bon Jovi, whose name was spelled Bongiovi until he changed it as an adult, told them it’s been many years since he had been back to the high school.

Maureen Proudman, secretary to the superintendent, was present at last week’s event and recalled that Bon Jovi always loved football, but was too small to play for the school team. So it was only fitting that upon his return the school give him a Sayreville Bombers jersey with his name on it.

“He was phenomenal with those kids,” Proudman said of Thursday’s assembly. “The answers he gave [them] and the way he credited his family. The whole thing was great.”

Seniors Caitlin Bovery and Danny Giovenco, both 17 and honors students at the school, were able to greet the entertainer before the event. Danny recently performed in a school variety show where he sang Bon Jovi’s “Wanted Dead or Alive.”

“It was ironic and surprising that he actually came,” Danny said.

Danny, a school choir member who will attend The College of New Jersey in Ewing next year, said meeting one of his favorite performers was “surreal.” The answers Bon Jovi gave to questions on his career and inspirations were both sincere and enlightening.

“He really emphasized that desire was the key,” Danny said. “You have to want it so bad that it hurts.”

Caitlin said she has been a fan of Bon Jovi all of her life.

“I cannot remember not knowing who Bon Jovi was,” Caitlin said.

Like Danny, Caitlin is active in the school choir. She is also in the theater group and recently played the lead role in the musical “Once on This Island.” She will attend The College of William and Mary in Virginia to study marine biology next fall.

“He was really nice,” Caitlin said of Bon Jovi. “It was great to hear a famous performer answer questions.” Caitlin was particularly impressed with the artist’s answer to what his greatest success was.

“It was very down-to-earth; it was his family,” she said. “It was awesome to hear that from someone who is famous.”

Greeting Bon Jovi before the event was “overwhelming” for Caitlin and Danny.

“We smiled for the rest of the day,” Caitlin said. “We never stopped.”