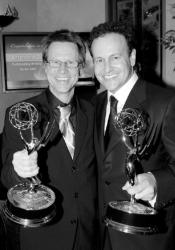 “He said, ‘Hey, do you want to be in ‘West Side Story’?’ That got me going into a whole new career,” Vallely said.

Vallely, who now lives in Los Angeles, won an Emmy award Sept. 18 for his work as a writer on the Fox comedy series “Arrested Develop-ment.” Series creator Mitch Hurwitz also received an Emmy.

“It was a fluke,” Vallely later said with a laugh. “That’s how all comedy writers feel about themselves.”

Despite his modesty, Vallely said it was a wonderful thrill to win his first Emmy and second award overall.

“I’ve been doing this a long time,” he added.

After graduating from high school in 1972, Vallely took on stand-up comedy by helping form the Funny Boys troupe during the late 1970s.

Following the birth of his daughter Tannis in 1975, he attended Middlesex County College, Edison, and New York University before finally heading to California in 1982.

After several television roles and appearances, including a coveted spot on “The Tonight Show” with Johnny Carson, he decided to switch gears, becoming a writer for the popular “Golden Girls” television series in the late 1980s. He has also written for “The John Laroquette Show” and, more recently, “My Wife and Kids,” starring Damon Wayans.

But it’s been Vallely’s co-executive production and writing efforts for “Arrested Development,” a critically acclaimed program that began its third season last week, that have allowed him to bring home the hardware.

The show has six to eight writers who often spend hundreds of hours preparing scripts for the show.

“We just keep talking until everybody laughs,” Vallely said. “The hardest thing to get is a feeling of spontaneity. That’s very important in comedy.”

“When you’re in production,” he added, “you have to get scripts out, you have to produce the show, edit it. We have a lot of plot, a lot of characters. It’s almost like taking a one-hour show and condensing it into a half-hour.”

Despite his career in Hollywood, Vallely doesn’t like to toot his own horn.

Vallely was more eager to speak of where he came from and who made him the person he is today. He credits his parents, Ruth and Bill, who still reside in Middlesex County, with developing his off-beat sense of humor.

“We come from a family that laughs a lot,” he said.

And despite his successes in Hollywood, Vallely said it’s his twin sister Susan, of Milltown, who does the real work.

“She works for Johnson & Johnson and was helping them with hurricane relief efforts,” he said. “She does the real work; I do fun work.”

Vallely said he would like to eventually recognize his East Brunswick roots by starting a scholarship that could help kick-start the potential careers of other performers.

“The East Brunswick High School arts programs are so important,” he said. “They are really a great, great thing.”

For now, Vallely will continue to contribute to “Arrested Development,” a show that in three years has developed a rabid fan base, partly due to one of East Brunswick’s native sons.

“This is a show people find, and when they find it, they really seem to like it,” he said. “Hopefully, as long as the network seems to like it, we’ll continue doing it.”