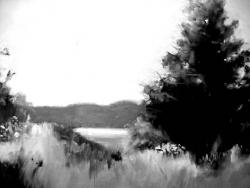 Monet did it; so did Manet and Renoir. But chances are none of these renowned Impressionist painters had to lug along the kind of gear that a group of intrepid local artists do when they paint en plein air.

"There are a few items other than rain gear that we have come to think of as standard equipment — bug spray, sunblock and bottled water," explained artist Judy Stach. "I have even brought an anchor with me [a small one] to wrap around my easel when painting in the wind off the Navesink River!"

Stach, Little Silver, is the founder of Plein Air Painters of the Jersey Coast, a group that meets weekly to paint scenes of the coastal area at locations like Marine Park in Red Bank and Sandy Hook.

"We started in May with three of us," she said. "Word has spread, and we now are 18 artists. We meet in a new location every week and paint from 9 a.m. until 1 p.m. and then critique each other’s works. The support we show each other is what makes this work so well." 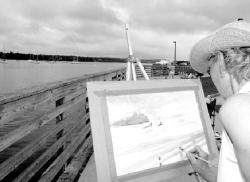 PHOTOSBYCHRIS KELLY staff (Top) A scene painted in oils en plein air at Sandy Hook by Anthony Migliaccio, Long Branch. Barbara Grena (above), Jackson, paints swiftly to keep ahead of changes in light and shadow during a session of the Plein Air Painters of the Jersey Coast at Marine Park in Red Bank. At left, supplies for plein air painting must be portable.

According to Stach, there are three essentials to plein-air painting – "a fabulous view or vista, something to duck underneath if it rains, and a bathroom nearby."

"Everybody is very mobile," added plein-air painter Anthony Migliaccio. "You need things that are portable. Easels fold up pretty small. Mine is a tripod and goes in a bag. I have a way of transporting paints. I put my oil paints into a pillbox so I don’t have to deal with tubes

"You get bugs that stick to your paint, you get dirt on your painting because when you’re done you have to carry your painting back to the car," noted Migliaccio, Long Branch. "I had two workshops at Sandy Hook and got rained on twice. Standard operating equipment is an umbrella that clips onto your easel. But it’s a quality outdoor experience, and you learn to deal with it."

Wherever they set up their easels, the group attracts onlookers, Stach said, and eventually the plein-air painters came to the attention of local galleries. 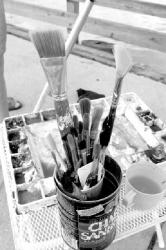 "We have been approached not only by the public, who see us at work and ask or comment about what we are doing in the most adorable way," she said, "but we have been approached by a few galleries and are thrilled to have our first show at the Guild of Creative Art, where several of us are exhibiting members and a few of us teach as well."

"The Plein Air Painters of the Jersey Coast" opened last weekend at the Guild, located at 620 Broad St. in Shrewsbury, and will run through Sept. 27. Gallery hours are noon to 4:30 p.m. Monday through Saturday.

In addition to portability, Migliaccio said plein-air painting forces artists to distill the trappings of their art down to a minimum.

"I only use seven colors," he explained. "It’s a very limited palette, and it really helps you because you have to mix the colors to get the true colors. When you use premixed colors, you really become dependent on those colors. You’re really not using the visual cues you need to when you’re painting out of doors."

In 2002, Migliaccio, an arts educator at Red Bank Regional High School, was awarded a fellowship by the Geraldine R. Dodge Foundation to support a summer of plein-air painting in northern Italy and the south of France.

"When you paint outdoors, you capture the moment. The sunlight moves very rapidly, and you’re dealing with very natural shadows and the sky reflects in the water," he explained. "You get beautiful colors and tones.

"Painters of the latter part of the 19th century, Impressionists and post-Impressionists, did a lot of painting in the south of France because the light there is so dramatic and so powerful," explained Migliaccio. "Monet, Renoir, Manet, one of the reasons they were important was that they became fascinated with the true colors of light hitting surfaces.

The transient nature of light and shadow pose a challenge to plein-air painters, explained Barbara Grena.

"You have to work pretty fast to get your first impression, because the light changes so fast," said Grena, Jackson. "As an hour passes, or two, you’ll see a whole different light. At the beginning, you try to get most of it, lay in the color and work with your first impression of what you see. Shadows change, everything changes. Noontime is really the most difficult time because the light is so different. There are no shadows at noon, the light is very bright. But in the morning it’s more subdued, the sun has just come up."

According to Stach, the challenges of plein-air painting tend to winnow the number of practitioners down to a hardy few.

"The people that show up are very serious artists because you’re putting up with all the elements," she explained. "It’s the most difficult type of art to do because nothing is controlled. Conditions like light and shadow constantly change. It’s fun, but you contend with that. It’s not painting for sissies, it’s painting for serious artists."