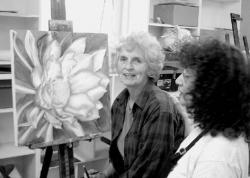 In the long, low-slung arts and crafts building at Thompson Park in Middletown, artist Grace Graupe-Pillard holds what she calls "my little school."

Her little school, which is really a Monmouth County Park System painting class, consists of three rooms in the Thompson Park Craft Center that smell of oil paints and linseed oil. For Graupe-Pillard and the artists who use oils, the smells are empowering — like blood to a shark.

Graupe-Pillard teaches all day and into the night on Tuesdays, and spends the rest of her week creating mixed media and public art in her Keyport, or New York City, studio. Her not-so-little school is made up of at least 100 artists with varying degrees of expertise. In the May-June classes, she had 112 students spread throughout the four sessions.

"I have new students and other students who have been with me since I started in l975 in a barracks-type building at Tatum Park," she said last month, adding that she arrived at 7:30 a.m. to set up and left around 10 p.m. after she had put away all the easels, the paintings that students leave behind, and equipment such as jars, paper towels, and the tea and cakes that the students bring to class.

Susan Liu, assistant superintendent of recreation for the Monmouth County Park System, said she has known Graupe-Pillard for about half the time that she has worked for the park system.

"I have always found her to be a diverse professional artist. As an instructor, she is dedicated to her students. Every week, she meticulously sets up the easels in each classroom. I always remind her that the students can set up their own easels. Grace replies, ‘I know, but I want the students to be able to come in and begin working,’ " Liu said.

Virginia "Ginny" Carlyle is one of the students who has been studying with Graupe-Pillard for a long time. "I started with her in the 1970s, not knowing anything about her or the class but just wanting to paint. What an excellent decision that was!"

She explained why she feels that way.

"Grace’s class is a total experience. Most everyone comes back, session after session, not only to paint but to enjoy the atmosphere. I think I have not missed one session in all these many years."

Carlyle has come a long way under Graupe-Pillard’s influence, and has had a number of solo and group shows. "In 1980, she gave my name to the Red Bank library. I had my first solo show. A few years later, the same happened with the Long Branch library.

"I then moved on and have had three one-person shows at Thompson Park, and have also shown in many group shows including the Monmouth County Arts Council show at the Monmouth Museum and the Art Alliance state shows," she said, explaining that she has also shown in statewide exhibitions as well as nationally.

"I would have not known about these if it were not for Grace. The fact is, I would credit her for much of my successes," Carlyle said.

"I appreciate viewing art at all levels of accomplishment. I listen to my own voice encouraging students to be themselves, not to make art that looks like art, but art that comes out of an inner necessity. That voice keeps me honest in my own work," she said.

Her own work is amazing — completely original and complex, layered with many references, and dense with symbolism and rich colors. Her large, mixed-media collages are the works of a mature artist who labors to bring her social and feminist concerns to life in a way that is also beautiful on the surface.

"I believe that the better your technical skills are, the easier it is to abandon them later as you can then experiment from strength with form and color. I think that this whole process is not always inspirational, but rather painstakingly tedious," she says.

Graupe-Pillard has knee problems and limps good-naturedly from one artist to another, from one room to another, commenting and making suggestions on works in progress. Like a shark moving gracefully through its environment, she moves between the easels and sees everything. While giving constructive advice to one students, she notices that another student across the room is using the wrong color. "More hue," she yells.

In the large main room, many of her students endeavor to create on canvas their vision of one thing or another. One woman works from a photograph to capture a moment in the lives of her three grandchildren, another woman is painting a huge peony, and two women and one man are painting the still lifes that Graupe-Pillard set up almost 10 years ago when the class moved into the building.

In fact, the still lifes are so dusty that she has to remind them that the colors are a little faded. The students painting the still lifes are the beginners, at least in her class. Pillard tells one student to slow down and really look at the details. When the student complains that it looks as though she will be working on the same painting for the whole six-week class, Graupe-Pillard says, "At least."

"They need to see like an artist, to see shadows and highlights and shapes and color saturation," she says, gesturing around the room. "But first, one has to learn the basics of how to paint, and I am good at teaching students to do that as evidenced by the results."

On every easel is a work that is worthy of the effort.

"I treat each student individually; there is no one style that is better than another," she adds.

She tells one man, who is a skilled technician, to try something new. She is firm when she tells him that his style is old hat and that if he wants to continue to paint in the same vein, he doesn’t need her class.

Graupe-Pillard is sure of herself when it comes to artistic expression. She has a right to be. She is a master artist who shows in New York City galleries, sells her paintings for thousands of dollars and has won numerous commissions to create public art.

"I just found out that I will be doing an apple for Big Apple Fest in New York City as pre-publicity," she says, obviously pleased that she has been chosen.

According to a press release from NYC & Co., a charitable and educational organization, top local and international artists will decorate oversized apples as part of the Big Apple Fest, a public art initiative to promote the city and benefit charities.

At the conclusion of the exhibit, Sotheby’s will hold an auction of the apples, with a substantial portion of the proceeds going to certain charities.

She has also been invited, for the second year, to teach a master class to professional artists.

"I’m teaching the Edwin Abbey Mural Workshop at the National Academy of Design in N.Y.C. [on 89th Street and Fifth Avenue]. This will be my second year leading this intensive four-week workshop on the nuts and bolts of public art."

Graupe-Pillard has exhibited throughout the United States as well as in a number of galleries in New York City. She has designed many public art projects commissioned by the likes of AT&T, Peat Marwick, the Port Authority Bus Terminal in N.Y.C., Robert Wood Johnson University Hospital in New Brunswick, and the city of Orange.

She has also been commissioned by NJ Transit to create pieces for the Aberdeen/Matawan train station, the Garfield Avenue station, Newport PATH station in Jersey City, and the Hoboken station. The one in Hoboken will be unveiled soon, and the one at the Aberdeen-Matawan station has been up for a few years. The latter’s porcelain enamel sculpture is called "Gateway to the Shore."

In addition to paid commissions, she has been the recipient of many grants, including two from the N.J. State Council on the Arts, and one from the National Endowment for the Arts.

Most of the students in the recent Tuesday in the Park workshops were painting representationally, but that is not a requirement; neither is the use of oil paints. A few people were working in acrylics, although it was obvious that Graupe-Pillard prefers oils — that is her medium, along with a computer and Photoshop software.

Phyllis Rosser is another student who has seen public success since she began studying with Graupe-Pillard 11 years ago in Tatum Park. Rosser, who lived in Holmdel at the time, moved to New York City five years ago and now commutes to the Tuesday class.

"I went through the usual problem of trying to get into a class because they were all full," Rosser said. "Once I started, I knew it was the right place for me. I could easily go to Cooper Union or the New School because they are near where I live in Chelsea, but I like Grace as a teacher."

Rosser, who was creating found wood sculptures at the time she joined, now paints close-up flower portraits. She said of Graupe-Pillard: "She is very accepting of whatever your style is. A lot of teachers want you to paint the way they do. Grace creates a very positive environment. Everyone is very encouraging of each other. That’s because of Grace. She discourages negative criticism. She make people feel good about themselves."

Carlyle, who uses acrylics, agreed. "Grace has an incredible ability to see what would improve a painting."

Graupe-Pillard squinted as she walked from canvas to canvas, and reminded the artists to squint while looking at their own work so that they could see the shapes within the canvas better. She also encouraged them to stand back and get the big picture.

Liu said that, over the years, she has seen Graupe-Pillard’s students progress.

"Whether the student is a novice or a seasoned artist, Grace is patient with bringing out the best in those who want to learn. In spite of Grace’s fame regionally and nationally, she is simply a great, down-to-earth person who is modest and humble."

Graupe-Pillard may be modest and humble, but her canvases are not. They are large, brilliant and disturbing. They charge you to look deeply at the world around you. She plumbs the depth of her imagination and experience, and then rises to the surface to breathe expressiveness into her students.