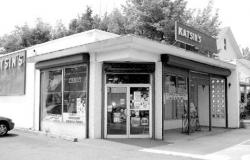 GLORIA STRAVELLI Katsin’s pharmacy, a west-side fixture for 70 years, has ceased its pharmaceutical services at 192 Shrewsbury Ave. and transferred them to the Rite Aid down the street.

REDBANK — Katsin’s, the last drug store on the borough’s west side, closed its pharmacy operation last week after 86 years in Red Bank, 70 of those on the west side.

Owners of the pharmacy at 192 Shrewsbury Ave. sold Katsin’s pharmacy business to national drugstore chain Rite Aid. Katsin’s will continue to be operated by Pharmco Enterprises Inc., Linden, as a convenience store.

"All of Katsin’s records have been transferred to the Rite Aid at 596 Shrewsbury Ave. in Tinton Falls as of July 1 — their prescription department has merged with Rite Aid," explained Dominick Grimaldi, area supervisor for Rite Aid.

On Friday, phone calls to Katsin’s pharmacy automatically rolled over to the Shrewsbury Avenue location, which is 1.7 miles south.

Customers who opt for the Rite Aid store in the City Centre Plaza on Wall Street in Red Bank can do so, Grimaldi said, because computer records for prescriptions can be accessed from any Rite Aid location. The chain operates 3,400 stores nationwide, more than 180 in New Jersey.

In fact, customers will still find Katsin’s head pharmacist Larry Braun behind the counter at Rite Aid, where he is now working. Unlike Katsin’s, however, Rite Aid does not offer delivery service or store charge accounts.

"It was a business decision. We probably should have gotten out of the pharmacy business a long time ago," said Mark Cutinello, president of Pharmco, which has owned Katsin’s since 1991. "We kept it because of the community, but at this point we’re filling prescriptions at a loss."

"I just went to Katsin’s to get a prescription filled, only to find out I had to travel a half-mile to get it filled," west side resident Amy Goldsmith said Tuesday.

Goldsmith, Locust Avenue, needed prescriptions filled for her child and her husband, both of whom were ill.

"I just brought my child home from the doctor and I couldn’t just go to Katsin’s, which is three to four blocks from my house," she said. "I had to get in the car and go to Rite Aid."

According to Cutinello, a shortage of pharmacists, low rates of reimbursement from health insurance companies and competition from drug store chains have changed the face of the pharmacy industry, and led to the decision — an industry trend — to sell Katsin’s pharmacy operation.

Letters dated July 1 were sent to Katsin’s customers informing them of the sale to Rite Aid. The letter apologized for any inconvenience caused by the changes and asked customers to pay store charge accounts in full.

"Katsin’s will continue to be open to service the community as a convenience store," said the letter signed by Cutinello, who also is president of Rita Pharmacy Inc., Linden, parent company of Pharmco. Rita Pharmacy also operates a pharmacy in Roselle Park.

Katsin’s will continue to offer services including Western Union money transfers and money orders, Western Union Convenience Pay, New Jersey Lottery and an ATM. Cutinello said the store’s inventory of groceries, cards and gifts, and health and beauty aids will be expanded. Last week, he said he was searching for ideas for the space formerly occupied by the pharmacy department and offices.

"When I got out of the U.S. Navy in 1946 there were 13 pharmacies in Red Bank, now you can see what’s left," said Charles Katsin, son of Bernard Katsin, founder of Katsin’s Drug Store. "It’s unfortunate because the west side of Red Bank could use it."

According to Katsin, who went to work as a pharmacist at Katsin’s in 1946, Bernard Katsin founded Katsin’s Drug Store in 1918 on Monmouth Street near the Red Bank Train Station. Katsin soon had three other locations on Broad Street plus a fourth, Katsin & Green, operated with a partner.

In 1934, the elder Katsin moved the drug store from the corner of Wallace and Broad streets to Shrewsbury Avenue, across the street from its present location. At the time, it was the third pharmacy on that stretch. Charles Katsin moved the store across the avenue in 1965 and worked there as a pharmacist until his retirement in 1991.

"People used to come from all over the county because we stocked things that others didn’t," Katsin recalled. "People came from all over because there weren’t pharmacies in Colts Neck and Freehold, and we did a lot of farm business.

"We sold most of the vaccines to physicians around the area. When the hospital first opened, it was a wooden house and my father supplied them with medications, oxygen."

"The whole complexion of the industry has changed," noted Katsin, Rumson. "It was the last bastion, a pharmacy is an all-together different thing today. For instance, the local pharmacist doesn’t compound medicines," explained Katsin, who remembers making syrups for the drug store’s soda fountain.

In addition to other factors, the upcoming retirement of Cutinello’s father, Marco Cutinello, a pharmacist at Katsin’s, and the retirement of another long-time pharmacist left Pharmco with a succession problem it could not remedy.

Cutinello said an independent pharmacy like Katsin’s can’t compete for pharmacists, nor can it pay current salaries in the field. Chains and research facilities are attractive employers, offering pharmacists 9-to-5 jobs, benefits and hefty sign-on bonuses, he said.

With pharmacists commanding $66-68 per hour plus benefits, pharmacies must pump up volume to offset overhead to try to remain in business, he added.

While Katsin’s made a profit in the last quarter, the store would have had to fill more than 100 prescriptions per day to remain profitable, he explained. With three pharmacies to run, Cutinello said the decision was made to sell Katsin’s, the most remote geographically and the least profitable of the Rita Pharmacy locations.

"We would have preferred to bring in a pharmacist/part owner. We ran ads but didn’t find what we were looking for," he explained. "We could have stayed here and fought this battle, but we would have lost the battle."

Cutinello said customers will still be able to get help with prescriptions at Katsin’s.

"If somebody comes in, we will call over there and fax over the prescription so it will be ready when they get there. We’ll do everything we can to continue to provide them with service," he said.

Mary Nicosia, director of the Parker Family Health Clinic, said the closing of Katsin’s wouldn’t present a problem for patients who could go to other area pharmacies.

"We’re advising patients to go to the Rite Aid on Wall Street or Shrewsbury Avenue, the pharmacy at Foodtown and, in Long Branch, the Homestead Pharmacy," she said Tuesday.

Residents can also access the pharmacy at Stop & Shop on Route 520.

But Goldsmith, who is president of the West Side Community Group, said she is concerned about the alternatives available to residents who walked to Katsin’s.