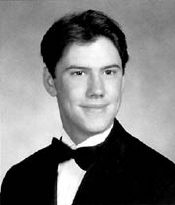 MIDDLETOWN — The short life of Middletown resident Dennis J. "D.J." Wheeler, 18, killed in a one-car accident Nov. 21, is being remembered with a make-shift memorial at the site of the crash.

Loving messages scrawled on a tree, flowers, candles and notes on the roadway stand as stark reminders of the accident on Middletown-Lincroft Road nearly two weeks ago that claimed the life of the 2003 High School South graduate and Brookdale Community College student.

Wheeler died after he was ejected from a Honda SUV, driven by Joseph Baccellieri, 18, Middletown, when the vehicle veered off Middletown-Lincroft Road in the early morning of Nov. 21.

Baccellieri was driving north on Middletown-Lincroft Road, with four passengers, just after midnight, to visit a local friend, police said. 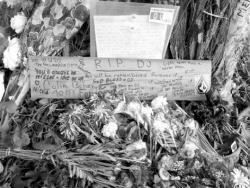 "Based upon the investigation thus far, sometime prior to the Molzon Landscape Nursery, the driver (Baccellieri) came upon a gradual curve in the road and lost control of the car," township Patrolman James Roese said.

At that point, Baccellieri’s vehicle crossed the double yellow line and headed northbound in the southbound lane.

"The vehicle went up a 2 1/2-foot elevation and hit a tree with the left rear driver’s side door, Roese said. "As the vehicle was hitting the tree, it started to pivot around the tree. That was when Wheeler, who was in the back seat with no seat belt on, was ejected."

While all the vehicle was pivoting and people were being ejected, Wheeler was still pinned underneath it, according to police reports. 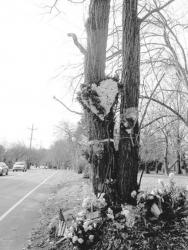 ELAINE VAN DEVELDE A tree at the edge of Middletown-Lincroft Road marks the spot of a memorial to Middletown resident Dennis J. Wheeler who was killed at the site Nov. 21 in a car accident.

Joseph Provine, 19, Middletown, who was also a back seat passenger in the vehicle, was ejected from the SUV as it rotated about 180 degrees around the tree. He was thrown about 40 feet into the road, Roese said.

"He (Provine) rolled down to the front of a driveway at 220 Middletown-Lincroft Road," the patrolman said. "Then another rear passenger, John Pattwell, 19 (of Middletown), was ejected through the rear right passenger-side door."

When the car came to a final stop, just missing Provine (laying in front of 220 Middletown-Lincroft Road), "it had unfortunately taken Wheeler for the ride (underneath) — it landed on top of him," Roese said.

Lincroft and Leonardo fire companies arrived at the scene along with police and first aid squads, Roese said. Leonardo Fire Company members jacked the car up to free Wheeler.

He was transported to Jersey Shore University Hospital, Neptune, where he was pronounced dead shortly after.

Provine was taken to Riverview Medical Center, Red Bank, where he was treated for bruising and released. Pattwell was also treated and released from Riverview.

Baccellieri and a juvenile passenger in the front seat were both wearing seat belts at the time of the accident.

"We will never forget," reads one message penned on a road stripe at the scene of the Nov. 21 fatality. Still, the cause of the accident which claimed the life of 18-year-old Middletown resident and Brookdale Community College student, Dennis J. Wheeler, D.J., has not yet been determined.

The accident is still under investigation by the township police, investigators from the Monmouth County Prosecutor’s Office and the county Serious Collision Accident Reconstruction Team (SCART). SCART is comprised of police officers from throughout the county.

Results of tests to determine the vehicle’s speed at the time of the accident as well as drug and alcohol screenings are pending, Roese said. Answers are still sought.

Roese asked that anyone with information about the accident should call him at the police Traffic Bureau at 732-615-2047.