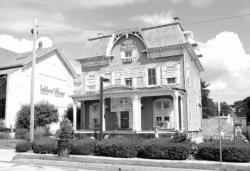 CHRIS KELLY The Century House sits at its new location on Oakland Street where it will be used by the Red Bank Charter School.

RED BANK — Two period buildings stand side by side on Oakland Street, poised to begin a new life as the Red Bank Charter School campus.

"The Century House is in place now, 26 feet away from the Oakland Street School," said Ned Gaunt, principal in Kaplan Gaunt DeSantis, which has designed the new campus.

Creating an environment for learning and a design to bridge the different styles of the 138-year-old Century House and the circa 1920s Oakland Street School (most recently the Oakland Street Restaurant) was the challenge faced by the Red Bank architectural firm.

"We’ve done a lot of retrofitting of old buildings; this one is unique because we’re putting two buildings together — one that was in place and one that was moved there — with a link. It’s a real challenge," acknowledged Gaunt.

"The challenge was to tie the two buildings together architecturally with compatibility. They do come from two different time periods, and they look quite a bit different."

While providing for preservation of the two vintage buildings, the design had to include nine classrooms for the charter school’s 162 students, as well as rooms for art, science and computers, Gaunt added.

"We also knew we needed some offices, and they wanted a multipurpose room, plus a teachers’ room, and rooms for child study and basic skills had to be fit in somewhere," he said. "We tried to work with the structural system and minimize the cost of the alterations."

The firm worked within a budget of $2.5 million to cover the cost of a new foundation for the Century House (which was moved to Oakland Street in May from its original location on West Front Street), renovations to both structures, and construction of the linking structure.

That figure does not include the cost of purchasing the Oakland House building, which was assessed at $1.2 million, or the move of the Second Empire-style Century House, which cost $220,000, according to Michael Stasi, chairman of the charter school’s board of trustees.

He said it will take another $200,000 for the foundation, design work and renovations necessary to preserve the Century House, which is eligible for inclusion on the National Register of Historic Places, as part of the charter school campus.

Stasi said about $30,000 has been raised to date toward the cost of the preservation work and new construction necessary to create the new campus.

The Red Bank Charter School has secured $2.5 million in a low-interest, 25-year loan from the New Jersey Economic Development Authority, he said.

The historic structures — the three-story, 15,000-square-foot Oakland Street School and the four-level, 5,200-square-foot Century House — plus the two-story, 1,200-square-foot link, will provide a total of 21,000 square feet of space for the charter school campus.

According to Gaunt, on a square-foot basis, the link will be the most expensive component and the Oakland Street School the more expensive to renovate. Patock Construction, Tinton Falls, is the general contractor.

Gaunt said the campus design will be implemented in phases, with the first phase, renovating the Century House for use by grades K-3, scheduled to be completed for the start of the school year in September.

Easily the most challenging part of the design was creating a functional structure that could link the two dissimi­lar buildings.

The two-story link will be 26 feet wide, 48 feet long and set back 12 feet from the front of the buildings.

Since floor level of the Oakland Street School is 4 feet above finished grade, project architect William Her­chakowski set the Century House at the same level. The link between the two buildings will be set 4 feet lower, at grade level, to provide barrier-free ac­cessibility.

Architects designed a connecting structure with a stucco finish and ele­ments of trim borrowed from both the Century House and Oakland Street School.

"It’s a transitional link that really ties the two buildings together," he said of the structure that will provide the main entry to the campus.

A raised, gallery-type open hallway will run through the link and connect the two school buildings. The link will house administrative offices and provide access to a patio and playground area at the rear of the site.

A stairway and a lift for individuals with disabilities will provide access to the main level.

The exteriors of both the Oakland Street School and the Century House are not original and will remain un­changed, Gaunt said, due largely to budgetary limitations.

Used as a school until the mid-1970s, the Oakland Street School originally was a red brick building, but its facade was covered in stucco when it was con­verted to a restaurant and classroom windows were filled in. Gaunt said available funds can’t be stretched to cover the cost of exposing the red brick, and it will remain stucco.

The vinyl siding covering the original exterior on the Century House will also remain, he said.

The Century House was owned by Meridian Health which leased it to the charter school last fall for use by grades K-3. The historic house had been slated for demolition to accommodate an ex­pansion by Meridian affiliate Riverview Medical Center, Front Street.

With the charter school as a prime mover, the Coalition to Save the Cen­tury House was formed with the support of Preservation Red Bank and Riverview. Meridian Health transferred ownership of the house to the charter school with the proviso that it be moved.

The move to its present location at 58 Oakland St. began in May when the historic structure was transported through downtown Red Bank and placed temporarily on an adjoining property on Monmouth Street. After the closing of the Oakland House Restaurant, the house was moved into place on the Oak­land Street site and a 10-foot-deep foun­dation constructed. That space will be used as a music room by the charter school.

Gaunt said the only addition to the Century House will be an enclosed stairwell that will be built onto the back of the structure. Renovations to the inte­rior will be minimal.

Renovations on the Oakland Street School will be more extensive, he said, including addition of a one-story, 2,600-square-foot multipurpose room that will serve as a cafetorium and gymnasium.

The two-story linking structure will connect to the Century House on the lower level.

Gaunt said both buildings have intact sprinkler systems, as well as adequate electrical service. While the Century House has heating and air-conditioning units, the systems need to be replaced at the Oakland Street School building, he said.

The site plan, approved by the Red Bank Planning Board, provides for eight parking spaces on-site to the east of the Century House. Arrangements for addi­tional parking have been made with a neighboring manufacturing facility.

According to Stasi, a fund-raising gala to support the capital campaign is planned for the fall.

In addition, donations can be sent to the Red Bank Charter School Founda­tion at 65 W. Front St., Red Bank 07701. Donations can be earmarked for specific preservation measures, he said.