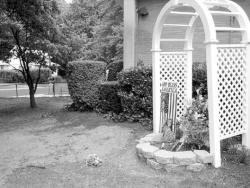 ELAINE VAN DEVELDE A 51/2-foot-tall statue of the Virgin Mary that stood underneath this arbor at St. Catherine’s was allegedly beheaded by teen vandals July 19. The desecrated statue was buried next to the arbor July 22 as part of a Catholic ceremony for disposing of sacred objects.

MIDDLETOWN — With the arrest of five local teens in connection with a bias-crime spree last week, police say they have uncovered the seeds of a grassroots neo-Nazi group.

Authorities also said they are not surprised that of the five teens arrested, three were females.

Two 14-year-old boys and three girls, two ages 15 and one age 16, were ar­rested by Middletown police in the early morning hours of July 22, following two separate incidents of vandalism the pre­vious weekend at and around St. Catherine’s Roman Catholic Church, Shore Acres Avenue in the North Middletown section of the township.

The boys were charged with criminal mischief, desecration of a venerated ob­ject, bias intimidation and conspiracy.

The girls were charged with 22 sepa­rate counts each, including multiple counts of criminal mischief, desecration of venerated objects, bias intimidation, and conspiracy to commit acts of bias intimidation.

A police investigation of the inci­dents resulted in all five teens being brought into the Middletown police de­tective bureau for questioning at about 7:30 p.m. July 21.

The boys were allegedly responsible for the decapitation of a 51/2-foot-tall statue of the Virgin Mary, located on church property, July 19, authorities said. The statue’s head was found at Roosevelt Park, a few blocks away.

"When that incident came to light, we initially thought it was just criminal mischief," Middletown police Detective Jeffrey Barner said. "It was after the in­cident involving the girls was reported that we realized there was a connection and it may be bias-related."

The girls allegedly broke into the van of a local house painter who parked his vehicle in the church lot. After allegedly stealing the paint from the van, they wrote various obscenities and hate mes­sages on church property, area streets, fences, and other personal and public property in a four-block radius. The writ­ings denigrated Jews, Catholics, Blacks, Puerto Ricans and people the girls knew personally.

"You name it, they covered it," Monmouth County Prosecutor John Kaye said at a press conference held in his Freehold Borough office Friday.

"The thing that makes this signifi­cant and this case unusual is that when the police obtained a search warrant for one of the boys’ homes [the stepbrother of the 16-year-old girl], they found ma­terials that showed these incidents were [connected bias incidents] organized by a group called the Agnostic Neo-Nazis," Kaye said. He said the group appeared to be the brainchild of one of the boys.

One of the boys and all of the girls are students at Middletown High School North.

The other boy attends a special school in Piscataway, Kaye said.

While punishment for the crimes has not been decided, the prosecutor said, "Whenever there is a bias intimidation case, the prosecutor’s office has always sought jail time, and we will do that with this case. Our statute permits the court to have jurisdiction over the par­ents."

Because the crimes had a bias intim­idation connection, authorities will seek jail time at a juvenile facility, as well as counseling, community service, and education in Holocaust studies, Kaye said.

"We had to determine whether or not bias intimidation was a factor before the charges were lodged," Barner said. "Sometimes when it involves juveniles, there is no intent to intimidate. Rather, the kids are ignorantly mimicking some­thing unintentionally and don’t realize what it means. Mostly with kids, of­fenses are confined to criminal mischief and bias-related graffiti."

Because of the intent to intimidate certain groups in this case, the teens were charged with bias intimidation, Kaye said.

The five teens were released to their parents’ custody.

Middletown Police Chief John Pollinger said, "Intolerance, hatred and bigotry will not be stood for in Middletown Township."

Police would not release the names of the juveniles involved in the inci­dents because of their ages.

Right now, the three girls and two boys are sus­pected to be members of a local neo-Nazi organization, but police and the Prosecutor’s Office are still investigating whether there is a connection to an­other, larger group and how many members might belong to the Middletown group.

"This was definitely a home-grown group," Kaye said. "In our research we found lots of American Neo-Nazis, but this appears to be the only Agnostic Neo-Nazi organization. Apparently the American Neo-Nazis are all over the place."

Three composition books, allegedly prepared by the boys, were seized, Kaye said. The books contained membership criteria and plans for a race war to elim­inate just about every race except Caucasian, he said.

There was also information in the books about a rough design of a group symbol to be worn as a tattoo and about spe­cial rings that were to be obtained as part of membership.

Authorities seized computers from the teens’ homes and planned to comb them for connections to other groups and Internet sites that would help the police in their investigation.

Other than that, "the books contained just about every piece of hate imagin­able, spelled out — or misspelled, I might add," Kaye said.

In one instance of graffiti, Pollinger said, one of the girls allegedly defaced property with a misspelled spray-painted racial epithet. Another girl allegedly rewrote the misspelled epithet in spray paint and pointed "out the misspelling by painting an arrow to the misspelled term. "This sort of reinforcement is common not only in such an organiza­tion, but with juveniles especially. They reinforce each other’s behavior, and it spins out of control."

This is why kids do not live on their own, Pollinger said. "No child living in any house should be above the scrutiny of their parents. Be nosy, parents. You have to love your kids enough to keep a close watch on them. Kids can be easily influenced and led astray."

The real problem, Pollinger said, is that, male or female, one hateful person empowers the next.

"Who better to blame the ills of the world on than someone other than your­self?" he said.