Skip to content
Captain has been
acting head of Police Dept. since January
By sandi carpello
Staff Writer 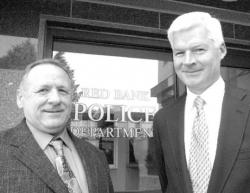 CHRIS KELLY Red Bank Police Capts. Ernie Van Pelt (l) and Mark Fitzgerald were expected to be sworn in July 31 as deputy chief of police and chief of police, respectively.

"I think every police officer aspires to that position," he said.

Fitzgerald’s dreams were slated to become reality yesterday at 5 p.m., when he was to be sworn in as Red Bank’s new chief of police.

At that time, Capt. Ernest Van Pelt, 59, a 34-year veteran of the department also will be sworn in as the Deputy Chief of Police.

Fitzgerald, 50, a 28-year member of the Red Bank Police Department, has been serving as acting police chief since the retirement of former Chief James Clayton in January.

A graduate of St. James Elementary School, Red Bank Catholic High School, The College of New Jersey’s Criminal Justice program, and Northwestern University’s Traffic Institute, Fitzgerald joined the Red Bank department in 1975, was promoted to police detective in 1985, to sergeant in 1990, to lieutenant in 1992, and upped to captain in 1998.

He has represented the department as their Megan’s Law officer, training officer, forfeiture officer, and public information officer.

Recently, Fitzgerald aided in the establishment of the borough’s Domestic Violence Crisis Intervention Team — a program that aids and assists victims of domestic violence.

Rising through the department ranks, Van Pelt was promoted to sergeant in 1987, lieutenant in 1991, and captain in 1996.

Van Pelt is married to Mary Beth Van Pelt, and has one daughter, Kim­berly, 17.