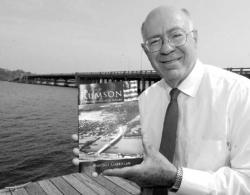 JEFF GRANIT At the Rumson side of the Oceanic Bridge, Randall Gabrielan holds a copy of his recently released book, Rumson: Shaping a Superlative Suburb.

With its tall windows open to the sweltering summer evening, Rumson’s staid Bingham Hall last week provided a proper setting for the first public look at a new volume on the history of the town commonly known as "The Borough Beautiful."

"Rumson has a mix of estates that have been destroyed and those that have been saved," Randall Gabrielan told a group of residents assembled in the 150-year-old hall for a program on his new book, Rumson: Shaping a Superlative Suburb.

Recently released by Arcadia Publishing, the 160-page, softcover book is the 30th Gabrielan has written for Arcadia, which focuses on books about local history.

With 29 titles (from Allentown to Tinton Falls) written for Arcadia’s pictorial Images of America series including Rumson Vols. I & II, Rumson: Shaping a Superlative Suburb is Gabrielan’s first in Arcadia’s new Making of America series.

The new series reverses the Images formula, featuring a substantial narrative text illustrated by archival photos — in the case of Gabrielan’s newest volume more than 100 vintage images, many unpublished — of Rumson’s great estate homes and other structures.

Sponsored by the Rumson Historical Society, the June 26 lecture and slide presentation gave residents who attended an overview of the development of their town, from the mid-17th century to the present day.

Executive director of the Monmouth County Historical Commission and president of the Middletown Historical Society, Gabrielan said in an interview his latest volume on Rumson presented a different challenge than the two earlier books, which were largely pictorial.

"This one was much more satisfying and much more challenging," he explained. "The big challenge in this book was finding out detailed information about some important sections that were scantily covered or not at all in the picture histories, the Navesink River Shore for example."

While the format allowed for more text, Gabrielan was still constricted by the publisher’s formula and constrained by the fact that he’d already written two volumes on Rumson.

"I had to choose what I wrote about, and the publisher was surprised at first, calling the book an ‘architectural depiction,’ " he said. "But I take pride in that criticism because houses and estates and architecture are what make Rumson extraordinary.

"I think people will buy this book because there is a great interest and curiosity about these houses and the people that built them," said Gabrielan, whose volume is available locally at Rumson Pharmacy and Fair Haven Books.

Gabrielan’s meticulous research illuminates Rumson’s legacy of land barons, family histories, sprawling estates, architectural modifications to some of the grand residences, and the more recent trend to subdivision of properties. Societal and cultural influences that shaped the borough are explored and plenty of local color is served up, including the story of an oddball resident who erected a wall around his River Road property on which he painted social commentary.

Rumson: Shaping a Superlative Suburb — the title is Gabrielan’s — begins around 1665 with the area’s settling shortly after Monmouth County was established. Before that time, the land was populated by Lenape Indians, who gave the area its name, a derivative of their Navarumsunk.

Attractive due to its proximity to New York and access to water transport, the area then known as Passage Point or Black Point, occupied a peninsula formed by the Navesink and Shrewsbury rivers and became a port, business center and social center, he explains.

Among the influential settlers mentioned in Gabrielan’s book is William Bingham, whom he identifies as the area’s most important 18th-century figure. A leading Philadelphia banker and financier who aided the Revolutionary cause, Bingham established a country retreat on 200 acres of Black Point farmland that became known as Bingham Hill. According to the author, Bingham built Monmouth County’s first country retreat there at 139 Bingham Ave.

Another pivotal figure in Rumson history cited in the book is Thomas Hunt, who purchased a 177-acre river-to-river tract in the Oceanic section. In 1845, Hunt ushered in a new era when he opened the Pavilion Hotel, establishing Rumson as a resort that became a destination for steamboats carrying guests from the city to the Shore for more than a century.

According to Gabrielan, most of Rumson’s spiritual, social and community organizations originated in the Oceanic section, whose residents led the campaign to make Rumson a borough in 1907.

Another landmark in Rumson’s development was the building of the first Rumson-Sea Bright Bridge circa 1870, Gabrielan noted in an interview.

"The principal traffic in the area was coming along the ocean shore on a railroad which was connected to the city via steamship," he explained. "The rail line went to Sandy Hook and down the shore to Long Branch. Once the bridge connected Sea Bright to Rumson, it was easy to get off the train, cross the bridge, and this beautiful peninsula with a different character than the rather narrow shore was open."

Chapters of the book are rich with details about the course of Rumson history, including development east and west of Oceanic Village where, Gabrielan writes, "over a century-and-a-half of Rumson history is represented in the estates on the Navesink River," as well as the area surrounding the Shrewsbury Bridge and Bluff.

In a chapter titled "The Origin of the Great Estates," Gabrielan describes a late-19th century "back to the land" movement by wealthy industrialists and financiers that shaped Rumson. He discusses other structures as well, including Rumson churches Holy Cross and St. George’s-by-the-River, the Seabright Lawn Tennis and Cricket Club, the Seabright Beach Club and the Rumson Country Club.

A separate chapter is devoted to "The McCarter Circle," the family of the builder of Rumson Hill, which Gabrielan terms "the borough’s greatest estate."

"From the Depression to the Future," the book’s final chapter, details the influence of the Depression and World War II and the post-war trend to suburbanization that swallowed up all but one of Rumson’s large farm estates through building subdivision and redevelopment.

The borough’s attractiveness has led to development of virtually every buildable acre and a new land use pattern has emerged, Gabrielan noted.

In "a land-scarce town," he said, the present trend is demolition of structures that still have useful lives and replacement with larger dwellings. Evidence of the trend is the fact that demolition permits went from seven in 1997 to 30 in 2002, he added.

Subdivision isn’t necessarily a bad thing, according to Gabrielan, since the financial and staffing resources required to maintain estate properties are, in many cases, no longer feasible.

In fact, he said, to an extent the changes, when done with respect for historic preservation, are beneficial since they help derive maximum use of large tracts and enhance their value.

The question of which structures to preserve and the effect of teardowns on the landscape are issues that will affect the borough’s history in the 21st century, he cautions.

"In fact, the town has become so desirable a destination," Gabrielan noted, "its greatest challenge at the dawn of the 21st century may be dealing with an excess of success."