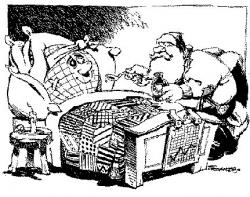 It was an outstanding week for Brick, with accolades blanketing the township’s reputation like Thursday’s snow.

In New Jersey, only the much smaller borough of Allenhurst was placed alongside Brick in Cape May to Montauk: A Coastal Protection Report Card. Out of 66 towns that responded to the study, only six were rated "outstanding."

A look at the score key for Brick showed that the work of the Brick Township Municipal Utilities Authority (BTMUA) played a huge part in the outstanding rating. Of Brick’s 59 total points (50 or above was outstanding), water quality accounted for 26.

What makes that statistic most impressive is that Brick dwarfed other towns with much smaller water-supply demands and housing densities and higher comparative household incomes. Once again, the progressive BTMUA has proved itself to be a step ahead of the pack.

It also helped that the BTMUA has willing partners in Brick’s administration and past and current township councils that have made it their mission to protect the Metedeconk Watershed through an aggressive open space acquisition program.

But the majority of coastal New Jersey towns came away with disappointing marks, especially in the area of land use agencies.

According to the report, "They issue permits with such lenience that the practice has become a mere formality."

That statement perfectly pegs the feelings of so many in the Shore area who are disgusted with the rate of development in their neighborhoods. Every year, promises made during the election seem to fade as the same disappointing excuses are given that nothing can be done and that quasi-judicial boards can’t stop blockbuster developments from springing up in residents’ back yards. There are ways out there, and they need to be found.

More good news came to Brick in the form of the annual Morgan Quitno "City Crime Rankings," which named the township the second-safest city with a population over 75,000.

A ranking like this starts at the community level, where Brick’s residents have successfully kept a big town small.

By doing their part in each home on each block, Brick has created an environment where the police can patrol the streets with the greatest success.

Honors like these go further than creating mere bragging rights. Like towns with histories of passing school budgets, Brick’s successes in the environmental and safety arenas will be major selling points for the township and make residents’ properties more valuable.