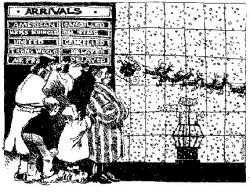 With little discussion and no public feedback, the Township Council passed an ordinance on first reading last week designed in part to break up unruly crowds of teens around places like the Loews Cineplex in the Brick Plaza.

He said the proposed ordinance was a tool that law enforcement officers could use to end such problems.

According to the proposed ordinance, "No person shall remain idle or lounge or loiter or sleep in or upon any public street, sidewalk, highway, road, alley or other public place. … No person shall be found guilty of so remaining idle if he establishes that he had a legitimate purpose in so doing.

"No person shall go about from door to door or place himself in or upon any public street, road, avenue, beach, parkway…to beg or gather alms. No person shall be found guilty if he establishes that he has obtained a license…"

The ordinance bears some resemblance to the measures once taken by Mayor Rudy Giuliani in New York City to rid the streets of panhandlers, squeegee men and the homeless.

Giuliani said in a 1993 campaign speech, "When a panhandler uses intimidation in order to ask for money and instills in the victim a reasonable fear of bodily harm, that is assault."

Kavanagh’s remarks bore more than a passing resemblance to Giuliani’s.

In New York, where violent crime once ran rampant enough to drive away residents, business and tourists, the measures were undeniably successful in reducing crime.

But this is Brick, and the problem here is little more than an annoyance. The proposed ordinance seems like overkill.

The ordinance is worded in a vague way that would seem to leave its interpretation at the discretion of each individual police officer.

Can lounging on the waterfront be construed as a violation? Could someone deemed as remaining idle without a legitimate purpose be searched?

The council needs to consider several specific possibilities with this ordinance before it passes.

The ordinance could become a point of tension between police officers and the community.

Those deemed in violation, either unaware of the new ordinance or in disbelief, will inevitably respond that they "know their rights" and rebel, aggravating officers and leading to an inflamed situation.

Teens will in turn complain to their parents, who in many cases will have to pay any resulting fines and court costs.

Someone may eventually file a challenge; similar anti-loitering laws have a history of being overturned in the courts.

What is worrisome about this ordinance, in its current wording, is that the chance clearly exists for those minding their own business to be suspected or even charged with a crime.