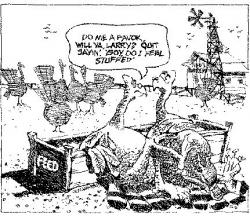 America was a nation at war when President Abraham Lincoln proclaimed the last Thursday of each November a national day for thanksgiving in 1864.

Fighting a Confederate army whose cause, historians believe, was probably doomed logistically from the start, Ulysses S. Grant’s Union troops were dug deep in the trenches of Petersburg, Va., that night. Union cooks reportedly served an estimated 120,000 chicken and turkey dinners to their troops.

In Georgia, forces commanded by William Tecumseh Sherman, engaged in total war, lived off the land, and scavenged food where they could. That night, a gaunt and starving group of Union escapees from the infamous Confederate military prison in Andersonville wandered into Sherman’s camp.

While Confederate soldiers who were camped near Grant in Petersburg did not partake in the Thanksgiving celebration, they temporarily ceased their hostilities out of respect for their adversaries.

It’s a safe bet that America’s modern terrorist enemies would not extend the same courtesies, but for now, even with a military operation against Iraq looming on the horizon, we are enjoying a moment of peace.

To that end, we hope that you will enjoy this Thanksgiving and holiday season for all it is worth.

Take your kids to a community event like Brick’s fourth annual holiday show, Saturday’s tree lighting at Windward Beach Park, or Monday’s menorah lighting at town hall. Catch up with old friends who are back in town at the pub around the corner. Spend some quality time with a family member you rarely have the opportunity to see these days, because, like our Civil War-era forebears who began the Thanksgiving tradition, the calamities of our time have taught us lessons in how valuable our peace is.