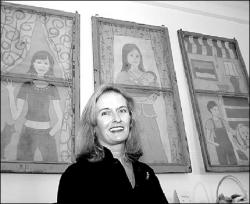 CHRIS KELLY The use of color in the works of Megan Gilhool reflects the spiritual turn her art has taken. Gilhool, of North Long Branch, recently opened gallery space in Point Pleasant Beach.

Megan Gilhool points to her 9/11 painting "Healing Hearts," showing nine red heart-shaped flowers in a blue vase with white stars on it, as a prime example of the spiritualism her painting has moved into in its latest metamorphosis.

The nine flowers are for the nines tables in math which keep coming up with nine, the most powerful number, she explained, and the red, white and blue of the flowers and vase are a tribute to the patriotism the country has expressed since the terrorist attacks of Sept. 11, 2001. The vase is grounded in green, which stands for healing, she said, while the backdrop of yellow stands for intellect.

"The red (matting) that surrounds it signifies power," she added.

Gilhool, a native of Monmouth Beach who now lives in North Long Branch, has prided herself on her art constantly evolving and growing throughout a lifetime of being a captive of it. A self-taught artist, she recalled doodling since early childhood.

"I had to do it. It wasn’t something I had a choice," she said of being an artist.

Gilhool, who has worked full time as an artist for the past 10 years, is just now opening her first permanent gallery space in Point Pleasant Beach at Canvas House Antiques & Design Center, 614 Trenton Ave.

Her 16-by-20-inch "Healing Hearts" painting, offered at $1,550, was the most expensive by far of Gilhool’s art work on exhibit in the just-closed show at the Monmouth Beach Cultural Center. Her other pieces ranged down from $785 to $95 for original paintings, to $45 for prints and $10 for notecards and Christmas cards.

In addition to paintings, Gilhool does murals for homes and businesses and paints cars for herself.

Her work includes a mural of the New York skyline inside Donovan’s Reef bar in Sea Bright and seasonal paintings on the window of Fair Haven Hardware — summer, fall, winter and spring. Both underwent rework after the events of 9/11.

Gilhool said Donovan’s Reef was named after one of John Wayne’s movies — a bad one, she said — so she painted a mural across two walls of the New York skyline with John Wayne in a biplane, which was going right toward the World Trade Center. After the terrorist attacks, she moved in swiftly to take the plane out and paint over it with a waving American flag. At the other end of the mural, where two palm trees stood on a beach, she painted a banner between them saying "God Bless America."

"I never took down the World Trade Center. That will be left up forever," she said.

At Fair Haven Hardware, she added, she replaced the seasonal scene with an American flag.

Her most prominent statement on 9/11, however, may be her own car — a Buick Electra station wagon — that she painted as an American flag.

This is a serious car, as opposed to her previous car, dubbed the "Cheetahmobile."

Gilhool said she painted up her previous car to look like a cheetah because it was "all rusty" and she wanted to cover up the rust.

"It had teeth on the front, a little nose on the hood," she said. "It had claws that went around. I tied them so that when the car was going slow, if you looked at it from the side, it would go around (like the cheetah was running). It had a windshield wiper on the back window, so I sewed and stuffed a tail and the tail would wag. Kids would chase me down the street with that car."

She had other plans for her present car before 9/11. She said she was going to do it in concert with Clean Ocean Action in an undersea theme.

"But when 9/11 happened, the plan just changed," she said, and she went for the flag motif.

Asked how much of a defining moment 9/11 was for her, Gilhool replied: "You have a responsibility as an artist. Whatever you put out there, you have to think about how it’s going to affect other people. This is what I do. I can’t go over and fight wars. I can’t sew somebody up. I can only deal through color and beauty."

Gilhool bills herself as working in mixed media. When asked to explain which she uses, she said she works in water colors, acrylics and oil paint. Her works on display at the Monmouth Beach Cultural Center included three large screens, found in a shed in back of her house when she and husband Michael moved in. She said she painted them in oil enamel.

Painting screens was big in Baltimore in years gone by, Gilhool said. But, she said, screens painted there tended to have sailboats or country scenes on them. She said the writing on the three screens she found on her property dictated what went on them.

"They had to be the way they are because of what was said on the bottom," she related. "One said ‘mother’ in the middle, so it had to be a mother and child. Another one says Roman numeral XII and the other has the Roman numeral IV, so they became the 12-year-old girl and the 4-year-old boy,"

To make room to paint, Gilhool threw away all of the furniture in her house.

"I was going to paint in the basement, which is just not a really good place to paint. I could never make myself go down there," she explained. "So I said I’m going to get rid of all the furniture. I dragged it out to the curb. I ripped up the carpeting and painted everything white. I went to garage sales and bought track lighting and a floor lamp. It’s pretty comfy there."

"Thank God, Michael is used to it. There’s no fighting it," she laughed. "Not too many people could put up with it."

It took very little coaxing to make a full-time artist out of Gilhool. She attributes that to her good friend, Pinky, another artist, from Red Bank. Gilhool was working at Edie’s Restaurant on Rumson Road in Little Silver and Pinky was a regular there. This was about 10 years ago. She said she mentioned to Pinky that she painted, and Pinky said she’d like to see some of her work.

"So, I brought some of my things in, and she said, ‘What are you doing here?’ I quit my job that day. It just took one person to say that" outside of her own family.

Gilhool said Pinky taught her how to do faux finishes, and she began painting furniture with them. This led to a job on the rehabilitation of the Paramount Theater in Asbury Park, where she duplicated the marble walls and trim that had been damaged. She worked there for four months.

"I can’t stand doing the same thing for a long time," she said. "I could be a millionaire if I could just concentrate on one thing. But I just can’t do it. It just kills me — repetition."

She said even working in so much red, white and blue during the past year has gone on long enough and she’s reaching to bring in yellow, purple, green and other colors she’s using now in her developing spiritualism art. Although she’s Catholic, she said this art isn’t about religion. She said the spiritualism deals with the colors in her paintings and the meanings behind them.

"Once you look at them, and the meanings behind them, they’ll heal you," she said.

Gilhool said her art is mostly subtly spiritual, although one of her latest paintings shows three crosses on a beach, and explained the meaning of the nines times table.

Her exhibition at the Monmouth Beach Cultural Center included many paintings of flowers, fruit and vegetables and some of beach scenes. One of the beach scenes has a little red wagon in it, born of her memories of visiting Fire Island, where there are no cars and everything too heavy to carry is transported in little red wagons.

She said she chose the fruit and vegetables because of the abundance that Americans enjoy. As for the flowers, "There’s no better artist than God," she said.

In the meantime, her art will be on display in Point Pleasant Beach in an artists’ gallery that’s been created on the second floor over the antiques shop.

And despite her dislike of repetition, she just bought another screen to paint, picked up at an antiques store in the Point Pleasant area.

"It’s a nice size and in perfect condition, and the screen never had been painted, ever, so when I put the paint on, it won’t get clogged up," she said enthusiastically. "And I liked the color of it. It’s a really pretty green. I had to have it. I have no inspiration yet on the picture, but that will come."