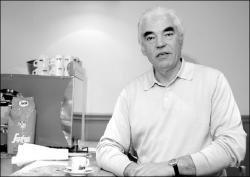 JERRY WOLKOWITZ Michael Bitici talks about the difference in culinary coffee tastes between his New York City clientele and his New Jersey customers.

Michael Bitici’s sweeping gesture took in a table of businessmen enjoying lunch and a family supping together at his newly opened Osteria Dante at 91 Broad St. in Red Bank.

"We have a table of six businessmen and at another table, a mother and father came in with their child," said Bitici. "It’s important that families have a place here."

After presiding over venerable Greenwich Village eateries for close to 20 years, the seasoned restaurateur said he is savoring the change in clientele that reflects the hometown/business mix of Red Bank.

With the holiday shopping season under way, the restaurant will extend its hours until 11 p.m. on weekends and plans to hold afternoon tea-time for shoppers during which the sleek, Euro-style bar will serve coffees, herbal teas and delectable homemade desserts ranging from wholesome biscotti to decadent tiramisú.

The raw bar (known for its marinated salmon), antipasta, pasta and risotto, and fish and meat dishes appear on both the lunch and dinner menus, while sandwiches are featured only for lunch with a variety of fillings piled on rustic breads and focaccia, or served on bruschetta.

"It’s a place you can go to every day for lunch and have something different," said Bitici, who has imported not only a special oven but a pizza chef from Naples.

Diners can enjoy individual pizzas for lunch or dinner with toppings ranging from wild mushrooms to a Mediterranean palette of olives and roasted garlic.

An early dinner hour begins at 4 p.m. and dinner fare includes child-pleasing pizzas designed to encourage family dining, as are prices which range from $8 for an individual pizza to around $35 for a full-course dinner.

"Dinner is for all members of the family," Bitici explained. "It’s important to know that families can bring children for dinner. The other day, three generations of a family were dining. That was a sight."

Bitici said he got his culinary training in the kitchens of regional restaurants in Italy, working his way up to chef/owner. In 1967 he emigrated to America with his family, and within a few weeks was working at New York restaurants like Renato in Greenwich Village.

He and his brothers bought the Tavern, a Village fixture and gathering place for bohemian types, including academics from nearby New York University, in 1973.

"There were always some local characters hanging around," he said.

When the village landmark celebrated its 80th year, Bitici threw a party and invited the restaurant’s steady customers, some of whom happened to include literary lions like Nobel Prize-winning poet Seamus Heaney.

In short order, the Bitici brothers took over four Village eateries, each with a distinct personality. While Minetta Tavern was known for its artsy, bohemian crowd, Toscana was a tonier, more upscale restaurant; Chelsea Trattoria was a bustling lunch spot catering to a business clientele; and Grand Ticino served northern Italian fare to a coterie of actors and authors.

A Greenwich Village landmark since 1919, Grand Ticino was Bitici’s base where, for almost 20 years, his culinary skills nourished the palates and souls of a devoted clientele.

Bitici likes to recount that Heaney would head directly for Grand Ticino after arriving at the airport.

"He would drop his baggage at the bar and exclaim, ‘I’m home!’ he recalled.

Other luminaries included Thomas Keneally, author of Schindler’s List, best-selling authors Frank and Malachy McCourt, and caricaturist Abe Hershfeld, who liked to point out he’d been a patron since 1932.

Loyal customers often became friends, and one such friendship led to a cameo role for the restaurant in a hit movie.

A young New York University film student, John Patrick Shanley, was introduced to Grand Ticino by his college professor and became a regular. Shanley, who wrote the script for the movie Moonstruck (Bitici has the original script), filmed some scenes at the vintage Thompson Street eatery.

When the family was forced to relocate from their downtown apartment following the World Trade Center disaster, Bitici decided to follow his wife’s lead, bringing his New York staff with him, including chef Alexander Alonso and maitre d’ Armando.

"I love the energy of Red Bank. It’s a great town," said Bitici, citing the mix of locals, and out-of-towners who work, shop and visit the downtown area.

"Some of the same clientele is finding me in Red Bank," he said. "They’re very excited to find us here."