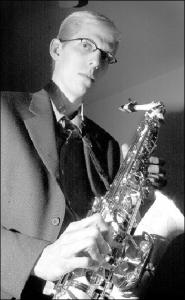 VERONICA YANKOWSKI Scott Wright, a Middletown resident, has played in concert venues around the world. He is now opening a private saxophone teaching studio.

Playing the saxophone has taken Scott Wright to the Hermitage, the Mariinsky Theater, Carnegie Hall, Alice Tully Hall and even, once, to a Wal-Mart opening.

Don’t pigeonhole him with jazzers John Coltrane or Charlie Parker, however. Wright is a classical saxophonist.

Now, he’s moving on to spread the classical saxophone gospel to central New Jersey by opening up his own teaching studio.

Wright, now a Middletown resident, credits playing the saxophone with giving him confidence in his own abilities. "In high school, I was never a good student," he said, "but learning to play the saxophone gave me discipline and confidence that I could succeed."

The saxophonist, who is a native of California, hopes his students will be able to reap the same benefits from playing that he has.

Telling people he plays classical saxophone music has raised more than one eyebrow, Wright wryly admits. However, he is quick to point out that playing the saxophone in a classical setting is nothing new or strange.

He went on to explain that Sax, a Belgian instrument-maker, purposefully created a family of saxophones, including the baritone, tenor, alto and soprano saxophones. Sax’s idea was that just a few players would be able to gather together and have a group of instruments with a full tonal range and, therefore, a full range of musical possibilities.

In fact, Wright said, there are many orchestral pieces that include the saxophone among the instruments in the orchestration; however, most of them are 20th-century compositions and are not commonly performed.

"Audiences like listening to standards," Wright said. "And, since they’re mostly 20th-century pieces, the orchestra would have to spend more time learning the music than if they played the standard orchestral repertoire, which is taught in conservatories. They’re not the familiar pieces that musicians would naturally learn in school.

"The problem with the saxophone is that it doesn’t have the tradition that the piano and violin do. It’s only 156 years old," Wright pointed out.

He said that many classical musicians don’t have the same respect for the saxophone as they do for other instruments such as the violin and piano. He stressed, however, that like those instruments, playing the classical saxophone requires a high level of talent, musicianship and technical ability.

"People think the saxophone is easy because it’s one of the easiest instruments to make a sound on," Wright said.

However, he said, piano and violin are likewise easy to make a sound on but are still held in high esteem in the musical world.

In his experience, Wright said, audiences and musicians alike often don’t realize the potential of the saxophone. As an example, he spoke of an instance in which he played in a saxophone quartet as part of an orchestral tour.

At many of the venues, the director would have Wright’s saxophone quartet play to welcome the audience or to draw attention to the orchestra’s performance.

"Every single time that the quartet played, without fail, two or three people would come up and say they never knew a saxophone could sound that way," Wright said with a smile. Wright went on to say that the saxophone’s reputation as an instrument of classical music is growing, thanks in large part to new compositions and the performances of virtuoso saxophonists.

He started out playing the baritone saxophone as a child. For his skill on that instrument, he won a full-tuition scholarship to college. In his junior year, he began playing the alto saxophone. The following year, Wright, playing the alto, was the instrumentalist winner of the 1998 University of the Pacific’s concerto competition. That same year, Wright’s saxophone quartet reached the final rounds of the prestigious Carmel and Coleman chamber music competitions, and reached the semifinal rounds of the equally esteemed Fischoff chamber music competition. During his college years, Wright played with 12 different undergraduate ensembles. With these groups, he toured all over the United States, playing at a variety of venues, including sports events and at Carnegie Hall.

In 1999, Wright won a seat in the American Russian Youth Orchestra (now the American Russian Young Artists Orchestra). With the orchestra, he toured America, Russia and central Europe, playing in such venues as Tanglewood, Mass.; Alice Tully Hall, New York City; the Moscow Conservatory, Russia; the Hermitage, St. Petersburg, Russia; and the Mariinsky Theater, also in St. Petersburg. In addition to his performing experience, Wright has taught many students, both privately and in a classroom setting. He accepts saxophone students of all ages and skill levels.