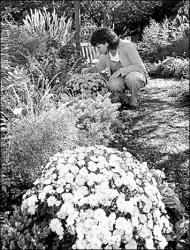 JERRY WOLKOWITZ Danielle Boyle studied horticulture at Brookdale Community College in Lincroft, and at Cook College, Rutgers University, New Brunswick, but she traces her gardening talents to her father.

Just as she tends her perennial gardens, Danielle Boyle has nurtured a natural talent into a garden design company with a growing private and corporate client list.

Owner of Garden Design by Danielle, Rumson, Boyle is unique because she is one of the few women who make their living tending local gardens.

"I march to my own drumbeat," she said, "because not a lot of people do what I do. I’m not a landscaper, I’m a gardener, like Penelope Hobhouse (British garden guru). I mainly deal with plants themselves – any of the materials that go into a garden."

Boyle studied horticulture at Brookdale Community College in Lincroft, and at Cook College, Rutgers University, New Brunswick, but she traces her gardening talents to her father, who managed the greenhouse for Kirchner’s Florist in Keyport.

"It was a traditional business, but businesses like it no longer exist because flowers and plants are all imported now," said Boyle, who became interested in gardening as a result of working alongside her father.

Boyle actually has a parallel career as a counselor at a group home for adults with developmental disabilities operated by the Developmental Disabilities Association of New Jersey. Her social work career, which began in high school, is a source of great satisfaction to her, she said, but the low pay encouraged her to take up gardening to supplement her income.

"I was doing it as a sort of hobby and getting paid," she said of her work designing and installing private gardens. "More and more people saw my work and started asking me to do their gardens, and I was pretty content doing that."

But Boyle’s small-scale enterprise would take a giant step as a result of a garden she installed and tended on Half Mile Road in Lincroft.

The striking perennial garden caught the eye of Chris Cole, managing partner for developer Terranomics, who asked Boyle to revamp the plantings at The Grove, an upscale shopping center in Shrewsbury.

The decision to take on a commercial account wasn’t an automatic one for Boyle, who was reluctant to grow her business to the next level.

"I was hesitant because this was not a business at that point. Now it is," she said. "It wasn’t about money. For me, it’s very spiritual. I have to like you; I work with my clients."

Despite her reluctance, Cole’s appreciation for the aesthetics of her work persuaded Boyle to take on her first commercial job — and the paperwork that came with it.

"It was a big commitment," she said. "The challenge is on the business end. I have to document everything I do by preparing proposals."

Boyle soon realized that she had to translate plant names into a vocabulary the common person could understand.

"I devised a system where I made picture cards for the things I wanted to install and used them to explain my proposals," she said.

At The Grove, Boyle and two helpers rearranged plant materials already in place, and added perennial flowers and grasses with contrasting colors and textures to create informal groupings that would thrive in a public and somewhat hostile environment.

"I picked plants that would adapt to conditions where the pavers and parking lot heat up all day in the summer. It’s tough on plants.

"The challenge is keeping everything hydrated there," she added. "There is no irrigation in the beds, and it takes eight hours a week to water the beds deeply. But that’s the art of my work. Each garden is individual, and you have to know its microclimate and go by those needs."

Boyle believes in beginning her gardens at the foundation. She doesn’t use mulch but rather supplements to enrich soils.

"I believe mulch is a barrier to the natural cycle of organisms enriching the soil," said Boyle, who works the soil by hand. "It’s almost like creating a canvas. It’s like doing a painting with a rich, deep background."

Passers-by take note of her artistry.

"We get five calls a day from people asking who is doing the landscaping at The Grove because it looks more beautiful than ever," Cole said.

Boyle even installed a woodland garden complete with benches.

"I started with the leaf pattern and color of the locust trees, and echoed that in small shrubs and flowers, adding chrysanthemums, daisies, daffodils and anemones," she said.

"It doesn’t happen in one season," she said. "That’s what gardening is about. Perfection is around the corner. What happens in the meantime is something pleasant; it’s a work in progress."

In autumn, Boyle’s work centers on dividing perennials, putting beds to bed and planning ahead — several of her estate gardens will be included on garden tours next season.

"That’s what makes my job unique," she said. "It’s a lot like raising a baby."

About a dozen private clients in Rumson and Fair Haven and her sole commercial installation provide Boyle with a comfortable income limited only by choice of the gardens she wants to take on.

When she started out, she said, she found her gender was a drawback.

"I starved in the beginning because it was difficult to get established being a woman," she said. "If there were two of us bidding for a garden job, the man would automatically get it. I wasn’t taken very seriously. I had to work very hard to prove I could handle the design work and hard labor involved.

A gutsy decision to save a greenhouse from being demolished proved her capability.

"I moved a greenhouse from an estate in Rumson and rebuilt it for a client," she said. "It was one of the few remaining traditional greenhouses in the area and it was going to be torn down. Nobody believed I could do it, but the end result was something amazing."

As her business has grown, so has the caliber of the gardens Boyle tends. "Now I work with people who take it very seriously," she said. "They’re willing to invest and the gardens are long-term projects. I’ve been working on some for five years."

Boyle would like to continue to grow the garden business she’s established and focus on clients who are as committed to garden projects as she is.

"The integrity of the work comes first," she said. "I don’t do a job just for the money at the end of it. I have a freedom that a lot of people don’t have."