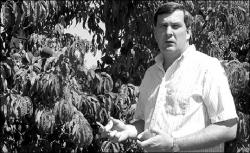 UPPER FREEHOLD — New Jersey peach farmers are waging a battle, not against a common pest, but for the patronage of local consumers.

Rutgers Fruit Research Center officials have released a breed of doughnut peach that is hardy enough to grow in New Jersey.

Overshadowed by Georgia and California (New Jersey is ranked fifth nationally by the U.S. Department of Agriculture in the sale of peaches), Garden State growers have kept their position in the market with the help of the Jersey Fresh marketing program and by forming cooperatives and councils to promote their product.

In their challenge of the peach industry leaders, local growers are also relying on help from an uncommon source, a group of researchers from Rutgers University.

Through their work, research breeders at Rutgers Fruit Research Center, a 250-acre farm located in the Cream Ridge section of Upper Freehold, are hoping to provide state growers with added advantages in the fight for a larger piece of the market.

"Our efforts are to develop new varieties of fruit trees that produce a high quality fruit that will allow for a better end product more marketable for the farmer," said Dr. Joseph Goffreda, director of the research center.

Part of Rutgers University’s Cooperative Extension, the research center was founded in 1963 when the university purchased two local farms in order to expand its tree fruit breeding program, which was started nearly 50 years before. Five of the top 10 peach varieties grown in New Jersey were bred at the facility.

Though staffed by only 10 full-time employees, the center is visited weekly by scientists from the university’s New Brunswick campus who are conducting experiments on-site. Research assistants and volunteers from Rutgers’ Master Gardeners program are also frequent visitors at the center.

According to Bill Sciarappa, Ph.D., Rutgers’ Monmouth County agricultural agent, the state Department of Agriculture and the Cooperative Extension have been encouraging state farmers to grow new varieties of fruits and vegetables to fill the growing demands of niche markets and consumers in search of new and unusual produce.

"It’s much more profitable for farmers to grow different international varieties" of fruits and vegetables, he said.

The research center specially breeds new fruit tree varieties to be disease resistant in order to minimize pesticide use; to have earlier or later growing seasons; to produce fruit with a nicer appearance, better taste and longer shelf life; and to stand up to the environmental stresses common to New Jersey, such as late frosts that tend to kill off buds and humid summers that encourage bacterial growth.

"We try to develop fruit with a good eating quality," said Goffreda. "Our fruit’s got to be competitive."

Hybridization, the official name of the breeding process the center uses to develop new varieties of fruit, begins in the laboratory where researchers extract the pollen from desirable trees. That pollen is later applied to the flowers of selected female trees to produce the hybrid seed.

The new seeds are placed in test tubes with a nutrient-rich solution to help them mature into plantable seeds. The lab produces 5,000 to 6,000 hybrid plants a year. These seeds are grown into seedlings in a nursery and planted in the center’s orchards 3 feet apart in a row.

Once the trees mature and develop fruit (about three years for peaches, four to five for apricots and eight to 10 years for apples), they are studied for resistance to common diseases, general health, appearance, and, most important, fruit quality.

"Our summer job is walking the fields and tasting the fruit," said Voordeckers.

The trees are analyzed and the fruit tested for up to five years; then the orchards are thinned — the best trees are chosen and the rest cut down.

The researchers then have the hardest task of all, choosing which fruit trees are worth reproducing.

"Market demands have dictated near-perfect appearance in fruit," said Goffreda, but taste and texture are just as important to the breeders when deciding which trees to cultivate. The orchards provide a medley of flavors to choose from, including peaches with a light melon taste or even an essence of apricot.

Once several new breeds are chosen, two trees of each are grown in a test orchard. They are again tested and observed for several years to determine whether they will reproduce fruit of the same quality or develop any new problems with disease. The entire process, from seed development to the release of a new variety to the public, can take 15 to 20 years, according to Voordeckers.

Voordeckers, who has worked with the research facility for 37 years, said she is just beginning to see the results of much of her work.

Among the successes she has been witness to was the release of the Saturn peach, a variety of doughnut peach. Developed from a variety of peach native to China but which did not have the hardiness to grow in New Jersey, doughnut peaches are flat, freestone peaches (which means the fruit does not cling to the pit) that have the same flavor and texture as regular peaches.

Through the efforts of researcher Dr. Fred Hough, the Saturn peach was released 15 years ago and is grown successfully in both California and New Jersey, though Goffreda said they have only gained popularity in the past five years.

"The Saturn is the only doughnut peach to ever be released for propagation," said Goffreda. "Stark Brothers Nursery in Missouri is the only nursery with the license to propagate the tree, but it is about to expire, and a lot of other growers have expressed an interest in selling the trees."

Theoretically, the pit of a doughnut peach can be pushed out of the middle. Though after demonstrating just that, and punching a large hole through the middle of the peach in the process, Goffreda said it was rather a messy way to take out the pit.

At present, the research center is trying to develop peaches that will break down slower after they’ve ripened. Known as non-melting peaches, the fruit has skin and meat that are firmer so the peaches will not bruise easily during shipping. The only problem researchers have encountered with the variety is the texture, which they fear the public will not like. Non-melting peaches are usually crisp when ripe, almost like an apple.

The researchers said they are concentrating on developing new varieties of non-melting, low-acid peaches, which have become popular recently because they also ship well and do not soften as quickly once ripe.

"Consumers’ preferences have been shifting from high acid to subacid fruit. We work closely with fruit specialists and county agencies to determine what to study and breed to assist local farmers," said Goffreda. "To some degree we try to drive the market by what we release."

The peach industry is not the only market the center affects. Researchers are also experimenting with apricots, nectarines, apples, hazelnuts, strawberries, ethnic vegetables and integrated pest management (a method of tracking pests and spraying pesticides only in infested areas, preventing the excessive use of chemical agents).

Researchers at the center often travel around the world searching for new genetic stock from which to develop new hybrids.

In 1999, Dr. Goffreda traveled through Uzbekistan in Central Asia searching for new apricot strains from which to develop a hardy hybrid that could survive and produce fruit in New Jersey’s climate.

"Apricots bloom before peaches in the early spring. We have to work on developing frost resistance in the buds," said Goffreda. "Some varieties of apricots that we developed did better than peaches this year, despite the fact that we had late frosts."

At present, a Rutgers graduate student working with the facility is traveling through Russia, collecting new varieties of hazel that might stand up to the effects of filbert blight, a type of fungal disease that damages the trees and prevents development of the nuts.