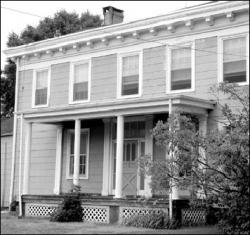 JERRY WOLKOWITZ The Dimeo house, fronting Conover Road, Marlboro, recalls a time when farming was a way of life for many families in the community.

MARLBORO — Stand on the corner of Pleasant Valley and Conover roads and you might think you’re staring at a scene in Marlboro, Ky. — the old red barn with the tractors; the stone silo; the rolling fields of sprouting crops.

Ask anyone involved in negotiations for the land there and he or she will tell you it’s simply an unchanged piece of the township of old. And the plan is to keep it that way.

"I remember this place during the horse-and-buggy days," said Gerard Dimeo, 75, who has farmed the property — not in Marlboro, Ky., but in Marlboro, N.J. — with his brother, Ralph, 83, his whole life. "I remember the first time a guy came riding down from the city in a Model-T Ford."

After four months of negotiations with the Dimeos, Marlboro officials have a tentative agreement in place to purchase the 77-acre property and preserve it for open space uses. The purchase would be the first in a town where residents routinely complain at public meetings about what they see as the rapid pace of development.

JERRY WOLKOWITZ An old barn on the Dimeo property in Marlboro rests on rocks. Marlboro officials are making plans to buy the 77-acre tract.

The members of the volunteer body used their advisory role to give the Dimeo property high recommendations to the mayor and Township Council.

"You’re not known as a home-run hitter until you hit home runs, and this is a huge home run for the township," said Dick, the committee’s chairman. "This is victory No. 1, and the first victory is always the sweetest."

In what Dick often refers to as a race against developers, the purchase could be a boost to the group’s credibility in future negotiations. With this momentum, Dick hopes that when property owners look to sell they will now think of the open space committee first before making a decision.

"We may say no, this property is not right for us, but at least give us a chance before you grab that developer’s check," Dick said.

To Dimeo, who will proudly tell you the exact date his family began running the farm — April 1, 1927 — the thought of his family’s land being covered by cluster housing was too upsetting. But after 75 years of farming the land, the brothers’ ages have made it tough to continue work, Dimeo said. Whether the town decides to build walking trails or a golf course on the property is fine, he said, as long as it’s preserved in some form.

"They honest to God were just fed up with all the development going on around their property," Dick said.

During the night of June 13, the Town-ship Council authorized John Mullan of Bay Pointe Engineering, Point Pleasant, to conduct a survey and an environmental impact assessment of the property. The council members then went into closed session to discuss the negotiations, as they had done several times in previous months. But this time they emerged late in the evening and voted on a resolution which surprised even Mullan and Dick, who went home for the night.

Mayor Matthew Scannapieco was authorized to enter into a "contract for purchase," or a tentative agreement, for the property. Mullan, a Marlboro resident and consultant to the open space committee, said his reaction upon hearing the news was "jubilation."

"Things are looking good for open space preservation, and I’ve got great expectations also for the future," Scanna-pieco said.

Representatives of the Dimeo family first contacted New Jersey Green Acres officials in February, and they in turn contacted the open space committee, Mullan said. On Feb. 28, the council authorized Mullan to begin administrative work dealing with the property. Soon after, a group of Scannapieco, Dick, Mullan, council President Paul Kovalski Jr. and Frederick Raffetto of the township attorney’s office began a series of negotiations that led to the tentative agreement in June.

Over this time, Mullan and the committee continued to pave the way financially for the purchase, seeking Green Acres matching grants.

In late June these efforts were realized in the form of an extra $400,000 in matching funds to add to a previously awarded $750,000. The money will be combined with funds from the township’s Open Space Trust Fund, created as a tax in a 1996 referendum, and other forms of financing in the event of a purchase.

According to Martha Sapp of Green Acres, $52 million in funds were disbursed this year in response to $240 million in requests. Competition was high, and several worthy applications were passed over. Marlboro actually requested $2 million this round, Sapp said.

"Marlboro showed us they were making significant progress, so we wanted to replenish their funds," Sapp said.

All told, Marlboro will have $1.15 million in Green Acres matching funds to put toward the farm’s $4.35 million price tag. To finalize the sale, the council must adopt two ordinances recognizing and allowing the township to purchase the property with an intended use of preservation, historic and recreational uses.

Public hearings on the ordinances are anticipated to be scheduled between July and September, with a closing on the property possible this fall.

If that occurs, the Dimeo family will be allowed to remain on the farm for an unspecified amount of time. The township is expected to keep the property named after the Dimeos.

"I want the Dimeos to be recognized because they are part of the history and tradition of this town and they ought to know about it," Dick said. "These are farmers, and they’ve done this work all their lives. Let them enjoy the fruits of their labor."

Other than the name, little else is definite about the farm’s future. No decisions have been made as far as its specific uses, but Mullan and Dick both said they would like at least part of it to be a public farm like Longstreet Farm, Holmdel. Other uses such as hiking trails have been discussed, but the farm’s border with the land that formerly housed the Marlboro State Psychiatric Hospital presents its own possibilities, should the township purchase the hospital property.

Evaluations will be conducted on the property’s barn, house and other structures, many of which are considered historic, Mullan said.

Appel, who is also a member of the Marlboro Historic Commission, said the Dimeo family’s house dates back to 1860. Local historians refer to it as a "Smock House," named after a family which once ran several area farm properties. Its classic country farm house design is unique, Appel said, because its front and rear were designed identically.

Asked to gauge the environmental condition of the Dimeo farm, Mullan said it is in a pristine state. There are two underground storage tanks used for farm operations, but they are not seen as any threat, he said.

"The value of the property goes well beyond the monetary price that we paid for it," Mullan said.