Life returns to normal
in local ‘tornado alley’
Twister tore through
section of Manalapan
on May 27, 2001 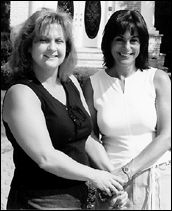 DAVE BENJAMIN Maria Ali (l-r) and Denise Fay, residents of Debracy Court, Manalapan, can smile now that their homes have been put back together following severe damage caused by a tornado that struck their street on May 27, 2001.

MANALAPAN — Residents of Debracy Court in the Ivanhoe Estates development off Union Hill Road are still feeling the effects of a tornado that hit their street a little over a year ago, on May 27, 2001.

The twister came out of the west and struck the homes on Debracy Court at about 7:45 p.m. with high winds and torrential rain. The tornado roughly paralleled Union Hill Road and eventually cut a path across Hawkins Road and Millay Road in neighboring Marlboro before moving across Route 9 and losing some of its power.

On Debracy Court, roofs, windows, trees, bushes and lawn furniture flew in all directions as the twister blew through, leaving residents in a state of panic.

The scene of devastation will not be forgotten by those who were there.

Today, 13 months later, things are almost back to the way they were on Debracy Court.

"Every one of us is back in, and (so are) all the roofs and the windows," said Denise Fay, one of the residents whose lives were turned upside down that May evening. "All the houses are basically put together now. We’re still working on our homes, but the basics are almost completed."

Fay said that while there is some landscaping work to be done, the families that bore the brunt of the tornado were back in their homes just before Christmas.

Fay said she and her neighbors are working on trees and landscaping at the present time.

Referring to all the beautiful landscaping that was destroyed by the tornado, Fay said, "That’s all gone. The only thing that will grow is what we plant now."

When asked how the tornado affected the children who live on the street, Fay said she thought the disaster brought the youngsters together.

"Like now, three of the girls in the cul-de-sac who didn’t always stay together just went out," she said. "They had a half-day (of school) and they went to get pizza."

The tornado seems to have had other kinds of lasting effects.

Recently, Fay said, when tornado warnings were issued for the area and she and her husband were scheduled to go out, her daughters didn’t want them to leave.

"Now, all of us feel extremely uptight," she said. "If we’re out with the kids and there’s a storm, it’s like, are we going to have a house when we get home? If we hear terrible storm warnings, we don’t leave."

Fay said the past year has brought her closer to her neighbors.

"We were in and out of each other’s homes all the time," she said. "This year we had a one-year tornado party. We had all the people over again, and everybody brought food."

Despite the upheaval that the May tornado had on her family members’ lives, Fay is able to put it into perspective when she considers what happened later in the year, on Sept. 11, 2001.

"After Sept. 11, you really put things into their proper perspective," she said. "It was material things, but it was still our home. It was still a tragedy that happened to us and it was very rough on our marriages, on our lives and on our children. It robbed us of a whole year. We spoke about that at Christmas when the neighbors came into my house. It took a good nine months of our lives away, all the things you take for granted, the fun, the going out. The men couldn’t function and couldn’t go to work because there were so many decisions to be made."

Fay said that although some people have since remarked that everything in the Debracy Court homes is new, "We didn’t want everything new. We were very happy (before). We were enjoying our lives with our children. Nobody was working to redecorate their whole home again."

Fay said the year of reconstruction was a stressful period of time.

"We were always waiting for workmen," she said. "We always had men in our house, seven days a week. Everything in my life was disrupted. I would wake up in the morning and there would be a man banging or pulling down wallpaper. I couldn’t even brush my teeth and there were people in my house."

Debracy Court resident Maria Ali said, "We’re glad to be back in. It was rough. It was a hard time."

But, she said, "With what happened on Sept. 11, it’s hard for me to complain. I have my family and my home. It was a hard thing to go through, but the most important thing is that we have our family and everybody is healthy. That’s the main thing."

Fay said the township and its residents came through in the Debracy Court residents’ time of need. She praised Township Committeewoman Mary Cozzolino, the Manalapan Soccer Club and the township recreation board for their help during a difficult time.

"My husband Joe’s whole softball team, the Music Express Devils, came over with food, and they planted trees and flowers right after the tornado happened," Fay said. "Everywhere they saw a hole, they put something in. Pete Bulk, a nursery owner and a team member, supplied the plants."

She also had praise for the township’s construction department.

"Our town was supportive," Fay said. "They made a bad thing into a good thing."