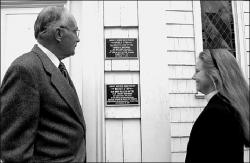 Shrewsbury — It was another step in the march of history when the Rev. Lisa Mitchell blessed two plaques declaring Christ Church’s place on both the national and state registers of historic places.

Mitchell, attired in deep purple vestments, dipped a small branch of boxwood in holy water to christen the plaques at a Dec. 16 dedication ceremony as a prelude to the church’s "Jubilee 300" tercentenary celebration to be observed in 2002.

The historic designation noted on the plaques came years earlier for the Episcopalian church, one of the pillars of the "four corners" at the intersection of Broad Street (Route 35) and Sycamore Avenue. 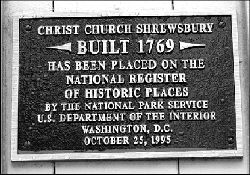 JERRY WOLKOWITZ Christ Church’s place on the register of historic places has been commemorated with this plaque that now adorns the church.

The delay in placing the plaques was due to an extensive $1 million restoration on the building that was occurring at that time. Because scaffolding surrounding the building to repair interior roof trusses wasn’t completed, the plaque dedication was delayed.

According to Mitchell, a dedication of the entire building was done in 1998 following the renovations: "This coming year is our 300th anniversary, so we wanted to get the dedication of plaques done in time for that."

Christ Church was founded Christmas Day, 1702, with the congregation meeting at Tintern Manor in Tinton Falls. The original structure at the site of the present church, a small brick building to the left of the present structure, was built in 1733. The present building was completed in 1769.

As the congregation and its sister congregation in Middletown expanded, both parishes received 500 acres of farmland or a "glebe" bequeathed to them by William Leeds Jr., a church founder and prominent member. When the parish sold the remaining glebe in 1906, it exhumed William Leeds’ body from his house in Swimming River (Lincroft) and moved to the left front of the Shrewsbury church. A presumably original Indian deed to Leeds’ estate dated 1684 was recently unearthed in the structure.

"We do have a 300-year history, so some of our objects are very interesting," said 22-year parishioner Bob Kelly who serves as chairman of Christ Church’s historic objects commission.

The tedious task of renovating the graveyard has been performed the past year by Toms River resident Trevor Kirkpatrick.

Kirkpatrick has worked weekends identifying fragments of gravestones dating as far back as the 1700s, and placing them back with their original stones. Surrounding the graveyard and church is a white picket fence dedicated in 1988 to Muriel E. Wilson and former Shrewsbury mayor, the late Dorothy Blair Manson, also the first female vestry person at Christ Church.

Steeped in history, the church possesses several intriguing artifacts. Mitchell still uses the original silver communion service given the parish by Queen Anne in 1708. A local newspaper dated 1844 stating "This Church Called Christ Church as built of stone and rebuilt of Wood about the year 1760" was discovered in a time capsule during renovations in 1963.

One of the most famous items in the church is the "Vinegar Bible," of which there are less than two dozen in existence. The Bible was used in services until 1916 when it was placed on display.

The exquisitely engraved 1717 Bible printed by John Baskett, is occasionally referred to as the "Baskett-full of errors," due to several typographical errors. The most famous of these mistakes is seen in the Book of Luke, with its "Parable of the Vinegar," or "Parable of the Vineyard"!

Another unique feature present in the church’s tower until 1982 was a gilt iron English crown. Despising English nobility during the Revolutionary War, American soldiers riddled the crown with musket balls. The crown was originally housed with the cupola, bell, and weathervane in the tower; the crown is now on display in the parish house.

According to Kelly, the church plans to coordinate with the Shrewsbury Historical Society to create an exhibit of the church’s many artifacts, either at the society or in the parish hall.

Christ Church was previously headed by the Rev. James LaSage until perpetually youthful Mitchell assumed her duties in August 1997. When asked about her new parish, "Mother Lisa" as she is known to her congregation, commented "Shrewsbury is a great place to be. I love the parish and I love the community."

Asked about her decision to enter the ministry, the native Oklahoman said, "I grew up in a church where there were no ordained women, so it wasn’t a possibility and didn’t even enter my mind."

However, after the church began ordaining women in 1975, Mitchell, with a degree in microbiology from Oklahoma State University in hand in 1982, went on to pursue her master of art degree in theology from Fuller Theological Seminary in Pasadena, Calif. She then received her master’s degree of sacred theology in liturgy or STM from Nashotah House Seminary in Nashotah, Wis.

"It’s nice when you’re at the altar now and the little girls in pews actually think they have the opportunity of ministry open to them," she said.

Mitchell led congregations in Los Angeles and Oklahoma before coming to Shrewsbury, where she lives with her husband, Clay, and children Clare, 8, and Colin, 10.

Several luminaries have visited Christ Church, among them President Ulysses S. Grant, who attended the church building’s centennial celebration in 1869; and the Bishop of London, the Right Rev. Gerald Ellison in attendance for the 275th anniversary of both the Shrewsbury and Middletown parishes. President Richard M. Nixon also sent a telegram in 1969 congratulating Christ Church on its building’s 200th anniversary.

Parishioners, in anticipation of the tercentennial celebration, have spruced up the property with extensive plantings, including 31 small evergreens donated by John Flemer of F&F Nurseries in Holmdel. Several "Jubilee 300" events are planned, to commence with an 18th-century worship in January.

The rite, based on the Anglican Book of Common Prayer, will be led by Mitchell. Historian Timothy J. McMahon of the N.J. Historic Preservation office will enlighten parishioners on religious, social, political and economic life of the 1700s following Mitchell’s service.

A "jubilee choir" will be established consisting of parishioners from the Shrewsbury congregation and that of Christ Church, Middletown, who will perform concerts during the yearlong tercentenary celebration.

The Christ Church newsletter, The Crown, has also added the column "Did You Know?" to keep the congregation apprised of "Jubilee 300" events.