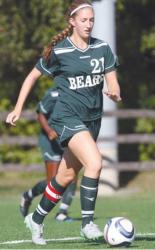 A senior at East Brunswick High School, Greenspan has more than kept up with what can only be described as a feverish pace, combining rigorous academics with an equally demanding extracurricular agenda. When it finally concludes with graduation in June, she will have a future filled with wondrous opportunities.

Grade-wise, Greenspan has achieved a 4.2 grade-point average and has earned numerous academic honors. In addition, she had played a variety of sports throughout grade school and, when arriving at the high school, she narrowed her athletic focus to soccer and basketball after a short fling with golf her freshman year. Greenspan credits her sports endeavors for much of her academic success.

“Varsity athletics have taught me how to manage my time wisely,” she said. “I was able to develop structure, and I’m now more organized. I’m constantly planning my time so things get done.”

Those extraordinary organizational skills are what enabled Greenspan to tackle a schedule filled with Honors and Advanced Placement courses and be an active member of the French Honor Society, National Honor Society and Class Council.

Because of her classroom achievement, Greenspan has compiled a list of over 10 colleges located predominantly on the East Coast where she could matriculate, some of which she has already visited.

When it’s time to make a decision, Greenspan knows she wants to major in civil engineering, environmental engineering and sustainability or urban design and development — certainly a challenge for any student, particularly so since she plans to continue playing sports.

“I don’t have a favorite sport because I truly love both soccer and basketball,” Greenspan said. “Right now, I’m leaning toward basketball, but what’s most important is dedicating everything I can to help my teams win.”

An important lesson Greenspan learned through athletic competition is that team unity correlates to a winning attitude.

“Whether it’s soccer or basketball, I’m very big on chemistry, and the way to build that is through bonding activities outside of practice and games,” she said. “I love making friendships that extend beyond athletics.”

The bottom line, she said, is that a positive mindset leads to team success — a quality that is obviously part of her makeup.

Her self-assurance is most noticeable on the soccer pitch and basketball court and is sometimes mistaken for aggressiveness. Watch Greenspan closely, though, and it’s clear she carefully considers every move she makes.

It was that mentality and natural ability that transformed her into a valuable defender in front of the East Brunswick goal during soccer season and earned her a spot on the Greater Middlesex Conference (GMC) All-Red Division team.

Now that basketball season has arrived, Greenspan posts up in the paint as the Bears’ pivot player. In East Brunswick’s season-opening 72-30 victory over Edison High School Dec. 18, she deposited a team-leading 20 points and will be counted on to deliver similar performances as East Brunswick hopes to return to the GMC’s upper echelon.

Much of her athletic prowess derives from sheer talent, but Greenspan has applied the same work ethic that made her an outstanding student to improving her skills in the competitive arena.

“I view practices or games as opportunities to improve individually and as a team,” she said. “[As a captain], I try to lead by example, keeping a positive attitude, displaying good sportsmanship and working hard. I hope by doing this, younger players try to emulate my intensity.”

Of course, playing varsity sports places huge demands on her time in and out of season due to camps, practices and games, which brings into question how Greenspan is able to be active outside of sports.

“I try and dedicate as much time as I can to the clubs, and that doesn’t just mean meetings after school,” she said. “I’m often tutoring students, completing community service projects and volunteering at summer basketball and soccer camps for kids with special needs.”

Greenspan credits her family and coaches with providing unconditional support so she could achieve success early in life. Her parents, Nadine and David Greenspan, have always transported their daughter to and from practice and have been her biggest fans. Her father has also coached many of her travel teams, and her brother, Jared, an excellent athlete himself, has been a willing practice partner helping her test some of the new skills she’s learned.

Kevin Brady and Keith Lane, who coach soccer and basketball at East Brunswick, respectively, have also instilled in Greenspan the importance of learning fundamentals and sportsmanship.

Moving forward, though, it’s the young lady herself who deserves much of the credit for what she has become at this stage of her life.

“When I was younger, I did every activity, from competitive dance and gymnastics to soccer and basketball,” she said. “Eventually, I had to make a decision about what route to take in my life, and I chose the sports I play now. It’s probably the best decision I ever made. I love the thrill of competition, knowing that I am always in shape and building relationships with a diverse group of girls.”

It is, to say the least, a very fulfilling life.